“A lot of the exhibitors have orders on backlog and they’re trying to get machinery to the mills, so it’s a great situation,” said Rich Donnell, show director of the 2018 Timber Processing and Energy Expo (TP&EE), when asked about the state of the industry. 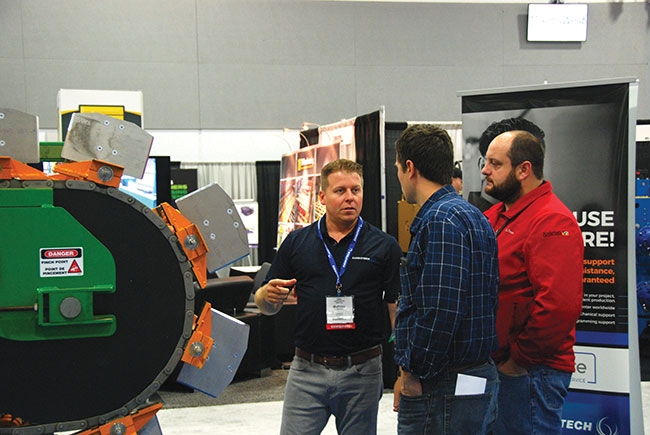 That sentiment was echoed on the show floor as CFI spoke to different manufacturers at TP&EE, which took place from Oct. 17-19 at the Portland Exhibition Center in Oregon. The show, produced by Hatton-Brown Expositions, saw nearly 200 exhibitors showcase their newest products for over 1,000 attendees, and also featured two educational streams: mass timber and lumber manufacturing.

Canadian exhibitors were also in full force at the show, including big players like BID Group, Samuel Packaging Systems Group, VAB Solutions Inc., and Simonds International. A number of these larger manufacturers also spoke about new or planned installations throughout Canada.

For example, VAB Solutions – now represented by Timber Automation – recently installed its new all-in-one lug loader/fence/trimmer, Opti-Trim, at Groupe Lebel in Quebec. The Opti-Trim is an automated solution that produces every length of board in one production shift, and can process boards at a maximum speed of 220 boards per minute.

The automated revolution
Looking around the show floor, the Opti-Trim was not the only automated solution on display. Multiple manufacturers offered new mechanized products to help optimize sawmillers’ operations.

In fact, automation emerged as a key trend during the conference, with a number of the educational sessions touching upon the topic, including the presentation, “Rising from the Ashes: Update on Swanson Group’s New Plywood Plant with Meinan Automated Green End,” by Steve Swanson, president and CEO, Swanson Group, and Anna McCann, president, Merritt Machinery.

Swanson and McCann provided an update on Swanson Group’s plywood plant in Springfield, Ore., which features Meinan Machinery’s automated lathe line, and shared how it has positively impacted product quality, costs and more.

The fourth industrial revolution
But it’s not just automated technology that can benefit plants and mills. The data provided by the Internet of Things (IoT) devices, particularly sensors, is becoming a critical part of operations.

IoT devices provide data to users over the cloud or other networks.

According to McCabe, IoT presents an opportunity for businesses when it comes to mission critical maintenance procedures, which in turn creates financial benefits. For example, a thermal sensor can be programmed to know the typical operating temperature of a bearing and warn operators when it becomes too hot.

“Just by knowing the temperature of a bearing, you can prolong its life from a few months to a few years,” McCabe said. This means saving on the cost of replacing the bearing, as well as repairing the damage it could have caused, and minimizing downtime from unplanned maintenance.

And TradeTec is not the only company that sees the value in using IoT. Other companies, such as Wolftek Industries, displayed thermal cameras and sensors that can help keep mills and plants safe, and prevent breakdowns.