When Todd Manuel decided to switch from wood hauling to harvesting in 2009, he knew he was taking a risk. Manuel went to auction and purchased a second-hand grapple skidder and second-hand harvester and his company, Big Timber Ventures was born. 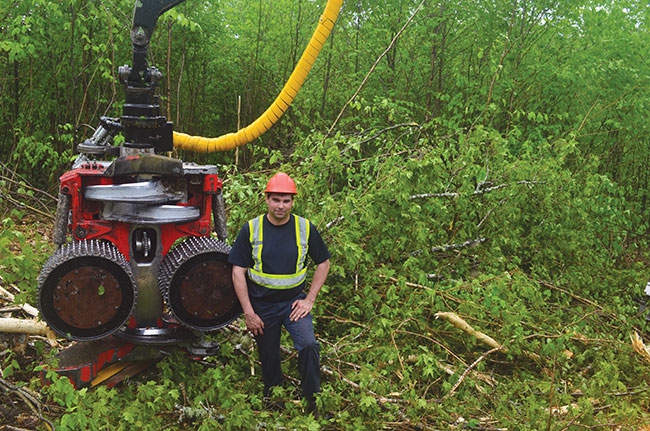 Fast forward to 2015 and, so far, his gamble has paid off. Operating out of Lansdowne, N.B., his company cuts a combination of softwood and hardwood for Crabbe Lumber in Florenceville-Bristol, N.B. Most of the trees his operation harvests are fir and spruce logs.

When Manuel’s first harvester – a converted excavator – needed to be replaced in 2013, he decided to try going with the combination of a Tigercat H855C harvester with a Logmax 7000C harvester head.

When a few of the harvesting contractors in the area moved to Quebec in 2014, Manuel decided to use the opportunity to grow his business again, and invested in a Tigercat 845C feller buncher with another Logmax 7000C harvester head in November 2014.

He says his last two upgrades have significantly improved his operation.

Each of his machines cuts close to 150 tons of wood per week on average, depending on the kind of wood that’s being harvested. The hardwood in his current harvesting area around the southern Johnsville region poses the biggest challenge for him.

“Sometimes it can be fairly big, burly, limby stuff, and the price per ton that I get paid is nowhere near as much for hardwood. [Starting in May] I cut 90 per cent hardwood for the first month or so, after we go back to work. It’s the most challenging time of the year. I would say half my income comes from January, February and March, for the whole year.”

Although the hardwood trees pose a bigger challenge than the softwood he harvests, he says they are “no match” for the power of his Tigercat-Logmax combinations.

He says his favourite thing about his upgrade to Tigercat machines is their track power.

“The Tigercats are a far greater machine,” he says. “It goes through the woods so nice. Track power, lifting power, it doesn’t have any issues with power. It’ll do whatever you need it to do. My old harvester had a lot less horsepower, a lot less hydraulic power, swinging power and track power. You’d go up against a big rock or a big stump somewhere in the woods, you had to pick yourself up and pull yourself over it. With the Tigercat, you just put the pedal down and go.”

Manuel is also impressed with the durability and versatility his Tigercat-Logmax combinations provide his operation.

“I’ve only owned one other type of machine and I don’t know about some of the other brands, but I firmly believe that Logmax is the most versatile that’s out there.”

He says the equipment works so well he doesn’t think about looking at other brands.

“I have no reason to switch,” he says.

Manuel currently runs about nine employees in total, between his wood hauling trucks and his harvesters. He runs 10- to 12-hour shifts, five days a week.

“I tried running double-shifts last winter, but good operators are hard to find around here,” he says. “I found that when we ran 24 hours from about Christmas time until around March, that we didn’t cut enough wood to justify the extra fuel, the extra hours and extra man.”

Manuel hopes that his latest Tigercat-Logmax addition will be able to boost his production in a similar manner to his upgrade in 2013.

“I hope to double my production again,” he says.