Nov. 25, 2016 - Automation in mills means more accuracy, fewer mistakes and, eventually, a large return on investment. That was a clear message touted at many booths at the Timber Processing & Energy Expo (TP&EE) in Portland, Ore., Sept. 28 to 30.

Close to 2,700 people descended on the Portland Exposition Center, including more than 500 Canadian show-goers from six provinces. The number of attendees was a good sign for the industry, says show director Rich Donnell.

“We were very pleased to not only maintain the attendance numbers of two years ago, but to show some growth in numbers, especially given the number of mill closures and consolidations in the Northwest during the past two years,” he says.

“We worked very hard to bring the veneer and plywood companies and technologies into the show, in addition to the strong base of lumber manufacturing that always participates, and it was great to see the number of veneer and plywood firms who did attend. I also heard several comments from exhibitors who were pleased at the geographical range of attendees who attended from Maine to the deep South.”

This year’s event was the third TP&EE put on by Hatton-Brown Expositions, LLC, an affiliate of Timber Processing and Panel World magazines. Donnell, who is also editor-in-chief of Hatton-Brown Publishers, says attendance increased about 10 per cent from the 2014 show, which was also held at the Portland Exposition Center.

Dozens of Canadian companies were among the 220 exhibitor booths showcasing their products in the 61,000 square foot show space.

Peter Allen, president of Vollmer, says from his perspective, while there are few mills opening, older mills are seriously investing in automation and technology that makes it easier for employees to work.

“We all know that the biggest hassle for all companies, myself included, is staff,” he says. Automation helps companies keep the right employees, and maintain a high standard of accuracy and efficiency. Vollmer creates automatic saw filers and grinders, and featured several products at TP&EE, including its GPA 200 stellite tipping machine, the RC 110 benching centre, and its CHC 840 and 1300 and CHF 840 and 1300 model sharpening machines.

For Vollmer, the Canadian market for automated machinery is stable, Allen says. “It’s not breaking any records, but it’s stable.”

BID Group’s vice president of operations, Simon Potvin, agrees that eastern Canada is stable, but that the West is slowing.

“The western Canadian market for sure has been slowing down a lot. As a company, doing cap-ex projects for our customers, it has been a lot slower. The East has been steady for us. Not great, but the equipment there is old, most of the sawmills were built in the ’80s and ’90s and some of them are two generations out in technology. They have to invest. So we’ve been upgrading a lot of mills; smaller projects, but a lot of them going on all the time.”

Automation aside, another interesting machinery trend seen at TP&EE is a move to electric or pneumonic. Hydraulics, it seems, are going out of fashion. USNR’s new ElectraTong lug loader is a new all-electric option for random width and thickness, and the company has already sold seven across North America, four in Canada and three in the U.S.

“The big key feature is that it’s all electric,” Thomas Congdon, engineering manager for USNR Salmon Arm, explains. “No hydraulics, no air, and with that we can do a lot of special things with timing and how hard we pinch the board.” The electric design is powered by five servos, one for each tong shaft, which allows the machine to go well over 250 lugs a minute in all applications and all grades.

Canadian Forest Industries interviewed Congdon on the ElectraTong Lug Loader, along with three other product managers at TP&EE who highlighted the features of their equipment, including Comact’s GradExpert, USNR/Soderhamn Eriksson’s CamShift Modular Debarker, and Autolog’s Prograder Linear Planer Optimizer. Watch those videos – and read a Q&A with BID Group’s vice-president of operations and former communications manager about their outlook on the Canadian and U.S. markets.

Scan head for carriage headrigs
JoeScan has released the newest scan head in its JS-25 X-Series, the JS-25 X6B. The JS-25 X6B is a high-performance, six-laser scanner, specifically designed for high-density, snapshot-scanning of logs on carriage headrigs. Each JS-25 X6B scan head can be mounted end-to-end to scan any length of log on six-inch spacing.

The JS-25 X6B was designed to make it easy for optimizers and sawmills to upgrade obsolete carriage scanning systems, often reusing the existing scan frame. The JS-25 X6B requires only 24VDC and an Ethernet connection for operation. The scanner’s Ethernet interface allows the optimizer to communicate directly with the scanner without special hardware. As with all scanner models, the JS-25 X6B is backed by a five-year warranty and a 10-year support life policy to protect against obsolescence.
www.joescan.com

Sawmill lug loader
Carbotech’s rotary lug loader uses pneumatic rotors to activate a variety of clamps without using any hydraulic. In 2007, Carbotech acquired the know-how and patents of Gemofor. Based on that well proven mechanical technology, Carbotech has been R&D a revolutionary upgrade focusing on skew control.

Thanks to Cognex reading capacity, Carbotech has modified its lug loader operation so all clamps, all stop gates and all wheels are now activated independently. This means only the infeed lengths of timber will dictate which clamps and stop gates need to be activated.

That new system is now supported by the latest version of M12 connectors to ensure the quickest and most reliable Ethernet communication to an integrated PLC on the lug loader 2.0.
www.carbotech.ca

A recent confidential installation of the Air Board Tracker found the technology allows for speeds of 1,550 feet per minute, and 145 millions of board feet of timber. Estimated gains from replacing marking guns and reading system with the technology is about $20,000 a year, and, with 100 per cent reading efficiency, the quality gains are estimated at $200,000.
www.vab-solutions.com

Modular debarker
USNR/Soderhamn Eriksson introduced its CamShift Modular Debarker at the show. The module-designed CamShift system can be delivered with or without flare reducing, and with one or two debarking rotors.

The CamShift 600 offers both log-releasing tools and tool pressure adjustment during operation. The manually adjusted flare reducer rotor is infinitely adjustable for reduced diameters up to 560 mm (22 inches). The modular, pull-out design makes for easy set-up and tool changes. Variations are available to accommodate minimum log length and top or butt-end feeding.
www.usnr.com

Electric Lug loader
The all-electric ElectraTong Lug Loader from USNR was also on display at the show. The new lug loader offers excellent board control at high speeds, and excels in random thickness applications. It does not require incoming backlog pressure to deal the board. Instead it has the ability to pick a piece off the infeed belts with no backlog forces.

Because no backlog pressure is required it handles feathered edge material well, and is coupled with a MillTrak backlog sensor for backlog control. All-electric design allows increased tuning for batch configuration capabilities. Operating speed is 250 plus lugs/min. in planer mill (dry) applications.
www.usnr.com

Circle saw tip and profile sharpener
The new Armstrong 25 CNC circle saw tip and profile sharpener from Simonds was on display at TPEE, showing off its easy user interface. The machine is programmable for tooth shape, feed speed and grinding amount. Simple controls make for easy operation and set up for profile grinding or tip grinding. The sharpener is used for carbide seat gumming, sharpening with conventional abrasive, carbide tip sharpening and PM12 sharpening with super abrasive.

Automated grader
Comact brought its newly launched generation of its automated grader for lumber, the GradExpert, to the show. The new GradExpert generation offers improved features designed to increase productivity and user-friendliness, in addition to its new modern look.

New tested and proven technologies feature 100 per cent vision of the board, high-definition colour images, LED lighting, latest-generation electronics, in addition to the same knowledgeable and experimented team that lead our projects to success.

The Comact team has made sure that all of these new technological developments are available to first-generation GradExpert owners, so that they can also benefit from the enhanced capabilities.
www.comact.com

Linear planer optimizer
Autolog’s Prograder Linear Planer Optimizer was featured at TPEE. The optimizer is a complete optimization system for automatic lumber grading, and has a new colour camera with a higher resolution and better colour sensitivity.

The system uses tracheid data to detect knots, works on low contrast knots (blond knots) and reduces false detection to almost none. Geometric, vision and tracheid sensor scanning improves precision of the system, which can significantly increase value and production to realize packback in less than a year. The compact machine is reliable and fast to identify difficult to detect defects and improve high-grade ratios.
www.autolog.com

Stellite tipping
Vollmer showcased its GPA 200 CNC machine for automatic stellite tipping for circular, band, gange and mini gang saw blades has a compact design with integrated components. The machine tips blades using the plasma welding technique with inert gas that guarantees a strong and homogenous fusion between the stellite and the substrate.

The GPA 200 has a robust design, simple operation and cost-performance ratio. The diameter of stellite is adaptable according to type of application, which makes this machine the economic. A sold central block makes the GPA 200 robust, precise and resistant to vibration. The cooling system, welding apparatus and annealing station unit are fully integrated in the machine.
www.vollmer-group.com 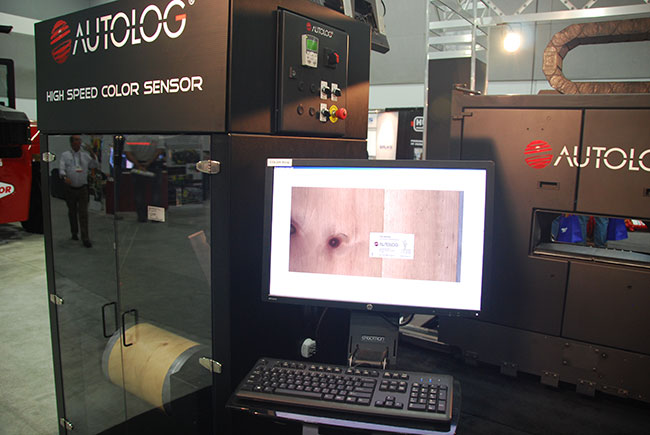