May 15, 2014 - Deep down a logging road, a couple hours north of Thunder Bay, Renewable Forest Products is making another pass over a cut block to recover fibre for the biomass boiler at Resolute Forest Products’ pulp and paper mill in Thunder Bay. It’s a new operation that required a hefty investment but for owner, Mario Letourneau, it’s one of the operations he likes most.

Letourneau has been in the industry for 30 years, 14 of which have been with his son, Dave, at their operations based in Thunder Bay, Ontario. He calls it a stump to dump operation that involves forestry planning, the annual work schedule, five-year plan, road building, harvesting and hauling. Letourneau owns two logging operations, Marcri Logging and RFP, both of which are run by the father and son team and have more than 150 employees on staff.

Letourneau’s sole client is Resolute Forest Products, which has a sawmill and a pulp and paper mill in Thunder Bay.  Letourneau decided to form RFP for expansion purposes, giving him the flexibility to seize the opportunity when demand for forest products began to grow. Now, RFP cuts 400,000 cubic metres of wood fibre and it all goes to Resolute in tree length or chip form.

RFP works with John Deere feller-bunchers, delimbers and skidders. Road building is a combination of John Deere and Caterpillar with primarily Western Star trucks. Chippers and grinders are Peterson Pacific.

“I’ve been dealing with John Deere for the past 30 years. We’ve developed a pretty good relationship and I really like the equipment,” explains Letourneau. “They’re up to date on what they’ve got - good product support as well.”

In the boreal forest north of Thunder Bay, RFP harvests primarily spruce, balsam, jack pine and poplar with the occasional birch that’s required to meet forest management planning guidelines. The trees aren’t usually much more than eight inches in diameter. The size of the cut blocks vary depending on location.

“If you’re in the Spruce River Forest on the North end, it’s caribou land so the cutovers are bigger than they would be closer to Thunder Bay,” said Letourneau.

It isn’t easy to staff the operations, Letourneau explained, since he can’t compete with mining and the oil patch for workers. “Machine operators and mechanics, more specifically, are very hard to get. The people we have are the people who have been with us for a while and people who prefer to stay rather than go away.”

The recent downturn was a painful one for operations like Letourneau’s in Northwestern Ontario. “We used to harvest over one million metres a year and we were down to quite a bit less than that. It had a severe impact on us but things are slowly trickling back to normal.”

When the industry contracted severely over the downturn, workers left for other industries or other parts of Canada making it difficult to find the workforce to grow back up when demand returned.

“We had to buy several trucks because we used to have brokers but those people have either gone out of business or they’ve moved on to another business or another province. We had to purchase a lot of trucking power and it has been tough to ramp it up.”

But Letourneau has high hopes for this year and the next few years as construction is gearing up in the U.S., placing a higher demand on Canadian lumber. “There’s always a downturn every 10 years or so but for the next few years, things are going to be good.”

In the meantime, Letourneau has been adding operations to take advantage of the increased demand for forest products. When Resolute installed a condensing turbine to power its pulp and paper mill and sell power back onto the grid, it needed some contractors to invest in grinders to supply the biomass required.

Letourneau bought the grinder, loader, skidder and eight trucks to bring the loads of biomass to the mill. The investment was significant but the operations have been a good fit for RFP.

It didn’t take long for Letourneau to come up with a system that worked well with his team. He learned that doing grinder prep work is key. “When we’re chipping, we’ll pile the debris in one area so when the grinder comes, it’s all there, we don’t have to chase it.”

For biomass, the tops, some slash piles, chipper debris and birch are all run through the grinder and loaded onto the trucks to be taken to the storage yard on site at the pulp and paper mill. RFP delivers eight to ten loads of this biomass mix from Monday to Friday. Resolute collects over 300,000 tonnes a year of biomass to burn, which they mix with bark and sawdust from their sawmill.

At the logging site, Canadian Forest Industries had a chance to speak with the grinder operator to see how the job was going on a clear, cold day in November. He was working on a pile of chipper debris that had been there for about a month, allowing it the chance to dry a bit. Sitting in the loader, he was picking up piles of debris and shaking it up before dropping it into the large blue Peterson Pacific grinder that was spraying the ground-up biomass into a truck. We watched him for about 15 minutes before the truck was full. A skidder pushed the truck back up the muddy, sloped road for the trip back to the highway.

“So far so good,” said Christian Meier, the operator. “It’s a new machine. As long as you don’t put the big rocks in it, you’re good to go.”

Meier is a man of many trades. He grew up on a farm, worked in logging operations and just about any other job that came along before coming back to forestry. He’s happy to be the one running the grinder and playing with all the big toys in the forest. “I get paid to go do what I did when I was a kid!” he grins broadly.

Martin Kaiser is the Fibre Optimization Manager for Resolute’s operations in Northwestern Ontario. He sees the grinding operation as a natural fit for many of Resolute’s contractors. “They’ve built the same amount of road, they’ve harvested the same amount of area but they’re able to use more of the fibre from the roadside so the volume they’re getting for their effort has increased and their profitability has improved.”

Historically, much of the material that is run through the grinder would have been returned to the cutover. The tops and limbs used to be gathered in piles and burned at the roadside.

The idea of adding a grinder to a logging operation has had mixed reaction from Resolute’s contractors, Kaiser explained. But Letourneau quickly saw the potential.

“He already had an integrated operation,” Kaiser remembers. “So right away he saw the benefit. We were joking when I first saw him that this is the moneymaker. So for some it was very clear right from the start that this was a good idea. For others, it took a little more convincing. Some people are just more cautious and they come up and see this, get a bit of information and it took a little while to get into it themselves but now they’re in.”

Letourneau is pleased with his decision to grind the slash for Resolute. It’s an investment that will pay back even when another recession looms for our southern neighbours. Construction crews may not always be building new homes but in the cold, dark winter, the citizens of Thunder Bay will always need to keep their houses warm and the lights on.

“It’s a good addition to what we’ve got. I was one of the first who jumped into it and maybe everyone thought I was a little bit too quick but I think it’s been good for us. We like it.” 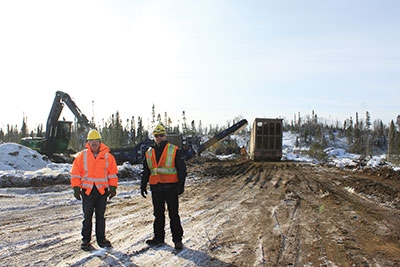 Father and son Deep down a logging road
Print this page