It was 2005, and two young climbers on Vancouver Island decided to go into business. Bridger Schmidt and Jason Kemmler, along with Kemmler’s father, Sig, became partners in Alternative Forest Operations (AFO), based in Duncan, B.C. Sig had a 20-year career behind him as a helicopter logging consultant, but the two younger partners brought only their passion for climbing trees.

Windfirming was their specialty and their bread and butter at the time, working for licensees who had harvested their land but needed to protect certain features, like streams, fish bearing creeks or even culturally-modified trees that were significant to First Nations communities.

With the goal of minimizing blowdown to protect these features, five climbers limbed and topped trees around the feature, basically thinning the canopy to reduce or eliminate blowdown. Work of this type was pretty close to heaven for Schmidt and Jason at the time.

“It was perfect, just the climbers and their saws, and we would usually be up in the tree canopy for the entire day,” Jason recalls.

Windfirming is still a big part of the company’s business. Schmidt figures they have about 95 per cent of the market on Vancouver Island, manually pruning between 25,000 and 35,000 linear metres every year. The company also moved into harvesting work as well, but again not your average jobs. As more and more of the “easy spots” are logged, licensees are targeting areas that were once less desirable or more sensitive, by necessity. That’s where AFO comes in, and much of their work involves remote access.

Skylogging
One particularly expensive and specialized tool used in many of the company’s other specialized services is their helicopter. Choppers are key to the company’s single stem harvesting service, a unique form of helicopter logging where the team is finding and cutting single quality trees – some as high as 46 metres – mostly used for telephone poles.

Single stem is precise work. The company’s engineers select stems and provide each with its own number, using a combination of GPS and old-fashioned forest knowledge. Climbers armed with chainsaws – sometimes swinging from tree to tree – climb the stems, cut off all the limbs and cut the stem to a specific height.

The next stage is jigging, which is performed by a certified faller. Jigging requires the faller to cut the tree very precisely to keep it standing, so that a helicopter can pluck and remove it, and only it, from the forest floor. This sometimes means leaving only a 1.5-centimetre strip in the middle of the tree.

In the final stage, the helicopter finds the stem and removes it with a large grapple, flying the stem to the landing for the trucks. Thanks to the helicopter, the stem never needs to touch the ground.

Since helicopters are used in much of its work, the company’s staff has become very skilled at heli-pad construction, and have cleared and built over 450 of them for clients in the forestry and energy sectors, often to very precise and demanding specifications. The work involves clearing an opening through falling a selection of tress, and then using some of that material to build the pad to allow safe crew access to remote areas. Still, like much helicopter work, it has its market ups and downs.

“Helicopters allow you to log tough spots and it’s a quick way to get volumes of wood on the road,” Schmidt says. “But with inflation, and gas prices especially, it’s causing people to look at conventional logging options more closely.”

“We might be back to horses and sleighs again at some point,” jokes Jason.

The geography and timber profile on Vancouver Island and the surrounding mainland requires the company to use some uncommon gear. Operations manager Kevin Healey, who manages the company’s falling operations, designed a “claw” – a unique tool which permits climbers to move from tree to adjacent tree while staying up in the canopy, minimizing the number of times climbers and tools must travel up and down the stems.

In its higher volume logging operations, the company uses a radio-controlled carriage yarding system, centred around a “Skycar,” made by Boman Motorized Carriages in Oregon. The carriage transports timber via a suspended steel cable, kind of like a zip-line for logs, and can transport it to a clearing for removal by truck or even helicopter, if necessary. This technology provides a more environmentally friendly way to remove trees from remote, steep or otherwise inaccessible areas. While it may seem exotic to loggers outside of the west coast, it is in fact one of the crew’s more mainstream systems. Still, for AFO, that’s a relative term.

“This type of logging has been pretty rare,” Jason notes.

He estimates that only two contractors on the coast are currently able to perform work in this manner, but that this type of logging is making a comeback.

“The challenge is finding enough skilled manpower to do it,” he adds. “Very few people have the experience with this specific equipment in this specific terrain.”

The crews also rely on less exotic but no less crucial gear – its saws. Alternative Forest Operation’s team are devotees of STIHL MS 200 topping saws for their work in the sky, and the jiggers use MS 660s for jigging and falling, due to their strength and reliability in extreme conditions.

“I can’t imagine any forestry work that gives this equipment more of a workout than we do,” Jason admits.

STIHL routinely consults with professional loggers and arborists worldwide in developing its equipment – much like they have with the MS 201 and MS 661 C-M chainsaws – the most recent additions to the company’s lineup.

“We recognize that these guys are working in gruelling conditions, whether it’s in the heat, cold or wet weather,” says Jeff Loosemore, marketing manager for STIHL Canada. “We simply must give them a chainsaw that’s built to last.”

At times its workload marries its skill set with commercial. AFO recently spent four months working at Nanaimo Airport. Transport Canada modified the angle of approach to the airport, so topping and pruning of specific areas was required to make sure the proper sight lines were clear.

“This kind of so-called residential work might normally be undertaken by a crew in bucket trucks, but we can apply our forestry-based skill to get it done precisely, and very safely,” says Schmidt.

Safety is an obvious concern for the company, given the nature of the work they do and the environments in which they operate. Trips and falls, proper operation of gear, and especially weather (fog, wind, rain, snow) are the most common hazards.

Its fallers are trained and certified through the BC Forest Safety Council, but AFO goes beyond the basics. Schmidt says the company has tried to cultivate an overall “mindset of safety” among its team, which is particularly important because there is little or no formalized training programs for some of the work their team is doing.

“There is no course to teach you climbing, for example. You learn it hands on, from people who know how to do it,” says Schmidt. “So we need to train every person we hire.”

Schmidt says all the crews are urged to recognize “condition of upset” in themselves and their fellow crew while they are working, and to call a stop to work when they see it.

“All the documentation and procedures in the world won’t keep people safe if they can’t recognize that condition,” she says. “Maybe it’s a cold, wet day and your feet or hands are numb. Maybe gear is not working properly and you’re frustrated. Maybe there’s a personal upset on your mind. That’s when mistakes happen, so that’s when you need to stop.”

From its initial 10 to 15 staff and subcontractors back in 2005, the company has grown to between 60 and 70 employees and subcontractors. Diversification of both services and clientele has been a big part of that success. So too has its people.

Though there are certainly some speciality services in the mix, Schmidt sees AFO as a one-stop shop – from timber reconnaissance and evaluation, to planning, mapping, falling, climbing, yarding and watering. The partners would like to see the company become a tenure holder in its own right in the future, to own and manage their own fibre. 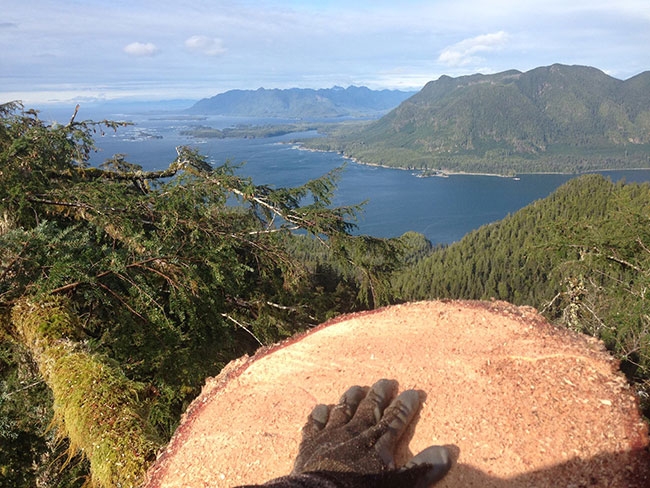