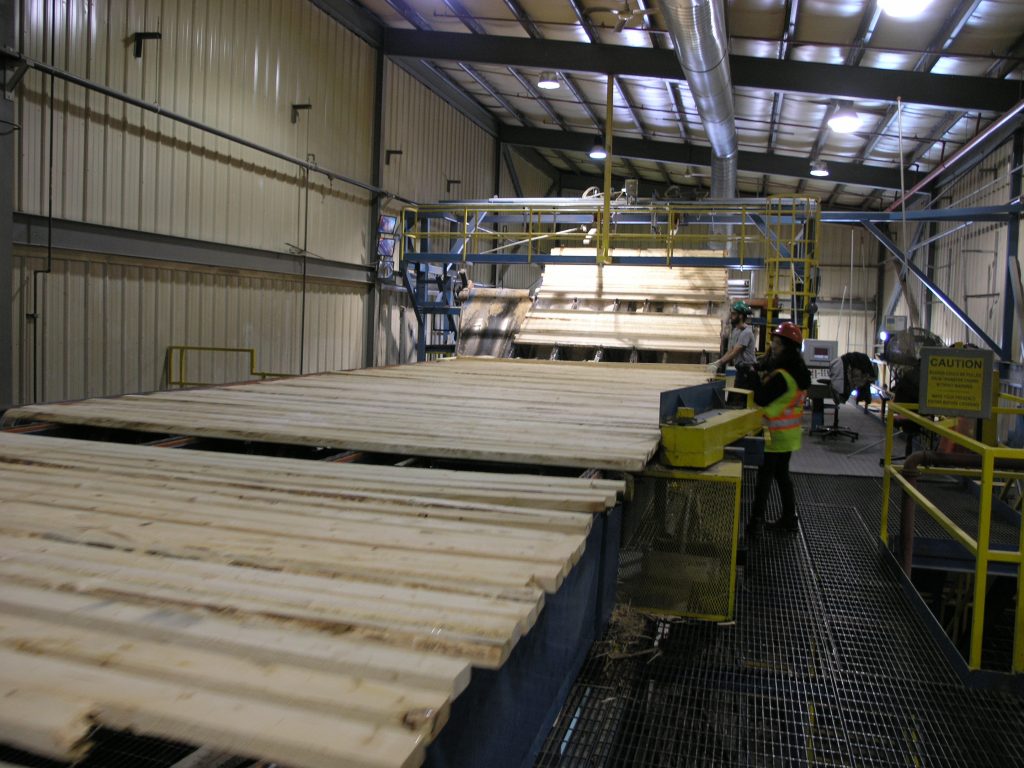 A look inside the planer mill at EACOM's Elk Lake

While $13 million invested in new technology since 2012 has helped bring EACOM’s Elk Lake mill up to respectable efficiency levels, mill manager Mark Everard explains that ongoing work on culture and performance management have been just as important.

“You pour a bunch of money into a mill, that’s the easiest part; it’s only the beginning,” Everard says from outside the mill on a crisp February morning. “The real challenge is getting everybody up to speed on how to get the most out of that equipment, and the most value out of our fibre. And that’s what we’re right in the middle of.”

This push to create a culture of continual improvement may only date back a couple of years, but the equipment upgrades themselves began back in 2012 with the addition of two single-pass sawlines.

“In 2012, the company elected to refit the sawmill canter lines and they bought Comact DDM 12 and DDM 6 lines at an auction and then refurbished them. They also added a new USNR board edger and a new chipper,” Everard explains. “We kept the same debarkers, we’ve got two 18 inch D-Tec Cambio style and a 22-inch, single ring Nicholson A5A, which is adequate.”

Lumber flows from the canters to a Comact trimmer optimizer and trimmer and a 44-bin sling sorter. The final piece is an older Comact single-fork stacker, which Everard says exemplifies what they are trying to accomplish at Elk Lake.

“You might go ‘Gee whiz, that’s an old stacker.’ Then again, if you maintain them, a single-fork stacker should be able to get 12 cycles a minute dependably and smoothly. People will claim you can get more, but day-in day-out, real life, if you’re getting 15 you’re really doing something special. This stacker will be able to keep up to about 56,000 fbm/hour so we are fine for now. It goes back to that continuous improvement mindset we’re trying to build that not only includes the iron but the people and the philosophy. So when we talk about the stacker – we’re not going to ask for a new stacker until we get 100 per cent of what this one is capable of.”

Where it makes sense though, the mill is happy to invest in ongoing training, as is the case with the two Comact DDM lines. A few years back EACOM felt they should be getting more production through those lines, and so in addition to setting clear targets and establishing accountability, they have invested in significant training from the supplier. The difference in production has been significant Everard explains.

“Part of why the DDMs are running so well is because every three months we have a Comact guy come in and he stays for a week, and he goes over it with our operators, with our maintenance group, and with our leadership group again and again and again. We’re now in our second year of this ongoing training. Initial visits precipitated large amounts of work to be done on the canters, now, when Comact concludes a visit they have largely been tuning and training we rarely have issues.”

Overall, through continual tweaking of existing gear, including both operations and maintenance, the sawmill is now producing around 25 per cent more than it did 2.5 years ago. In hard numbers, that means producing about 150 million bdft/year with a wood supply that is 75 per cent 6-in in diameter and below.

That same process has been used to extract significantly more from the mill’s existing dry kilns. While the mill plans to produce 150 million bdft in 2017, a number Everard feels they can exceed depending on log diet, until recently the kilns had been struggling to dry 125 million bdft.

The mill runs an older Hemco (USNR) kiln and two newer Cathilds off a Konus hot oil system that until recently was also used to heat the mill. For starters they added a few hot air furnaces to heat the mill, allowing them to isolate the glycol system for lumber drying alone for a 25 per cent gain in drying energy. Then they looked at each step in the process to maximize efficiency.

“We didn’t spend any capital, but instead put a lot of attention on our kiln schedules, repaired the kilns top to bottom, the baffles etc… We also had to re-tube the Konus system. In the end we’ve been drying at 30 per cent over previous capacity for the past six months, so we are comfortable that can dry our current production now.”

Elk Lake’s sawmill isn’t the only area reaping the benefits of upgrades and performance management. Its planer mill, which burned down in 2005 and was rebuilt the following year, is also a big part. As Everard explains, it’s a well-built line that just required some tweaking.

“As the mill cranked up, it caused the need for the planer to crank up, and the planer is really answering the call well. It’s a standard horseshoe configuration, with mainly Carbotech iron, but I’ve got to hand it to the guy that dreamed this up, he did a nice job – really nice tilt hoist, really good infeed to the pineapples,” Everard says. “We’re going to do some automation in there, but it’s a nice set up. Gilbert planer, which is a really nice planer.

“The back end is basically Carbotech with a PLC lug loader. We did new Autolog controls with the new Pro Grader which helped as Autolog has some good code people. After the lugloader we have a real nice Carbotech, dual-trim saw setup. We’ve got a standard Carbotech fence with the standard trim saw and then a second PET fence with a second PET trim saw,” Everard says.

“The second fence and saw set was never commissioned so we’re in the process of re-commissioning that so we can get that extra value. There’s a fair amount of value extraction capability in this line and we’re going to realize its full potential.”

The most recent upgrade is the replacement of the original Autolog geometric planer optimizer with the supplier’s latest Pro Grader planer optimization scanning system that adds a wide array of visual defect detection. It was only two weeks old when CFI was on site, but Everard said the retrofit was going well.

“We want it all done yesterday,” Everard says, laughing. “In all honesty it’s going well; we’re on schedule with our proforma but it’s got more and we’re going to be several months dialling this thing to get all that it’s got.”

The Pro Grader adds functionalities like knot detection and measurement, slope of grain, stain and rot, but Everard says solving the latter might be easier said than done. “I’m not convinced we’re going to completely solve the rot detection problem. But the slope of grain, knot measurement, and sap stain will be a huge impact on our grade recovery; enormous.”

The new unit is designed to sit in the same footprint as the original Pro Grader, which helped simplify the retrofit, Everard notes. While the mill looked at the full gamut of planer optimizers on the market for the project, they felt the Autolog unit gave the best value for dollar in their application.

The planer team has been through a similar process as that in the sawmill, with similar gains. Everard says productivity is up 25 per cent in that same 2.5 year period, with better grade upturns. The latter is expected to improve further still with the new optimizer installed.

Everard says all the hard work over the past few years is paying off in markedly improved productivity. There is still work to be done, he adds, to turn the mill into an above-average performer. Still, he feels the roughest part is now in the rear-view mirror.

“We’re a work in progress; we’re about halfway to where we want to be, but we’re in the fun part now. The real heavy lifting has been done and now it’s becoming easier and easier. Once you get people aligned with the philosophy, adopt it, adjust to it, and then they start winning – the entire site is running at levels it’s never seen before – everyone starts having fun, and that’s a good place.”