April 1, 2016 - When Heather and Mike Murray purchased GLM Falling in the Port Alice area of Vancouver Island in 2008, the future looked to hold endless opportunities for the company, renamed R&B Falling. 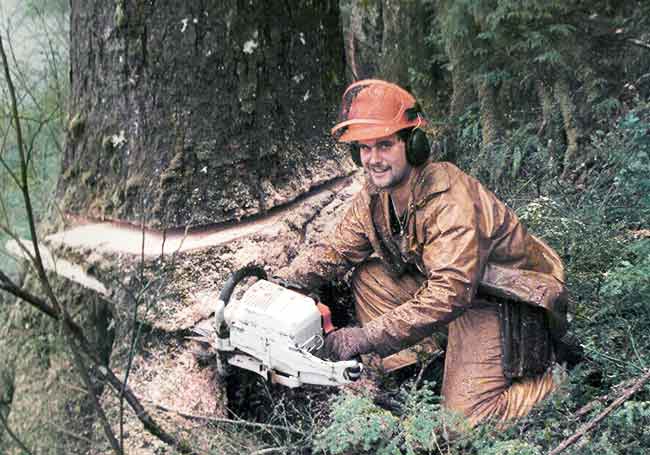 But after tragedy struck the family in 2011 with the passing of Mike from a fatal illness, the company’s future was in jeopardy. Being a hand faller for 28 years, Mike was the heart and soul of the operation out in the bush. With the combination of dealing with the devastating loss of her husband, and figuring out how to keep the business running for herself and the company’s employees, to say Heather’s plate was full would have been beyond an understatement.

“Needless to say, it was a huge learning curve,” Heather says, taking the time to chat about her operation during the Truck Loggers Association’s annual conference held in Vancouver this past January.

But fortunately for her and R&B Falling, the Murray family came together and persevered. Thanks to the hard work of herself, her 25-year-old stepson Bruce, who works as a hand faller and processor operator for the company, and her 28-year-old, business-savvy stepson Russell, the three Murray family members have been able to keep R&B Falling harvesting logs on the north end of Vancouver Island and sustain employment for eight to 12 people in the Port Alice area, where good jobs are in short supply.

Investing in efficiencies
The logging operation runs 11 months of the year, harvesting between 200,000 and 240,000 cubic metres of logs for Western Forest Products.

Of course, R&B Falling didn’t have this capacity until January 2015 when it decided to invest in a John Deere 3754D equipped with a brand new Waratah 625.

“There are still lots of challenges with the way things are and we’re always trying to get more efficient,” Russell says. “Things have really tightened up as far as work goes. We were fortunate enough to be in a spot to purchase this new machine. It’s a big step for us. We’ve had it for about a year now… it’s definitely a game changer, a lot more functionality than what we had in the past.”

When R&B Falling first decided to invest in a second machine, it was decided that the company needed something larger than its previous model.

“When we were first talking to John Deere about it we had the Waratah 624 head on it and wanted something bigger,” Russell explains. “With the Waratah 625 you get the best of both worlds where it can handle a larger log, but it’s quicker than the 626. We’re dealing with a lot of variations so having that extra speed helps. When we’re going to a setting with larger wood, it has the ability to handle it. Every time I see it and how quickly it can chew through wood, it’s quite impressive.”

R&B Falling harvests and sorts a variety of species in the northern part of Vancouver Island, including cedar, balsam, spruce and yellow cedar. The harvesting operations typically involve somewhere between four and six sorts.

The new equipment has quickly yielded a big uptick in production, allowing the company to harvest upwards of 140,000 cubic metres with the combination of the new harvesting gear and its older 330C Hitachi equipped with a Waratah 624 harvesting head to complement the 80,000 to 100,000 cubic metres harvested annually through the company’s hand falling operations.

Thanks to the investment in the John Deere 3754D and Waratah 625, the company’s overall production has doubled, according to Heather.

Forestry in the blood
According to Russell, Bruce always wanted to be a hand faller and follow in his father’s footsteps. He says it’s a no-brainer that their main influence for getting into industry was their father.

“Bruce wanted to be a faller since he was four or five years old,” Russell says. “Back even in the late ’90s, everybody was saying to him that there won’t be any logging jobs, you have to think of something else. He said ‘Nope, I’m going to be a faller, just like my dad.’ It’s definitely been tough on him having to deal with everything that’s gone on and to continue our dad’s legacy. He’s had to do a lot of maturing very quickly, but he loves it. He’s happy and really enjoys being out there – laying down a big tree, looking at a setting, looking at how much work he’s done in a day.”

For Russell, being involved in the forestry sector was always a possibility; he just didn’t see himself working in the bush like his brother, although he did try his hand at being a chokerman for a summer.

“I was actually going to be a corporate lawyer at one point,” Russell says, who now works as an accountant for R&B Falling, running various aspects of the business side of the operation with Heather. “I took a couple of law classes and they were alright, but I was more of a numbers guy… but I always wanted to be involved in some kind of forestry or heavy industry.”

After school, Russell returned home to the Port Alice area to work for a local mill that has been shutdown for sometime now. When his father became ill and passed, there was a lot of turmoil within R&B Falling that had to be overcome.

“There was a lot of learning we had to do on the spot between contract negotiations and running the business,” Russell says. “Thankfully, my brother had been in the industry for a little while and we relied on family friends and other industry members.”

Heather says that the local logging community has been tremendously supportive to her, her stepsons and the company.

“The people in the industry have been really good to us,” Russell adds. “The TLA, other loggers… it’s taken a lot of people to help us get to where we are.”

Overall, the company is in healthy shape these days and continues to provide much-needed jobs to people in the Port Alice area. And although he “doesn’t have a crystal ball,” Russell sees a bright future for his family’s business.

“It’s not the way we would have wanted it to go down, but I think my dad would be proud of how much we’ve accomplished and where we’ve come in the last five years,” he says.