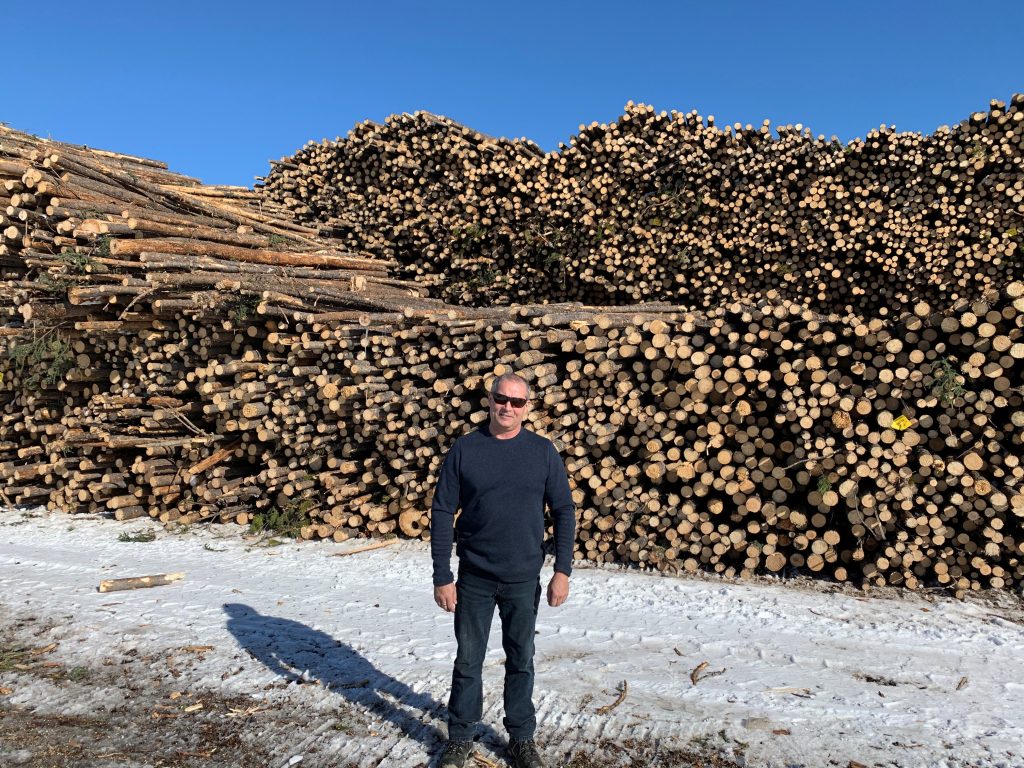 Close to $615,000 in funding awarded to East Fraser Fiber Co. Ltd. (EFF) by the Forest Enhancement Society of BC (FESBC) is helping to support jobs in Mackenzie, B.C., and in the recovery of close to 30,000 cubic metres of low- quality fibre that otherwise would not have been used. Extracting as much useable fibre from a block, and not burning it at roadside, allows for significant greenhouse gas emissions to be avoided, contributing to meeting British Columbia’s and Canada’s climate change targets.

“Increased utilization is good for the environment and the economy,” said Jo-Anne Lang, RPF, EFF forester. “To be able to do this successfully in remaining mountain pine beetle-killed and significantly deteriorated stands, support such as that provided by FESBC is necessary.”

EFF mill owners Pat and Richard Glazier have always believed that the full utilization of sawlogs and residual material is the right thing to do, which is why 30 years ago the company built a whole log chip plant equipped with the first drum debarker in B.C. This allowed for efficient debarking of small-diameter logs and debris that would otherwise have been left at roadside to be piled and burnt.

Although it has not always been profitable, EFF has continued to hold on to their vision of enhanced utilization of fibre because they strongly believed in the long-term benefits this approach would bring to revitalizing forests for future generations. “We worked together to make it work,” said Pat.

One of the ways EFF has been working together with partners was through a log purchase agreement with Three Feathers Limited Partnership, a consortium of the Kwadacha First Nation, Tsay Keh Dene First Nation, and the McLeod Lake Indian Band. Three Feathers holds a Non-Replaceable Forest Licence with requirements to harvest significantly damaged leading pine stands of which EFF is currently harvesting and managing volume under this agreement.

“We’re still harvesting mountain pine beetle-impacted stands, which are well past their prime,” said Lang. “Harvesting is more costly, and blocks are further and further away from the mill. FESBC funding made it possible to substantially increase the utilization of residual fibre from damaged and low value stands that our company may otherwise have had to leave or burn at roadside because of the costs to transport it. Being able to harvest and deliver the fibre to those who can utilize it will benefit the community, contractors, employees, and the environment.”

Also, EFF now has a business relationship with Sasuchan Development Corporation (SDC) to do similar work.

“Similar to Three Feathers, SDC holds a non-replaceable forest licences (NRFL) with conditions to harvest significantly damaged leading pine stands,” said Lang. “EFF is currently managing and harvesting a portion of this volume under our agreement with SDC, and some of pulp will be extracted from the SDC NRFL utilizing the FESBC funds.”

In providing the grant to EFF through its seventh intake, FESBC recognized the proposal’s many benefits.

“A project like this generates so many benefits,” said Steve Kozuki, executive director of FESBC. “Healthy forests for future generations of British Columbians, improved wildlife habitat, better water quality, reduced greenhouse gases, reduced wildfire risk, jobs in the Port of Vancouver and beyond, and the enhanced utilization of pulp products which can displace fossil fuels such as plastic straws. Hard-working people in the Mackenzie area are doing their part to make life better for all of us.”

Robert MacCarthy, EFF’s regional manager commented on the good work: “On any given block, we can extract up to 50 per cent additional volume in the form of pulp logs. There is immense overall benefit to the public in making sure the fibre is brought in and utilized.”

“Mackenzie exists to support the forest industry, that’s why the town is here. It’s nice to see a local business like East Fraser Fiber so focused on community and supporting their employees. And kudos to FESBC for raising the bar in terms of forest management and practices. I think companies should be looking at what FESBC is trying to achieve to support sustainable forest management practices especially with so much of our forests having been lost to fire and insects.”

This project is funded in part by the Government of Canada.