October 21, 2015 - Driving down a bruised and battered logging road shortly after spring weight restrictions had been lifted in Nova Scotia, a peculiar site of stacked logs emerges around the bend. Massive piles of separated logs, each with a different size, shape, species or quality form a long row down the winding road. 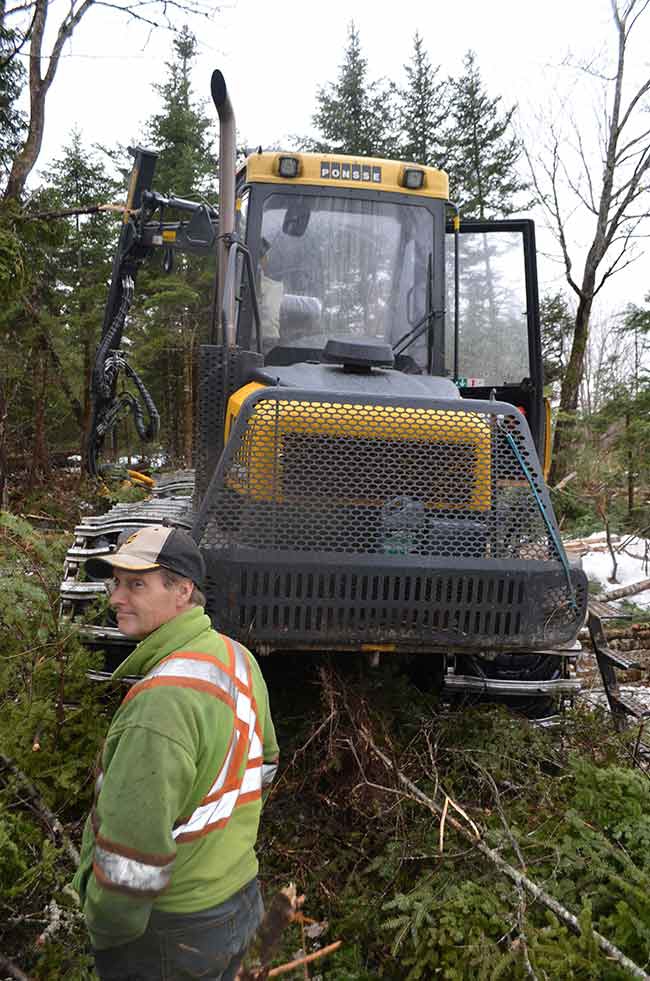 Milltown Forestry Services contractor Charlie Baird uses a Ponsse BuffaloDual to maximize his production. Driving down a bruised and battered logging road shortly after spring weight restrictions had been lifted in Nova Scotia

The nine stacks, the results of a selective cutting in the forests east of Stewiacke (65 kilometres north of Halifax), represent the different customers that each of the stacks is provided for. The logging trucks for each customer are then able to pull up along the side of the road, load the contents of a stack into the logging truck, and make the journey back to the mill. The lineup on the road includes stacks of hardwood and softwood for area sawmills supplying the Canadian and American lumber markets, as well as biomass operations like the nearby Scotia Atlantic Biomass Plant in Middle Musquodoboit.

Despite several sawmill closures in Nova Scotia over the past five years, there are still several outlets available nearby for quality sawlogs. Within an hour of the Stewiacke region, mills that survived the recent recession are ramping back up towards previous production levels, demanding quality 8 ft. and 10 ft. softwood and hardwood logs for lumber production for the housing market in the eastern United States, as well as domestic needs.

For many of the Nova Scotia biomass plants, including the Scotia Atlantic pellet plant and Nova Scotia Power in Port Hawkesbury, the common form of biomass being supplied is cut-to-length wood from the forest, which is then chipped and stored on site. Both operations then use portable chippers or grinders on site to reduce the logs to the sizing needed for pellet production and power production.

In the woods
During my visit to the woods, I caught up with Charlie Baird, a local contractor for Milltown Forestry Services who, along with his team, was working on a tract of land in need of selective cutting. Despite being well into the spring months in Nova Scotia, the snow in the forest was still knee-high in some spots, the harsh reminder of one of the worst winters on record in the province. One that forced Baird and his team to spend most of the winter digging the harvester into the snow and cutting blind, based on constant variations in the deep snow.

The area in question had been hit hard by Hurricane Juan, which ran ashore in Nova Scotia as a Class 2 hurricane in late September of 2003. Since then, forests like this one have needed thinning to remove the dead wood destroyed by the hurricane.

Baird talked about the forest in question, which was riddled with dead fir and biomass wood. The team was removing those stems from the property, along with other trees as part of the selective cut, primarily leaving the hardwood to continue to grow.

Selective thinning takes efficient equipment, which is exactly the reason why Baird invested in a Ponsse BuffaloDual when he needed to purchase a new harvester recently. His previous harvester, an old TimberPro, is nearing the end of its run. And with forest products markets re-establishing themselves, Baird was prepared to make the tough choice to make the investment in a new machine.

Supplied by ALPA Equipment, the BuffaloDual is a harwarder, a unique combination of harvester and forwarder in a single unit. The harvester converts to a forwarder by putting a rack on the back of the machine, which allows guys like Baird to cut the wood and move the stack to the roadside without needing a second machine.

That flexibility helps Baird and his team build the separate stacks on the roadside as harvesting continues in the forest, which builds in another layer of efficiency when removing stems for so many different end users. For an operation that cuts close to an equal supply of stud, pulp and biomass logs in the forest in its thinning operations, those efficiencies have a significant impact on the bottom line.

And the bottom line is difficult in thinning operations, especially ones that include the lower value pulp and biomass logs.

In Nova Scotia, stud logs are sold to the mill for as much as three times more than the stems being sent to biomass operations. When asked, Baird called the pricing “bearable” considering the cost of doing business. But the price being paid for fibre didn’t seem to be the biggest issue hampering Baird’s work.

Those restrictions are put into place in early-to-mid March, and run for eight-week periods that can end in the latter part of May in some cases. The roads in Nova Scotia are not built to handle the load of filled logging trucks during the spring thaw, when roads are filled with so much moisture that they take on material properties that more resemble sponges than roadways.

It is those same weight restrictions that make Baird’s most recent purchase that much more difficult for his small operation.

“Banks make equipment payments mandatory 12 months of the year,” Baird says. “They used to give skip payments for the shutdown months (due to the weight restrictions).”

But as the winters get harsher, the margins get thinner, and the cuts more selective, harvesters like Baird will continue to fight the elements, and the regulations, to try to make sure the fibre from the forest hits the road and gets to the right customers.