May 16, 2017 - In the Nordic countries it is taken for granted to use the CTL method when felling trees. In other parts of the world tree-length logging is equally self-evident. Many times, though, a combined approach is what’s needed.

The Germany company HSM has recognised this and is exhibiting a combined forwarder and skidder at Elmia Wood.

HSM stands for Hohenloher Spezial-Maschinenbau GmbH. The company has been manufacturing forestry machines for 50 years. Its last appearance in Sweden was at Elmia Wood in 2013, when it exhibited harvesters and forwarders for the cut-to-length method.

“In German forestry we do both CTL and tree-length logging, partly because industry needs vary and partly because we fell more large-stemmed deciduous trees,” explains Patrick Preusch of HSM.

The combination forwarder comes in three basic types: HSM 208, 805 and 904. Each comes in various versions, including with four or six wheels. In all the versions the bunk space can be quickly adapted to turn the forwarder into a skidder. The crane also has a quick-release attachment so the operator can switch between a grapple and a harvester head. In other words, it is three machines in one.

Two different winches
The machines also come with two types of winches for front or rear mounting, with a tractive force of 7 or 15 tonnes. The winches are designed for felling on steep slopes, where the logs must be winched out before a forwarder or skidder can take them out to the road.

One unique design solution is that the width of the wheel axles is less than on equivalent machines. The advantage is that this allows space for 900 mm wide tires without exceeding the maximum permitted width of the machine for driving on public roads, which is three metres.

The combined skidder-forwarder may be a foreign machine in Nordic forestry but in countries like Germany it offers the forest contractor both flexibility and more possible jobs. 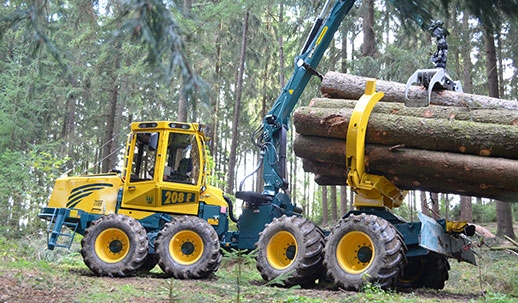