May 24, 2013 – Progress in technology and machinery has increased the efficiency of felling operations, but replanting is still a manual, time-consuming process, but not for much longer according to a new project.

The use of modern digital technology and drones for aerial photography can lead to major gains, says Hans Thunander. He has developed a new tree-planting concept that envisions a 50 per cent increase in efficiency within ten years.

“I’ve spent my whole life in silviculture and these ideas have been germinating for a decade,” he says. “But now I feel the technology is far enough advanced that it can be used to make replanting more efficient.”

His method can be likened to a two-stage rocket: Vision 2015 and Vision 2023. The first stage, Vision 2015, involves combining GPS technology with a remote-operated flying drone, which photographs a new clear-cut area. The image is then interpreted on a computer – making it possible to plan the replanting process in detail – to decide exactly how many plants can be planted, how densely, and precisely where.

“Too many plants are used unnecessarily today because they are not optimally planted according to the soil fertility and type of terrain,” Thunander says. “It’s also hard to know now precisely how densely you’re planting when you just look around as you go. GPS gives you better control.”

Another important aspect of the technology involved in Vision 2015 is scarification, which he says can also be made far more efficient. Instead of the current procedure of carving out two parallel rows on the clear-cut area, the scarifier can be equipped with the same kind of autopilot as used in agriculture and be driven in a new driving pattern designed by Thunander.

If the scarifier drives along every second strip on its outward journey with precise control of the centre-to-centre distance between the plants and then takes the omitted strips on its return journey, the optimal strip density is achieved. Backing on the turn strip is also unnecessary and the total operating time is significantly reduced.

“Autopilots have existed in the agricultural industry for a number of years and are cheaper now,” Thunander says. “The precision along the forest edge has not been ideal but that’s no longer a problem. A detailed image of the clear-cut area makes it easy to design such a driving pattern.”

He will demonstrate the whole process step by step at Elmia Wood, right up to the final stage when the planters take over the GPS track and can start to input each individual plant, so that the exact number of plants per site can be planted and verified.

By itself, Thunander says that Vision 2015 can make replanting about 25 per cent more efficient. Time and technology will then quickly work towards the next stage, Vision 2023. By then it will be possible to have 3D photos from the drone. The images will be transmitted immediately when the drone lands and much of their interpretation will already have been done automatically so the scarification and planting can begin directly.

“There’s already a multitude of drones, the software is easy to use and the whole field is developing incredibly fast,” Thunander says. “Fully automatic image processing will lead to major benefits.”

Not to mention fully automatic planting, which is the most innovative aspect of Vision 2023.

This involves a remote-controlled machine, which Thunander is working fulltime to develop now. The machine is not yet ready to be presented. All he can say today is that first “molehills” of loose soil are “screwed up” using a minimum of energy and then prepared for a planting tool. The tool then makes a hole in the heap and inserts a plant. A small amount of wet, fertilized planting soil is then automatically dropped along with the tree plant into its hole. He calculates that this method can make tree planting a full 50 per cent more efficient.

“These screwed-up molehills and the planting soil are decisive factors in my concept,” he says. “Much of the benefit depends on knowing that the plant will survive.” 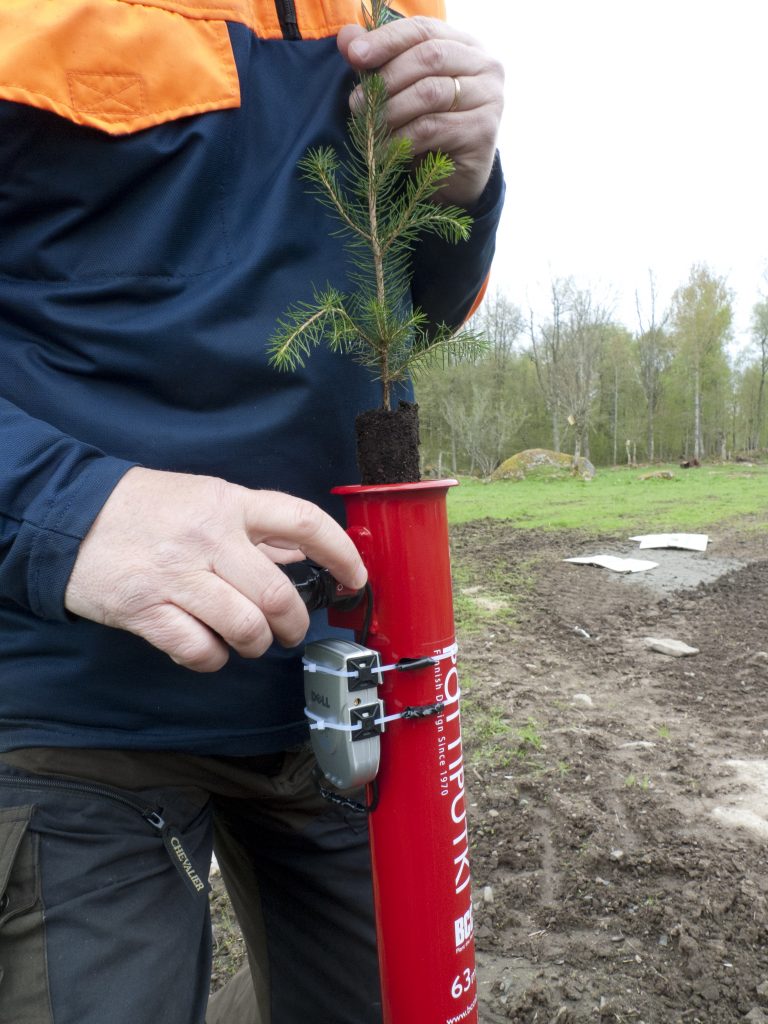 Hans Thunander will demonstrate the whole process of Vision 2015 step by step at Elmia Wood The use of modern digital technology and drones for aerial photography can lead to major gains in tree planting.
Print this page