Now that market conditions are improving, many sawmills across the country are taking advantage of the opportunity to reduce costs and optimize production. It’s all about getting more out of every tree that makes it to the yard.

Canfor’s capital investments
In an effort to make more of its sawmills efficient, Canfor Corporation will proceed with capital investments totalling approximately $36 million to improve efficiency and recovery in its Houston, B.C., sawmill. It will also be investing $15 million to modernize the facility in Grande Prairie, Alta.

Like the upgrades done to the Elko sawmill, the investments will include upgrades to primary and secondary breakdown lines and advancements in scanning and optimization technology.

“Our newly strengthened fibre position in the Houston region allows us to proceed with this significant investment,” said Canfor Corporation President and CEO Don Kayne in a press release. “These capital improvements are designed to ensure we are able to operate a world-class facility in Houston for the long term, in all market conditions.”

At press time the company also announced further investments in its recently upgraded sawmill in Elko, BC (see report on page 36). According to a report in The Free Press, Canfor is investing $10 million in renewable energy. The mill will install a wood biomass-fired energy system to improve efficiency, a move also driven by a solid log supply.

“This capital project will improve cost and environmental efficiency at our Elko mill by utilizing sawmill residuals as an energy source in place of natural gas,” Kayne told the local paper. “Our fibre position in the Kootenays is strong, and this investment reflects our continued commitment to operating world-class facilities and making the most of our high-quality fibre in this region.”

These investments come on the heels of an announcement of a 50/50 joint venture with Tangshan Caofeidian Wood Industry Co. Ltd of China (TCW) to review the potential construction of a secondary manufacturing facility to be located at the deep water Caofeidian Port Tangshan City, Hebei Province, China.  The parties will develop a business plan over the next several months to determine the capital necessary to construct the plant.  Canfor will enter into a supply agreement with the joint venture.

“This is a strategic partnership that demonstrates our ongoing commitment to the Chinese market for lumber,” Kayne explained when the announcement was made late last Novembeer.  “Building a secondary manufacturing facility at the Caofeidian Port will allow us to work closely with customers to grow the market and expand the range of applications for Canfor products in China.”

Since 2010, the company has invested more than $650 million in modernizing its British Columbia lumber, pulp and paper mills.

“The expansion project involves the construction of a new wood scanning and optimizing plant, and the purchase of specialized wood scanning technology as well as trimming equipment to improve production efficiency,” said the Operations Manager.

The move will increase wood recovery and productivity and make the company more competitive in its export markets. The remanufacturer primarily uses rough shorts from local sawmills and specializes in pressure treating.

Tolko reopens OSB Athabaska ahead fo schedule
OSB Athabasca in Slave Lake is back to producing boards after being shuttered four years. The oriented strand board (OSB) and engineered wood products mill was originally closed in February of 2009 following the downturn in the North American housing market caused a significant drop in customer demand.

In February of 2013, Tolko announced it would reopen the mill and make significant investment in order to create a more efficient and productive mill. At the time of the announcement, Brad Thorlakson, president and CEO of Tolko Industries Ltd. stated: “Before we could commit to the significant financial and human resource investment required to restart the mill, we had to determine, to the greatest degree possible, that current improvements in market conditions are sustainable. We are confident about the future of the industry and look forward to positive years ahead. Reopening Athabasca confirms our commitment to meeting the needs of our customers through innovation and product development.”

Just 10 months later, a revamped and revitalized OSB Athabasca produced its first board since the 2009 shutdown.

There have been major upgrades made to the facility since it last produced boards back in 2009. The in-feed system has been completely redesigned in order to produce a more efficient system for getting logs into the debarkers. That system involves the use of a fixed Tanguay PL350 rail-mounted stationary loader used to feed the debarking system. They have also added a system that allows the mill to produce OSB boards for roof sheathing, opening up a new market not available previously.

OSB Athabasca also possesses the longest press in an OSB mill in North America. Siempelkamp, a German company that specializes in customized production machinery, constructed the 72-metre long press system. The system was very well maintained during the four-year shutdown, which has allowed the facility to continue producing high performance OSB and laminated strand lumber.

With the additions made to the plant, which make possible a new range of diversified products, OSB Athabasca has a stronger position in the industry.

Sawmills in N.S. are short on logs
Mills in Nova Scotia, however, have found themselves in a log shortage since the Nova Scotia government acquired former Bowater lands late in 2012. Public consultations have been held to find out what people wanted to see done with the land. A conceptual land management plan for the western region is expected in early 2014.

Meanwhile, Lewis Mouldings and Wood Specialities Ltd. in Weymouth is running low on logs and another sawmill, AFT Sawmill, that typically depends on Bowater logs is due to reopen. The Lewis mill is purchasing logs from private woodlots and, according to the Chronicle Herald, it is currently down to 15 per cent of its typical inventory. If trucks don’t start bringing logs soon, the spring thaw will cause road closures for heavy logging trucks.

Look for a full article on the upgrades made to the OSB Athabasca mill in the Canadian Wood Products section of the March/April 2014 issue of Canadian Forest Industries. 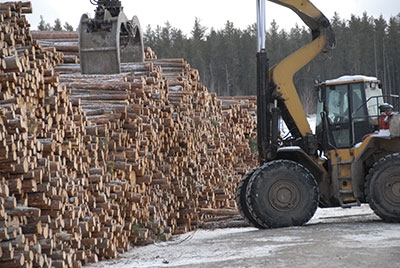 Sawmills across Canada are proceeding with strategical investments to increase their profitability. Now that market conditions are improving
Print this page