Aug. 15, 2018 - Touring Nechako Lumber is an all day affair. The 8.9 million square-foot site in Vanderhoof, B.C., is home to a small-log sawmill, planer mill, pellet plant and energy system, all of which are seamlessly integrated to handle 100 per cent of the roughly 900,000 tonnes (800 cubic metres) of logs that enter Nechako’s gates each year. 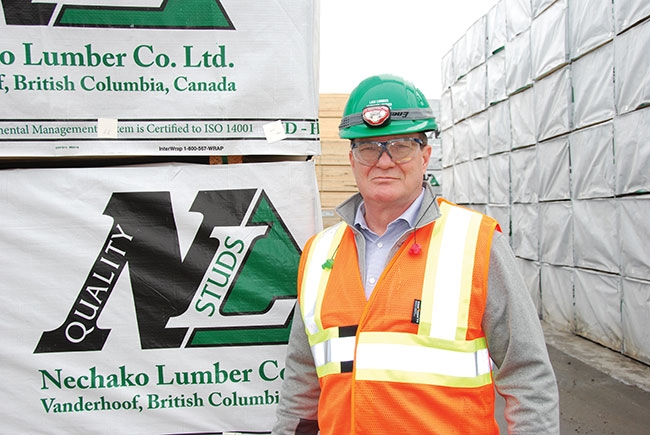 Long stretches of pneumatic conveyors connect each of the facilities and are continually transporting sawdust, shavings or hog to its respective end use. The sawmill pumps out about 245 mmbf a year, while the pellet mill produces about 165,000 tonnes, and the energy system consumes 56,000 dry tonnes of hog annually.

Long gone are the beehive burners to cheaply dispose of waste residuals. Site manager Dave Herzig says their focus is finding the best ways to drive value from all fibre. “The business has been a part of the community going back to the late 1960s, and it’s evolved over time to the point where it’s an integrated site that utilizes whole logs internally,” Herzig says.

Nechako Lumber was originally built in 1969 as a planer mill. The sawmill, L&M Lumber, was constructed on the same site in 1972. They operated as separate companies until last year when Sinclar Group Forest Products out of Prince George, B.C., purchased all companies on site and merged the sawmill and planer mill under the banner of Nechako Lumber.

Today the site employs 85 people at the sawmill, 60 at the planer, 20 at pellet plant, and four at the energy system, and has an office staff of about seven. The sawmill and planer run two shifts Monday to Friday, while the pellet plant and energy system run around the clock seven days a week.

Nechako is tooled for small to medium logs, running mostly pine and some spruce, with the average log size around 6.8 inches.

“The concept of the sawmill when it was built was to take care of what they called the opportunity wood, which was the smaller profile spruce and pine; what was basically deemed unusable in larger mills,” explains Tammy Scott, controller and 27-year Nechako employee.

Today the sawmill consists of three primary breakdown lines processing eight-foot blocks, averaging all together 3,300 blocks an hour. A HewSaw 200 runs logs under six inches and two Comact OLI lines run either six- to eight-inch logs or logs with a diameter greater than eight inches. The latter was installed in 2013 to increase their production flexibility. (Read about that installation here.)

Two infeed decks, one for small and one for large logs, are loaded via Caterpillar 569 cranes because of the high volume. “The logs are so small that we’ll cycle five or six in a conveyor at a time, run them up against the dead head and cut them into eight-foot lengths. It’s just a single cut off saw that feeds into a bin and then into the two Nicholson debarkers,” Herzig says.

Finding the right balance of large and small logs is essential to run the mill efficiently. Running too much of one or the other will either flood or starve the secondary breakdown areas, Herzig explains.

Post debarker the blocks are sorted into five bins, which feed into one of the three breakdown lines. Both OLI’s have edgers, as well as Comact scanning and optimization systems with split detection.

The boards are then sorted and stacked via two USNR stackers and sent to one of four COE (now owned by USNR) kilns, each with a 250,000 bdf capacity.

At the planer mill a Gilbert high speed pull through planer runs on average 3,000 lineal metres a minute with 2×4 and 2×6. Boards are sent to one of three lines, each with a Comact GradExpert, and then sorted in bins before the Comact stacker and then the paint line and Signode strapper.

This year Nechako is planning to upgrade all three Comact GradExperts in the planner mill, a $1-million capital investment for the company. “The goal is to extract better grade value out of our fibre, further ensuring we’re getting the right products to the right customers. We have one of the original Comact graders in the mill so we’re due for an upgrade. We have partnered with Comact as our teams are familiar with the technology; with the recent upgrades to the camera’s, camera housings and software technology we are confident we will see a step change in grade recovery,” Herzig says.

The mill is also scoping out a new dust collection system to reduce its reliance on administrative controls. “That will be a future investment and a significant one,” Herzig says. “Right now we have a really good regime around clean up and monitoring, however there is technology that will help us do an even better job of providing a safe and healthy work environment for our employees. We are currently in the planning and scoping phase around identifying what equipment we need to manage dust.”

The mill produces 2×3, 2×4 and 2×6 studs, as well as 1×3 and 1×4 board stock, which are shipped to both domestic and international markets. A railway line runs behind the site and is loaded with both lumber and bulk wood pellets.

Value added
The original energy system at Nechako, built in 1999, was a thermal oil/wood residue boiler that replaced a beehive burner. “The original boiler was a big initiative to start using all the residuals from the bush on this site so we were leaving a better environmental footprint,” Scott says.

In 2011 Nechako Green Energy was brought online, the first system of its kind built by Turboden at a forest products facility in North America. Hog from the mill is burned in a (GTS) boiler, which is attached to an ORC or organic rankine cycle turbogenerator that uses heated thermal oil to produce electricity. The 2.2 megawatt hour produced by the ORC offsets the site’s power requirements. Heat produced by the boiler is also used in the kilns and to heat the planer mill in the winter.

The boiler functions at peak efficiently when it’s fuelled by bark. The addition of white wood affects the burn quality and reduces the heat capacity. The Sinclar Group, including Nechako, is partnering with FPInnovations to study ways to optimize the sawmills’ debarkers, one benefit of which will be less white wood sent to the boiler.

“We want to adjust our debarkers in real time,” Herzig says. “What happens right now is that the debarker is set up to take a log 10 inches and less, using the same pressure. The system can’t differentiate between a green log and a dry log. So if you set it up to deal with a green log it has to have more pressure to take the bark off, but then if you follow that up with a dry log that same pressure digs in and tears out wood fibre, which reduces your recovery and results in too much white wood in the hog fuel .”

If the debarker is set up for dry wood, it leaves too much bark on the green logs, which affects the scanners and reduces the mill’s chip quality. The FPInnovations project is looking to find a way, either through weight or moisture detection, to signal to the debarker to adjust pressure according to log quality, Herzig says.

Rounding out the value-added streams, Nechako’s on-site pellet plant, Premium Pellet, is a well-known name in the Canadian pellet industry. Operating since 2001, the plant consumes about 185,000 oven-dried tonnes of sawdust and shavings from the sawmill and planer mill. Read more about the pellet mill in the Canadian Biomass July/August issue, or at www.canadianbiomassmagazine.ca.

Partnerships
Combined with its production flexibility and value-added products, Nechako’s strength is in its partnerships, whether it’s with the community, other producers, long standing customers or First Nations in the area. Much of the mill’s volume is purchased from upwards of 60 private contracts.

“This is something Sinclar has put a lot of effort into. Whether it’s partnership around fibre or around key customers, our goal is to continue those solid relationships,” Herzig says.

Under its new ownership group, Nechako is in a transition phase. “As part of a larger organisation we have an opportunity to ask ourselves, ‘what is that way forward and what does the future look like?’” Herzig says.

What’s not going to change is the mill’s importance to the Vanderhoof community, both as an employer and as an economic driver.

“We are just a bigger family now,” Scott says. “We have more people, more resources, more expertise brought to the table. We’re keeping the mill’s community culture as it has been, but working under the same Sinclar umbrella with the same end goal.”

Watch a video tour of the Nechako site at www.woodbusiness.ca/tag/video.