March 23, 2018 - Like many successful loggers, Liz Bernier and Joel St. Onge had the operations side of their business nailed down. They had the growth curve to prove it. Yet as they grew, they outgrew some of their business practices. That’s where the Business Skills program from FPInnovations entered the picture. 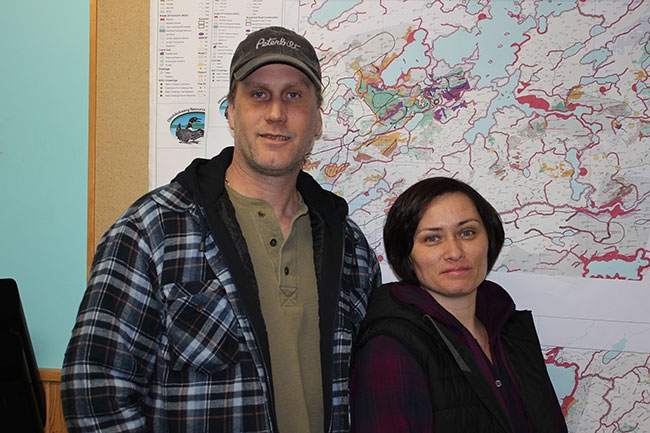 The couple’s logging success has not always been a given. They have dealt with more than their fair share of struggle in life. Back in 2001, the husband and wife team had a vision. They had been working behind a large forestry contractor and they wanted to become an independent contractor. In May 2001, St. Onge Logging became a reality.

The small, family-run business based in Sioux Lookout in northwestern Ontario was a successful 12 to 15-person operation from 2001-2006. Then, the forestry recession hit and employee numbers dropped below 10 people. Still, Bernier and St. Onge were determined to make it work. But the economic blow was paired with a personal tragedy. The couple’s three-year-old son Raymond was diagnosed with a brainstem glioma, and in March of 2006 he passed away.

“We were struggling with our son being sick, and at the same time with the recession hitting, just trying to get through it — survive through it, is what I should say,” Bernier explains.

In 2011, St. Onge Logging grew to a 25-person operation and hasn’t stopped growing. Today, it is comprised of 53 employees and nine broker contractors. Bernier says the decision to pursue chipping, road building, and hauling helped greatly in getting back on their feet after the recession. St. Onge now chips 75 to 80 per cent of its harvest and also produces cut-to-length stems, mostly poplar.

Pushing success
Through this successful expansion, Bernier and St. Onge’s management approach hadn’t adapted much from the early days.

“They were trying to operate as a small four or five-person family business, yet they have 60 plus employees [including brokers]; way too much going on,” Peter Hamilton, FPInnovations’ senior researcher says. “Joel was trying to be in the seat, he was trying to manage the operation in the field… If somebody wasn’t there, he was filling in and trying to run the management side of the business. He’s an awesome logger and an excellent operator and Liz is great in the office, but they were just stretched so thin.”

It’s a common scene across Canada, and the reason why FPInnovations runs the Business Skills Workshop, initially put together in 2013 as a one-day interactive workshop for small groups of contractors. The main objective of the workshop is for individual contractors to benefit from business training tools, to grow their own operations.

“All of the people that I’ve dealt with, they’re great loggers, but where they’re lacking is in the business management side of things,” Dean Caron, FPInnovations’ industry advisor explains. “There are exceptions, but generally speaking, there’s opportunity for things around communication, action-planning, goal-setting and continual improvement elements… That’s where I believe we can help them.”

Hamilton does the national co-ordination and delivery of the workshop and diagnostic program across Canada, while Caron is the go-to contact in Ontario and rapidly moving towards taking over the delivery in the province. FPInnovations members are also invited to join and, if they so choose, may recommend (and sponsor) a contractor they work with to take part.

St. Onge Logging works primarily with Domtar, Weyerhaeuser and EACOM, but Domtar is its biggest customer. Between 300,000 and 350,000 metres produced for chips a year are sent to Domtar, which is also one of FPInnovations’ 210 members Canada-wide.

Seeing the potential for even greater business, Domtar approached St. Onge Logging about participating in the FPInnovations workshop. The workshop is only the first step to FPInnovations’ improvement plan. If a recommended contractor agrees, FPInnovations will also conduct a diagnostic of that contractor’s operation as part of its Business Coaching Program.

“What’s really important about the diagnostic is it’s only for folks who believe they can be better or continually improve,” Caron says. “We’re there to point out what they’re doing well and should continue to do, and then we identify areas where there’s opportunity for improvement and help them action-plan that so they can be a world-class performer.”

Hamilton has completed about 40 diagnostics across Canada to date, while Caron has worked on the last six Ontario projects, with St. Onge being the latest.

Trust based
Bernier and St. Onge took Domtar up on its offer to sponsor the entire experience, and also agreed to let Domtar sit in on the post-diagnostic meeting to review their operation.

“Domtar was very well aware they may not be invited to the table because when we sit down and look at the contractor’s operation, we can get into some fairly pointed questions,” Hamilton explains. “We don’t pull any punches, we lay the cards right out on the table and they look at the good, the bad, and the ugly.

“It’s always up to the contractor to go and invite the company. That said, I have yet to experience a contractor that does not want a company at the presentation,” he says.

Bernier attended an FPInnovations workshop in Dryden, Ont., in 2015 where both Hamilton and Caron remember her being an enthusiastic participant.

“I do probably 20 workshops a year,” Hamilton says. “I remember the one with Liz in it because of the room. And I think I remember some of her questions because, quite frankly, she had a lot. She was a big participant in the workshop.”

Despite battling breast cancer in the interim from diagnosis in April 2016 to remission in May 2017, Bernier’s enthusiasm hasn’t worn off.

“It has been nothing but positive,” Bernier says. “We didn’t have these tools at our fingertips to use, we didn’t have all of the programs that we could be utilizing to their full extent to actually get numbers to go back to the mills with, and make us more competitive in pricing.

“They’ve completely helped me from the health and safety side right down to the cost effectiveness, and it goes hand-in-hand. If you improve your health and safety, then nine times out of 10, your cost actually drives that and then you see an overall savings at the end of the day,” Bernier says.

The respect between partners is mutual. “They’re terrific people, they’ve kept their core values that have made them successful, like treating people right, being a good community-minded employer,” Caron says about Bernier and St. Onge’s progress. “They’ve kept their foundation of the business and what makes them strong, and then they’ve made themselves more like a corporation instead of a small family business. They’re still keeping their core family values, but running it more like a corporation. We are very proud of them, and their commitment to being the best they can be.”

Bernier says management and supervision were two of the main aspects of their business that she and St. Onge improved on, including watching cost-per-equipment over cost-per-operation. She says they’ve also been more proactive instead of reactive and have planned their wood flow almost a year ahead as a result of the coaching.

“Joel does still run equipment when it’s absolutely necessary, but he’s definitely pulled back at least 75 per cent,” Bernier says. “Now he thinks, ‘Who else can jump on the machine?’ before himself, which is huge in our company because he needed to step more into a managerial role and that he definitely has done.” Bernier says that has led to managerial decisions being made more cohesively between St. Onge and herself.

The couple are also raising their daughters Genevieve, 16, and Arianne, 9. Between parenting and running a business their free time is not ample, but Bernier says the coaching has helped them manage it more effectively.

Caron’s last visit to St. Onge was on Jan. 29 and Bernier says she and St. Onge feel well-equipped to move forward.

According to Caron, it’s such results that make investing in the program worthwhile. “Folks need to spend money to make money. Sure, the companies have to pay for this service, but you know that they’re getting a big return on investment on it — their contractors are becoming more competitive and that’s only going to help them in the long-run as well; it’s a win for everyone.”

Fleet at a glance