Feb. 26, 2018 - Derek Tchir is a logger because he likes the smell of trees. He’s surprised when I tell him that’s the first time I’ve heard that response. 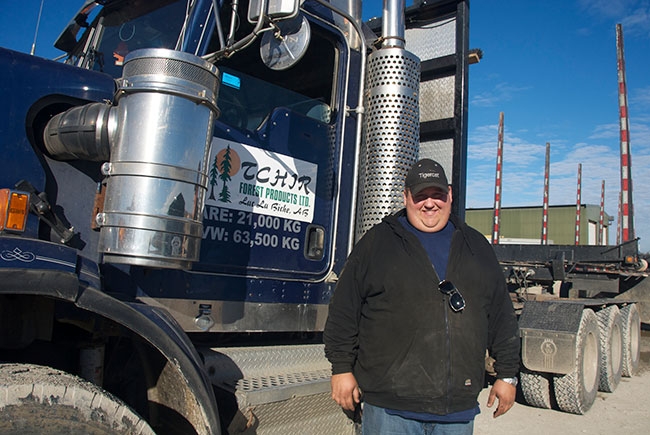 “Really? You haven’t heard ‘the smell of logging’? It’s just like at a sawmill, the smells are the best part of it all,” Tchir tells me during our chat in the office of Northland Forest Products sawmill in Fort McMurray, Alta.

The 30-year-old is a fourth-generation contractor and the owner-operator of Tchir Forest Products run out of Lac La Biche, Alta. – about 220 kilometres northeast of Edmonton. The company logs six months of the year for Northland.

Tchir was introduced to the logging life at an early age – he estimates around four or five years old – when he would head into the bush with his father, Felix Tchir. As a young adult he became more involved in the family contracting company. At just 17 Tchir was unexpectedly handed the reins when his father passed away.

“I’m fourth generation on both sides of my family, my mom and my dad,” he says. “That’s all we do is log so it was natural for me to take over. My mother Geraldine deserves a lot of credit. She was around for the ride.”

Tchir also employs his younger brother, Daton, who runs the company office and is the safety manager.

Logging in the Tchir family dates back to the 1950s when their great grandfather began Tchir Forest Products, which was at the time a logging outfit as well as a small sawmill in Lac La Biche. The mill operated until the 1990s.

For about 20 years Tchir Forest Products logged for Alberta-Pacific Forest Industries’ pulp mill near Boyle, Alta. In 2014 Tchir began his current employment with Northland. The contractor operates from about early October to early April, and employs about 30 people, working 24 hours in two shifts.

Tools for the job
The company runs approximately 35 pieces of equipment, as well as a single log truck that Tchir drives for Northland during the off-season.

“We’re Tigercat guys,” Tchir explains. “My dad actually bought the first Tigercat skidder in Alberta from Strongco, and one of the few first bunchers. We’re die-hard Tigercat and Komatsu.”

Tchir’s newest purchase is the 630D Tigercat skidder. The 630D has a two-position rotating seat and full rear facing drive control, as well as a long wheel base for higher load capacity and better stability in tough terrain – ideal for the ground conditions in northeastern Alberta.

A Tigercat 635 skidder – the largest skidder model on the market – is on the wish list, Tchir says.

The Hitachi 210 processor is a recent used purchase. “We only work six months out of the year so we chase the used market and then we fix and do everything in the summer so that we’re good for that six months. It keeps our costs down a bit,” Tchir says.

Tchir will operate most of the machines as needed. “Whatever comes up I do, just to keep busy – buncher, processor, whatever. It’s spread out pretty even. Whoever’s not around I’ll fill the gap.”

Sticking to the basics
Tchir Forest Products is a stump to roadside company; they leave the loading and hauling to other contractors. The operation model is full-tree felling, skidding between 50 and 350 metres, and processing roadside.

“We never really did experience stump to dump. We tried it in the early 2000s but went away from it to stick with what we know,” Tchir says. “Hauling means you are dealing with the highway and dealing with the public. It’s better we stick to what we do best.”

The company harvests about 100,000 cubic metres each winter season for Northland. Working only in the winter allows the loggers to access pine, spruce and poplar, which in northeastern Alberta often grow in patches surrounded by muskegs.

Northland’s quota is in the Alberta-Pacific Forest Industries’ forestry management area, which covers about 6.37 million hectares stretching from an area north of the Boyle to north of Fort McMurray, and east to the Alberta-Saskatchewan border.

Tchir will log cut-to-length or tree length depending on the operation, and more so the hauling contractor capabilities. “It changes per cut block, weekly or by area. It’s all luck of the draw. If the mill is out of tree-length or they need more cut-to-length we do that. Everyday it’s a different story,” Tchir says.

Hiring young
Tchir has a few theories for why he now finds it easier to hire quality staff, and in particular younger staff. It could be the oil and gas downturn, which means there is less work and lower pay expectations. It could also be his leadership style.

“In my whole crew probably 70 per cent of them are around 21 and 22. We’re getting lots of young guys coming in now. It’s good because for the longest time we couldn’t find anybody,” Tchir says.

“These younger kids are turning out well but there aren’t very many loggers to choose from. I’m probably one of the youngest contractors out there so I’m willing to give them a chance,” he says.

When young loggers come looking for a job, it’s easy to determine whether or not they are going to measure up, Tchir says. “You can usually tell within a couple days if they are going to be good. If they are no good you get rid of them right away.”

Tchir’s other employees are seasoned; five or six of them are going on 20 years of logging experience. “They’ve been there so long – some of them since I was eight years old – so they’re not even workers, they’re more like family,” Tchir says.

Slow and steady
While speed is important to harvest the required volume in the six-month time frame, Tchir is focussed more on quality and what is left behind after the iron moves out.

“We are usually pretty fussy in terms of our stand structure and everything – we always take that over and above to make sure the vegetation stays there and it looks better when we’re done. There is a lot of planning involved. Same with our log quality. We go slower to do a better job,” Tchir says.

Many of their cut blocks are in the salvage area from the Fort McMurray wildfire in 2016. Salvage work is difficult and slows the entire operation down, Tchir says, but it’s necessary the first few years after a fire. If the stems are left partially charred, insects that lay their eggs in burned wood will soon contaminate them.

“On the buncher and the processor end it’s a slow go,” Tchir says. “You have to cut out a lot of waste. It depends where the fire was. If it was at night the fire was nice and low it wasn’t bad but in the day when it was burning high there is a lot of waste.”

Tchir is happy with where the company is at today – working hard during the winter season and finding other work during the summer.

“I think the future is looking good as long as we keep it up,” Tchir says. “I don’t expect many changes. We’ll keep doing what we’re doing because it’s working.”

The only big change he wants: the 635 skidder.