Walking around the 20 acres that contain B.C.’s largest lumber reload centre, it’s easy to imagine the controlled chaos that will soon take place when there is enough wood on site to fill 30,000 shipping containers.

The multimillion-dollar Lulu Island Terminal in Richmond was purpose built for Vernon-based Tolko Industries, the world’s fifth-largest producer of softwood, to consolidate its distribution system from 12 reload centres into one. It’s a strategic move for Tolko, which says it is taking a long-term view of the various markets it is servicing.

“The new warehouse boasts a 200,000-square-foot building, offering weather-proof product protection, on a 20 acre site,” says Jamie MacMillan, Tolko’s general manager for logistics and supply chain, while giving Canadian Forest Industries a tour of the site days before it went operational. “It will have the capacity for 20 railcars, that can be switched two times per day from CN, plus four loading bays, with a total of 13 truck ramps. Lulu Island will be capable of handling 30,000 shipping containers each year.”

Founded in 1956, Tolko has grown from a small sawmill in Lavington, B.C., to being a leading manufacturer of lumber, veneer, plywood, oriented strand board and kraft papers, with operations across Western Canada.

Asian Markets
According to the company, five years ago just 8% of Tolko’s products from Western Canada were heading overseas. Today, more than 40% go to these growing markets, including China and Japan. The U.S. accounts for only 50% of Tolko’s production now.

“This new facility ensures Tolko will deliver the quality product with the timeliness we pride ourselves on to our growing Asian-Pacific partnerships,” says MacMillan.

Construction of the facility is further confirmation that the trend towards more lumber exports to Asia is not a short-term trend and that this market is going to be part of the big picture going forward. With a recovering U.S. housing market, and the shrinking timber supply in the B.C. Interior, experts predict higher prices in both the U.S. and Asia.

Top-grade lumber, known as J-Grade, from Interior mills goes to Japan, while lumber for construction forms or further manufacturing into products such as mouldings heads to China. Recently though, Chinese customers are moving up the value chain, adding higher grades of lumber to their purchasing list, something analysts think will continue.

David Elstone, an analyst with the consulting firm ERA Forest Products Research, was recently quoted as saying China came along at just the right time for the B.C. lumber sector. “We have a whole spectrum of markets to service, which is wonderful, given that we have the mountain pine beetle and the lower quality wood generated because of it.”

According to the Vancouver research group International Wood Markets, despite a drop in China’s overall appetite for lumber – it declined 1.3% during the first seven months of 2012 – and on-the-ground evidence of building sites being left unfinished, Canadian exports have still risen by 2%. Canada was the world’s top lumber exporter last year, sending 3.8 million cubic metres of lumber to China for the first seven months, surpassing even Russia, which exported 3.6 million cubic metres.

And Tolko is taking the lessons learned from its partnerships in Japan, China and Korea “to develop opportunities in other countries that are just beginning to discover the strengths of wood from both a construction and environmental perspective, such as India, where shipments have doubled each year since 2009,” says MacMillan.

Given that long-term emphasis on export markets, Tolko feels the time is right to invest in shipping logistics.

Environment and Infrastructure
By having all transportation modes in one location, MacMillan says, Tolko will save money by eliminating some extra trips.

“In some instances we were unloading from rail to trucks to get it to the reload centre where it would be unloaded again before being put in a container,” says MacMillan.

The transload facility will be operated and managed by Coast2000, the leading and largest third-party logistics marine container export service provider in Western Canada.

Located next door to Coast2000’s 30-acre container storage yard, Tolko is able to match cargo with readily available containers and eliminate thousands of truck moves annually, as the company is able to load containers that otherwise would be returned to a port empty.

“This facility is a great example of how strong partnerships in the supply chain can create a competitive advantage in getting products to Asia-Pacific markets,” commented Coast2000 president Morley Strachan.

“This location provides not only a cost benefit and competitive advantage for Tolko, but also a positive environmental benefit,” says MacMillan. “We’re essentially taking 30,000 trucks off the road.”

The major reason Tolko built its transload facility on the site in Richmond is that it is really in the centre of Vancouver’s three major ports, says MacMillan. “In terms of truck transport this site is equidistant.” The company also chose the site because of a new highway truck bypass, which allows for better and faster access to the location.

“One of the rationales for building the reload centre was because of the efforts of the provincial and federal governments and the Port of Vancouver to improve road and rail access so as to increase the efficiency of products moving in and out of the port,” says MacMillan.

“We commend the government for its continued focus to support the forest industry’s efforts to diversify and meet the increasing demands for wood products in Asia through programs such the ‘Gateway Initiative’ and ‘Our Natural Advantage: Forest Sector Strategy for British Columbia,’” Tolko president and CEO Brad Thorlakson said.

The warehouse, which measures three football fields in length and one football field in width, is intended for housing any offshore product, such as OSB and plywood, that needs to remain dry. It also holds all of Tolko’s lumber being shipped to Japan.

“Japan has been a steadfast base and we know this facility with its tremendous capacity to protect our products from the weather during transit will be particularly welcomed,” says MacMillan. “What offshore people can’t stand is moisture and their wood getting mouldy.”

The warehouse can hold an estimated 25 mmfbm and the floors can hold 1,000 pounds per square foot. Its 20- by 30-foot doors can accommodate a full-size truck, which can enter the building and un-tarp and unload inside the building.

The Lulu Island Terminal will operate seven days a week, and although the U.S. market is likely to pick up as housing starts increase, Tolko will use the facility to serve its Asian customers to make sure it maintains and grows its access to offshore customers.

Five years ago the Asia-Pacific market, and China specifically, was more of a concept for Tolko. Things have since changed dramatically, and its transload facility was built for the new reality. 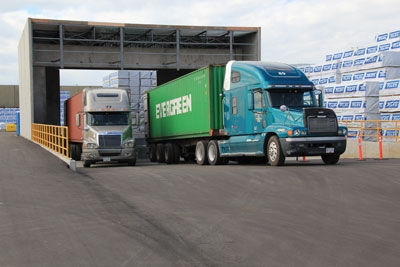