June 15, 2017 - What would you do if the 2x4 market suddenly collapsed overnight? Would you be able to quickly pick up the pieces and adapt? The thought of this happening is what prompted Maibec to develop a $25-million investment plan for its mill in Saint-Pamphile, Que. 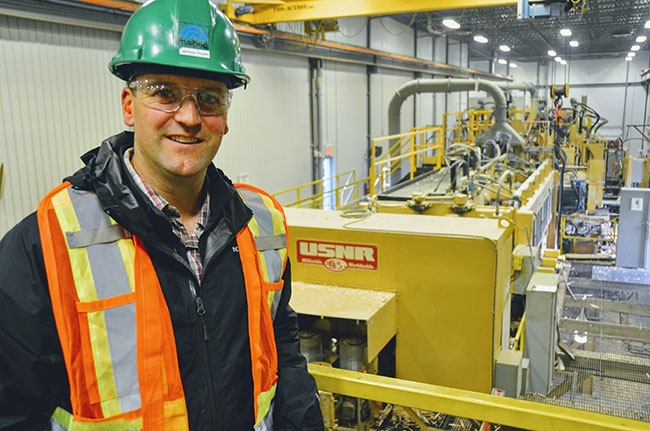 It all started in 2010, when Maibec had an in-house contest to determine where the next major investment would be made. While several stakeholders of the leading exterior cladding manufacturer were partial to building a new wood siding mill, the general manager of the Saint-Pamphile lumber mill, Jean-Sébastien Pelletier, prepared a pre-feasibility study showing it would be possible to not only increase productivity and reduce processing costs, but also be more flexible and adaptable to market demands.

After touring several sawmills in Europe and North America, the project was reworked and finally accepted by the management team in 2012. The plan was to invest over $25 million in three phases in order to modernize the company’s sawmilling, planing and drying equipment.

“We had not invested in our lumber mill since 2003 and we were lagging behind,” explains Charles Tardif, vice-president for supply and business development at Maibec. “We had a rather archaic mill at that point. If we didn’t invest, we believed we wouldn’t have made it through the next major recession.”

To increase flexibility, Maibec partnered with Fonds de solidarité FTQ, which became a minority shareholder in 2012. “The partnership allowed us to spur growth and make the large investments required,” Tardif says.

Pelletier’s mission for the Saint-Pamphile mill was to boost productivity, mechanize operations and increase material yield, all while providing a safer workplace for employees.

The first step was to replace the two old sawmill lines with an ultramodern USNR line in July 2014. “We chose a complete line with several independent modules, which now gives us full agility and flexibility,” Pelletier says. The line features a scanner at primary breakdown, a very fast and accurate log turner (Knuckle Turner Infeed), a canter and an independent dual profiler, and a quad bandmill.

“Once out of primary breakdown, I can have four products headed to the trimmer, which can have any desired size,” Pelletier says.

When the cant is sent to secondary breakdown, it first goes through the canter module, in the single profiler and the bull vertical shape saw (BVSS).

“The advantage of that sawing equipment is that it can have three band saws. From one log to the next, my saws can change place to produce a 5/4 or a two-inch board,” Pelletier says. This versatility translates into a rate of 23 logs per minute for eight- to 16-foot logs, at a peak speed of 600 linear feet per minute (FPM) (average speed of 500 FPM).

The new line now produces more than the previous two lines combined and production has increased from 31,000 to 41,000 feet per hour. At the same time, material yield has dropped from 3.9 to 3.4 cubic metres per 1,000 feet.

An Autolog trimmer, installed in 2003, and a Carbotech sorter with 120 compartments, installed in 1997, are still used at the sawmill.

Investments
Maibec also replaced the work of two manual sorters in April 2015 with a Comact GradExpert, an automated grader at the planer mill. “By simplifying the process, it allowed us to not only have more stability, but also increase productivity,” explains Jérôme Poulin, the process engineer who gave us a tour of the mill.

“We now aim for maximum profits with our products, since we increased the amount of higher quality wood, while reducing trimming,” Poulin says. The result is a return on investment that was much quicker than expected.

Last December Maibec completed its investment in the planer mill by installing a new Gilbert S-Series planer. “The machine, designed to run at feed speeds of up to 2,000 FPM, was the ideal size to meet the mill’s needs,” Pelletier says.

For the moment, investments in lumber drying equipment have been postponed since the Saint-Pamphile mill has developed new opportunities for value-added green wood products. However, the five Hildebrand kilns still meet the company’s needs.

Two material handlers, from Liebherr and Sennebogen, were also purchased to improve operations in the lumber yard. “The two machines complete each other well since they don’t have the same capacity in terms of power,” Poulin notes.

With several tasks now automated, the number of employees has dropped from 150 to 125 at the Saint-Pamphile mill. However, those affected have all been relocated elsewhere in the company.

Maibec is in the process of attracting young talent. The company, which does the rounds in schools every year, has hired more than 100 people in the last two years, Tardif says. “As owners, we must make sure we have challenges commensurate with our teams’ expectations. We thrive on projects. It’s our way to get young people interested in us and offer them exciting challenges,” he says.

says the upgrades to Saint-Pamphile increased the value of the wood the mill produces.

Supply
Maibec requires 500,000 cubic metres of wood per year to operate the Saint-Pamphile mill. “Being along the border, on the free market, wood is expensive because competition is fierce,” Tardif says. “Our investments have allowed us to cut costs since our material yield is better. We also seek to develop niches for more specialized products, and create added value.”

Over the years, the company has taken risks to develop new products. Some attempts have worked well, others not as much, which was the case for the door and window market. Diversification is, however, part of what makes Maibec successful. Lumber, machine stress rated (MSR) lumber, studding, patio wood, siding wood (for other Maibec mills) and dimension lumber are among the 250 different products manufactured by the sawmill, according to section, length and quality grade parameters.

Future integration
“In 10 or 20 years, we will no longer just be primary processors. With a reduced supply available, the future is in vertical or horizontal integration,” Tardif says. Sweden, he says, is experiencing the same phenomenon.

At Maibec, the Saint-Pamphile mill is already the leading supplier of siding for the other mills within the group. The company is also looking at other ideas, but is focusing first on its customer base, Tardif says.

The acquisition of the Masardis lumber mill in Maine, some 80 kilometres away from Saint-Pamphile, will ensure a better wood supply for siding. This acquisition is all the more important today with the softwood lumber dispute yet again at the door.

With facilities on both sides of the border and an ultramodern, industry 4.0 lumber mill, Maibec is braced for the storm. “With all our investments, we are now among the top five mills in eastern North America,” Pelletier says.

Maibec’s 70-year history
The story behind Maibec goes back to over 70 years ago when the Lagueux brothers started a pulpwood brokerage company. In the 1950s, the brothers purchased their first mill in Saint-Pamphile and continued to acquire woodlands.

In 1969, the company became Maibec, a contraction of Maine and Quebec, to reflect the locations of the company’s wood supply areas. The same year, Maibec opened its first shingle mill in Saint-Pamphile.