Dec. 13, 2013 - Which primary breakdown system a sawmill chooses to purchase is – and always should be – based on a multitude of important factors. These include a reputation for reliability and fibre recovery performance, as well as the ability to provide effective ongoing support. A specific sawline manufacturer might also be top choice because there is already a strong established relationship or a solid reputation. The right breakdown system is also selected on the basis of suitability to the mill’s raw materials: tree species, log size, and so on.

Here are some stories of how several sawmills made their decision when upgrading their systems.

Vanderwell Mill
A new primary breakdown system was chosen a few years ago at the Vanderwell Mill in Slave Lake, Alta. The company processes about 80 per cent spruce, with the majority of the rest being pine and a little Balsam Fir, into 6 to 16-foot 2x3”, 1x4”, 2x4” and 2x6” lumber. The mill owners chose a Comact OLI (optimum length infeed) canter quad with circular saws and chipping heads, with a TBL3 gang edger downstream. The side boards off the canter quad go to a three-saw board edger.

Mill operations manager Chris Schischikowsky explained that when they were looking for a new system, Comact’s equipment stood out because it was built “very rugged and heavy” compared to other companies’ offerings. Comact’s “very user-friendly” software was also of note. “The log size range we required was up to 17 inches and with the log profile we have here, it was the best fit,” Schischikowsky adds. “All the equipment came in modules and was very easy to install and connect.” They were also impressed with the Comact wave feeders as well as their newly designed merchandizer deck with travelling saw modules. “We felt at the time of ordering that we would trust one supplier for the entirely new line,” he says, “and we have been very pleased with the results.”

James Jones & Sons
Having a well-established relationship was a very important factor in purchase decisions when James Jones & Sons invested €26.5 million a few years ago in a new, high-tech mill in Lockerbie, Scotland. The company’s “Lockerbie 3” softwood mill features 13 AKE Sawmaster bandsaws, two canters and two Exeltec edger optimizers, all from Söderhamn Eriksson, providing production of over 250,000 m3 per year.

This is the fifth sawline James Jones has bought from the company since the 1980s. “There were a number of reasons why we chose Söderhamn Eriksson as our supplier of the sawline for Lockerbie 3,” explains CEO Ian Pirie. “First of all, we’ve had a good relationship with them for many years where they have proven to be a reliable supplier. [Additionally], we were looking for a bandsaw supplier who could give us the speed and the flexibility we need to maximize production and recovery from each of our varying log assortments. Söderhamn Eriksson was also the supplier who could give us the sawline with the highest flexibility, and thus [give us the ability] to maximize our yield.”

Lockerbie 3 was intended to complement existing James Jones infrastructure and woodworking facilities, which includes drying, planing, sorting, ripping and packeting capacity. “It’s the largest development project of its kind the company has realized to date,” says Pirie. “This reflects the longstanding co-operation we’ve had with all our contractors and suppliers, and Söderhamn Eriksson is one of our most experienced and reliable suppliers.”

Optimization supervisor Francois Savoie says the company chose Autolog mainly for great service over the years, as well as the reliability of its previous systems at the mill. “The new lines allow us to get a great recovery factor,” he adds. “We’ve improved our raw recovery factor from 4.35 down to an average of 3.7, and it keeps going down with Autolog’s help on the optimization.”

One of the new production lines is for big lugs and the other is for small ones, explains Savoie. “The main line has two Autolog scanner/optimizers, one before our twin saws and the other one before our bull,” he says. “The secondary line only has one scanner because of space constraints, but there is a second optimizer that takes the scanner reading to get the job done on that line’s bull.” Temrex also purchased an Autolog edger and trimmer, both with Autolog scanners and optimizers.

Another aspect Savoie greatly appreciates about the company’s Autolog system is the capability to calibrate the scanners and modify or verify parameters from anywhere in the mill. (All Autolog systems offer this wireless setup.) “I have it on my cellphone and iPad, and it’s very useful,” he says. “Before we had it, we had to go in the control room to make changes, check on them, return for adjustments and so on. It was quite time-consuming.”

Stimson Lumber
A good working relationship was also important in choosing a USNR breakdown system at Stimson Lumber’s Tillamook Operation in Oregon. It was installed by West Coast Industrial Systems during summer 2013. The system includes a USNR L&B 6’ vertical twin bandmill and a three-zone sharp chain outfeed for separation and dispatch. An update of the controls was also completed. The mill produces 8’ studs, 2x4” and 2x6” from hemlock (about 50 per cent), Douglas fir (40 per cent) and Sitka Spruce.

Tillamook plant manager Chris Stirk says that besides choosing this company’s tech because it’s very accurate, “we like to work with USNR because we don’t just feel like we are getting equipment…The relationship feels like we are both in this together and that we are both tied to the success of the operation, installation and performance.” Stirk believes the fact that USNR provides the equipment, training and follow-up services is critical to ongoing success. “No company, including USNR, is without mistakes or glitches, but the communication functions and we can work together,” he says. “The twin installation went quite well and we have easily achieved our objectives of increased fibre production and improved cutting quality.” He adds, “The combination of the new USNR L&B with the updated controls is key to our future growth and success.”

At Vaagen’s mill in Midway, B.C. (operating under Vaagen Fibre Canada), rough dry dimension lumber is produced with a HewSaw R200 MSA SE and a new HewSaw double rotator log positioning system. This replaced a setup that included three lines, two chipper canters with bandsaws and one large log headrig. “Downstream from the breakdowns were a series of gang edgers, two board edgers and lumber lines everywhere,” explains vice-president Russ Vaagen. “Now there is just the one HewSaw line, producing 2x4”, 2x6” and 2x8” in lengths mainly from 8’ to 20’ from mostly lodgepole pine, with some Douglas Fir and Western Larch.”

Vaagen says they went with HewSaw for this update in 2011 because they already knew the company. “We were the first to buy HewSaw in North America in the late 1980s,” he explains. “They were proven in Finland and we have similar forest lands here, so it was a natural fit. They are great to work with and the company is a medium-sized family business just like we are. They stand behind their products and are constantly developing innovative ways to improve the process of cutting small-diameter logs.”

In Vaagen’s view, the update at Midway was as much an opportunity as it was a choice. “Since it was about 11 years old when we bought it, updating was required,” he notes. “HewSaw took the machine to their shop in Abbotsford, B.C., and updated it so it was like new. If this machine was not available, we would have had to evaluate what machine to purchase.” He adds, “We will be buying more HewSaw equipment in the future when opportunities present themselves.”

Hyne & Son Pty Limited
At the Hyne & Son Pty Limited mill outside Maryborough in Queensland, Australia, many factors were considered in its primary breakdown system selection. Linck sawlines (the first installed in 1989 and the second profiling line in 2002) were chosen after a global review of the available technologies.

The mill produces predominantly structural products for the domestic market, with the majority 7.5 and 10 cm thick made from Southern Pine.

Multiple factors always play a role in important decisions such as choosing a primary breakdown system. In these cases, an established working relationship and the reputation of the company stand out as key considerations. 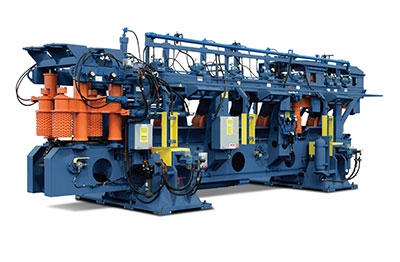 The Comact machine installed at Vanderwell Contractors in Slave Lake Which primary breakdown system a sawmill chooses to purchase is – and always should be – based on a multitude of important factors.
Print this page