March 13, 2018 - The re-opening of the sawmill in White River, Ont., was one of the lumber industry’s rare “good news” stories of 2013. Shuttered six years earlier, the town’s population had dwindled to nearly half its size from the 1990s. Then numbering about 600 residents, the Township of White River and the nearby Pic Mobert First Nation joined forces to create White River Forest Products LP (WRFP). Led by CEO Frank Dottori, the renowned founder of Canadian forestry giant Tembec, the new venture invested heavily in restoring the site and creating a new model of efficiency in Ontario’s north.

The centerpiece of the new mill is the new saw line and the infeed deck with the new debarker. Equipped with 14 scanners to achieve dramatic improvements in the mill’s yield from every tree, the new saw line can out-produce all three of White River’s previous lines put together. The next challenge was to match that efficiency in the yard’s loading capability. For that task, WRFP has turned to Sennebogen 830 M-T purpose-built material handlers.

Robert Acs, the yard manager at WRFP, recalls the effort to move wood as fast as the saw can process it. “We acquired some older equipment with the assets we purchased. We tried upgrading to another material handler but it only lasted six months. We could see it wasn’t working out.”

Getting up to speed
In the meantime, the yard contracted out a loading by-the-hour service with Dan Bolduc of DKR Trucking. Bolduc was operating an 830 M-T, specially designed by Sennebogen to pull a large trailer. The 830 took on the yard’s full range of loading duties: offloading trucks, stockpiling the wood, forwarding logs to the mill on a trailer and loading the infeed from the trailer.

With a front row view of how Bolduc’s machine did it all, Dottori and the WRFP board soon approved the purchase of another unit from Strongco, the Sennebogen distributor located in Sudbury, Ont. Strongco’s Danny Virgoe explains how the 830 M-T adds to the success of the mill.

“White River, located in north Ontario deals with cold and harsh weather conditions. Some equipment just isn’t designed for extreme conditions like this. And this part of the world is no place to be looking for repair parts in a hurry,” Virgoe says.

“Uptime is critical,” Acs agrees. “It’s a full day for the bus to deliver in-stock parts from the Strongco branch in Thunder Bay. A week is pretty good if we need anything from the factory. But these are low maintenance machines. They work 20 hours a day, five days a week. We’ve put 13,000 hours on our machine in two and a half years; Dan has 17,000 hours on his 830 — but we haven’t had any major downtime with the machine.”

On the move
Surviving the cold of White River winters is just one of the challenges for the Sennebogen machines. Wicked freeze and thaw cycles in the spring leave the yard in a slippery, boggy condition: tough sledding when you’re pulling a big load. Forwarding from the stockpiles to the deck can be a trip of up to 700 yards. The undercarriage’s higher clearance is uniquely designed for the job, with dual transmissions to drive each axle and with a frame specially reinforced against pulling stresses.

Sennebogen’s elevating Maxcab provides operators with the visibility to keep the site safe while unloading and stacking. The cab’s sliding door and catwalk allows safe entry and exit, especially when the yard is filled with snow and ice.

Acs notes that the high lift of the material handler further reduces any potential delays in forwarding cycles.

“We can stack more wood closer to the mill, so that saves travel time,” he says.

With the upgraded saw line, White River can produce up to 40,000 board feet per hour. Processing black spruce and jack pine logs from 4” to 20” in diameter, its chip volume has been reduced by half. The mill now yields more lumber from each tree. At full capacity, it targets 150 million board feet of FSC-certified products, with about 70 per cent in 16’ lengths of 2 x 4 and 2 x 6.

The return of the mill has led to a rapid resurgence of the town. With 160 employees at the mill, White River is seeing the return of experienced workers like Acs. The town’s population has risen again to more than 1,000, and its most pressing problem these days is housing its new residents. 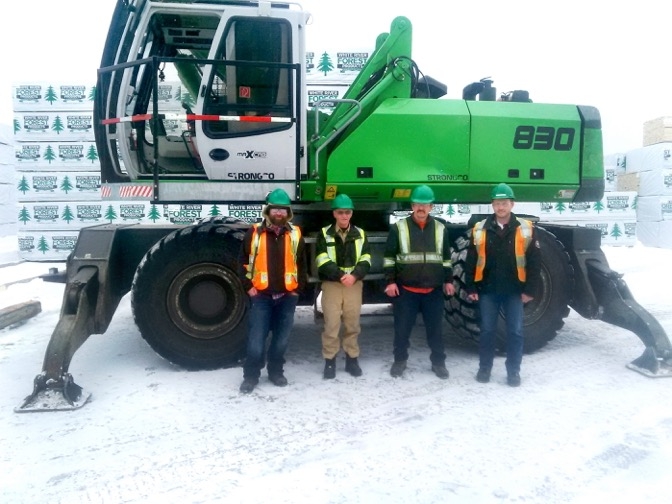 From left to right: Rob Acs
Print this page