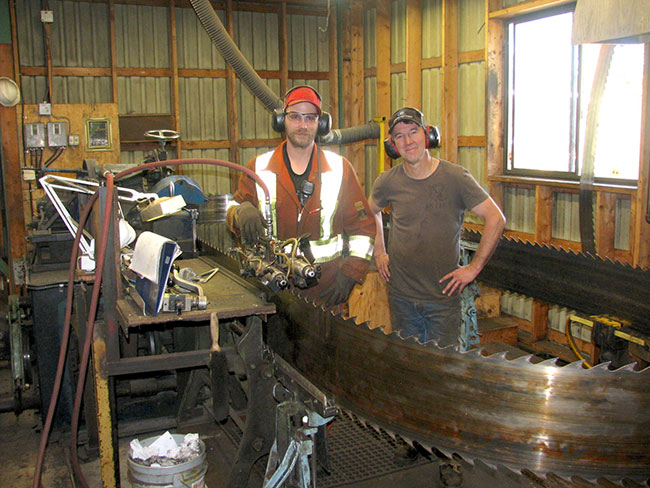 Corey Bourke and Wade Lewis handle all the filing duties at Errington Cedar Products in Errington, B.C., on Vancouver Island.

Errington Cedar Products in Errington, B.C., on Vancouver Island may not be a large mill, but what it lacks in size it more than makes up for in the quality of its product and commitment to its employees. One way management shows its commitment is by training apprentices in-house and then giving them the reins to show what they can do without the baggage of labels such as “inexperienced” weighing them down. Such is the case with head filer Corey Bourke, who isn’t about to let his short three years in the trade stand in the way of getting the job done and doing it to a level that helps Errington remain at the top of the very competitive appearance-grade cedar market on the island.

With only 60 employees it will come as no surprise to learn that the filing room is suitably trimmed down in size. Corey and his opposite-shift partner, Wade Lewis, handle all the filing duties themselves including several different sizes of bandsaws, processor chains and a good number of roundsaws thrown in to keep things interesting.

Primary breakdown starts with the “pond saw,” which uses a 28-foot processor chain on a 14-foot bar to tame the large, awkwardly shaped cedar butts down to a size the mill can handle. High-pressure water removes the bark from these non-circular logs and Corey has found that a five-degree hook is ideal for ripping the cedar lengthwise without damaging the fibre.

From there the logs head to the primary breakdown saw, which for Errington is a seven-foot Kockums Cancar doublecut headrig. Corey and Wade deal with the 48-foot 14-gauge saws every four hours as the acid in the cedar dulls the saws relatively quickly. By contrast the roundsaws will run about 16 hours with no troubles.

The other bandsaws they look after are a 42-inch Turner twin-resaw that spins two 29-foot 18-guage saws and a 48-inch powell unit that they keep as a back-up. To keep the bandsaws sharp and properly benched, Corey and Wade rely on tried and true Armstrong products. They run a #5 Armstrong stretcher-head on a homemade bench and when everything looks perfect they go onto either the #2 or the #6 Armstrong grinders for sharpening. A favourite tool of Corey’s is the Armstrong Magnum Swage, which saves the filers’ arms from the rigours of keeping the many bandsaws on-size. 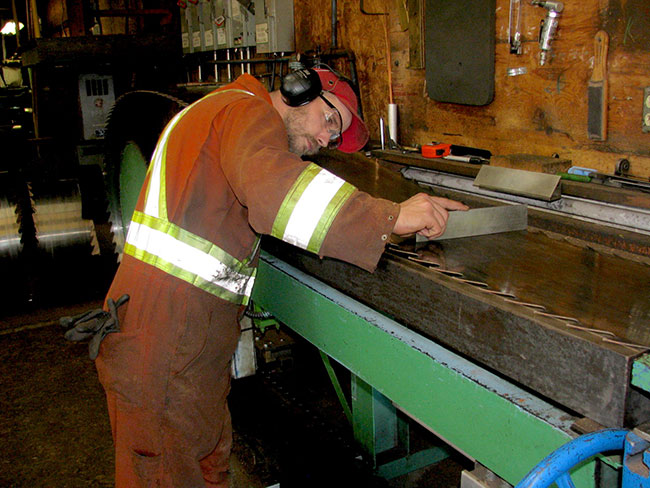 The roundsaws from their Ukiah shifting board edger and their three-saw trim system are prepared using an Armstrong 3-10 circular stretching roll and then sharpened on a Wright W150 HD top and face dresser, a Wright W350M side dresser, or, in the case of the hollow-ground saws, an Armstrong #17 grinder.

The mill runs mostly western red cedar, but will also run hemlock and balsam as required. To do this, Corey adjusts his benching of the saw to suit the type of wood the mill needs to cut. For example, he likes to run a little less tension and a larger kerf for the cedar – a trick he has learned through constant evaluation and experimentation. Corey recalls the first time the mill ran hemlock under his watch and the learning process that entailed. At the start of the run, the headsaw was running a very high deviation, which tested the newly minted head filer to his limits. However, with some online help from his fellow filers, he was quickly able to wrestle the numbers back into very solid territory and he hasn’t had trouble with it since.

The filers at Errington Cedar are fortunate enough to have a committed, supportive management team that accepts ideas for improvements and efficiencies and then works with Corey to keep the mill on top of any situation that arises. The quality control person works in harmony with the filers instead of against them to ensure that Errington’s reputation for a superior product is maintained.

“Errington Cedar Products’ filing operation and crew have been the backbone of our sawmilling success. Our dedication to quality and precise cuts make us an industry leader in high value sawn products in all species. We believe that reputation will continue to make our sawmill viable now and in the future,” Errington Cedar president Brad Meeker said.

If Corey and Wade have proved anything during their time at Errington Cedar it’s that you don’t have to be a grizzled veteran with sawdust in your blood to get the job done, and that inexperience doesn’t automatically mean a compromise in skill or quality. Sure, they will get better in time and, yes, there will be some bumps in the road, but the young filers at Errington Cedar Products have earned their spot in the mill and there is no reason to doubt that they have long rewarding careers ahead of them.

We are looking for other filing rooms that would like to be profiled in this space. If you are interested, please ask your mill management for permission. The mill will always get final approval on the article before printing. I can be reached at trevor.shpeley@gmail.com.