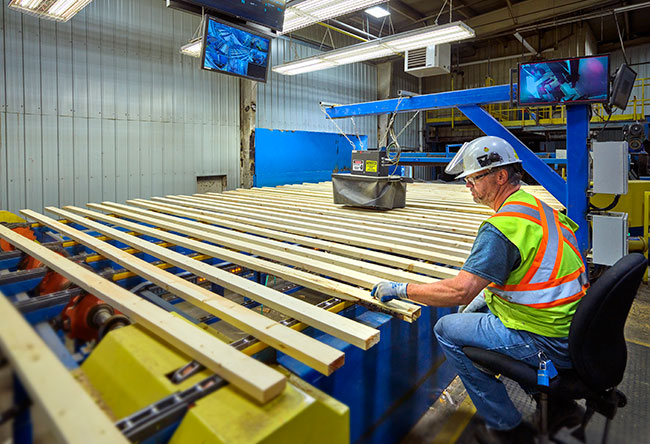 In 2019, Millar Western Forest Products celebrated their 100-year anniversary – a major accomplishment that few forest products companies in the country can claim. But the company is already focused on the next 100 years, having recently invested $36 million to upgrade their operations.

Headquartered in Edmonton, Alta., Millar Western got its start in 1919, when J.W. Millar incorporated his first company, Western Construction Ltd. In 1921-1922, he acquired a timber berth in the Whitecourt, Alta., area, marking the start of the company’s logging and sawmilling operations in Alberta.

Today, Millar Western employs approximately 700 employees across its divisions. Around 250 people work at the sawmill in Whitecourt, and about 80 people work at the sawmill in Fox Creek, Alta., which was acquired in 2007. Millar Western also owns and operates a bleached chemi-thermomechanical pulp (BCTMP) mill and integrated bioenergy plant in Whitecourt, and acquired a remanufacturing plant, Spruceland Millworks, in Acheson, Alta., in January 2018.

The sawmills produce dimension lumber ranging from 1×3 to 2×10, from six feet to 16 feet, along with five-quarter decking and other products at the Spruceland division, Tom Thompson, Millar Western’s general manager of wood products, tells CFI.

Around 60 per cent of these products go to the Canadian market, while 35 per cent go to the U.S., and the remaining five per cent is exported offshore.

The Whitecourt mill produces about 350 mmbf per year, running three 12-hour shifts along with a maintenance shift, while the Fox Creek mill produces 120 mmbf annually, running just one shift plus a maintenance shift. Approximately 80 per cent of the fibre for these products comes from Millar Western’s Forest Management Agreement (FMA) area and long-term fibre-exchange agreements, while the remaining 20 per cent is purchased on the open market, Thompson explains.

Having been around for over 100 years, Millar Western understands how to weather the ups and downs of the industry. One of the reasons for their success is their family-oriented culture, says Whitecourt wood products operations manager Darcy Veillette.

“The Millar family has had a strong family-oriented culture right from the beginning,” Veillette explains. “We have many long-term employees. We just had an employee hit a 45-year service anniversary this year, and multiple people have been with us for over 40 years. When you have that much experience and knowledge and can combine it with an appetite for new ideas and innovation, it goes a long way.

“Our people truly are the greatest resource we have, and we repeat that all the time – that’s kind of our mantra,” Thompson adds. “It’s what we truly believe in.”

Equipment upgrades
It’s not just the people who have helped drive Millar Western’s success. The company’s commitment to investing in new equipment and modernizing their operations is also key.

And, in 2019 alone, the company invested $36 million into its operations, including two major projects to replace the log yard overhead crane and upgrade the planer at the Whitecourt lumber operation.

The previous Kranco crane had given more than 30 years of service when it came down, Thompson explains. In its place, they installed a new 30-tonne portal Andritz crane.

“We spent a bit of money replacing the crane, and, at the same time, we took the opportunity to replace the rail and rail bed, while also improving the yard drainage,” Thompson says.

The $22 million project was completed over a 12-month period, and, given the higher capacity and efficiency of the new crane, Millar Western expects to see payback within three years.

Meanwhile, about $10 million went into modernizing the front end of the planer. The company installed a new Mill Tech Industries planer infeed system and tilt hoist. They also modernized the 614 Stetson Ross planer with a new electric drive conversion, feedworks and tensioning system from Wolftek, and installed a new automatic grading system, an Autolog ProGrader.

These investments have “allowed us to increase our line speed and efficiencies,” Veillette says. “By doing that, we were able to go from four shifts to three shifts, which matches our sawmill run rates.”

Despite dropping a shift, Millar Western still prioritized their employees.

“When we did that, we didn’t lay anybody off from that fourth shift – we did it through attrition,” Veillette explains. “So, if someone left, that was one of the 22 positions we downsized.”

“It goes back to our philosophy that our people are our competitive advantage and the greatest asset we have, so we protect our people as much as we possibly can, even when we’re doing capital upgrades,” Thompson adds.

“We want proven technology in our industry, and we want to know it works and works well,” Veillette explains. “We go physically take a look at it ourselves and talk to people who are running it to get a good sense that it’s going to work in our applications. We get buy-in from our people, buy-in from our vendors, and that makes sure we have a smooth start-up and good projects.”

The company turned to Mill Tech for much of the planer modernization project because they had experience working with them on the Fox Creek rebuild, Veillette says.

“We have a good relationship with them, and they make a really good tilt hoist that we put in. It performs well, as well as our trim line and trimmer.”

Likewise, they also had a strong relationship with Wolftek.

“They have a dynamic tensioning system that some of us have worked with in the past,” Veillette explains. “As well, we’ve done a lot of research with regards to Wolftek, so that was an easy call for us to make.”

When it came to the grading system, the company sent a group of employees to look at multiple different options. Ultimately, they agreed the Autolog ProGrader was the best one for the mill.

The company is already seeing a strong return on investment from the planer upgrade as a result of the labour reduction, cost reduction and grade improvements, he adds.

Both the planer upgrade and crane installation have met Millar Western’s expectations.

But completing these two projects was no small feat. It took over 40,000 person-hours of work – and it was all done without a single safety incident. 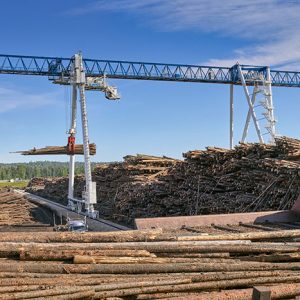 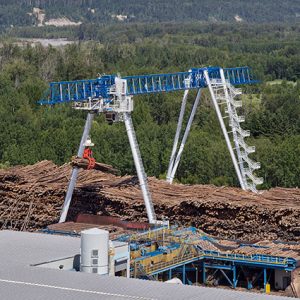 An aerial view of the new 30-tonne portal Andritz crane and the Whitecourt sawmill.

The next 100 years
These upgrades are just the beginning for the Whitecourt sawmill.

“If you take a look at the last 10 years of our history, major capital was spent on our Fox Creek mill rebuild. Once we got that up and running, we shifted to the pulp mill and did a massive project there with the bioenergy plant. Now that the bioenergy facility is up and running, the attention has switched back over to the lumber operations,” Thompson explains.

Having completed the Whitecourt planer and crane projects, the company is now planning upgrades to the sawmill itself, along with some of the other systems.

“Over the next few years, we’ll be undergoing – as you’ve seen, it’s already started – a modernization and capitalization project for the mill here,” Thompson adds. “The intention is to try to start staging the company for the next 100 years.”

“There are a number of initiatives that are clawing against our fibre basket, so it is a challenge, and will continue to be a challenge,” Thompson says. “We continue to work with the government to try to leverage any fibre advantages we can.”

Fortunately, some progress is being made. Veillette says the Alberta government has been a good partner to the forestry sector, implementing initiatives that are helpful for the long-term sustainability of the forest and the industry.

The COVID-19 pandemic is yet another challenge facing the sector. Many sawmills had to take downtime during the spring, and some were forced to close permanently. But Millar Western’s focus on their people helped them avoid taking any downtime at their sawmills.

“Our employees have bent over backwards helping us through this difficult time,” Thompson explains. “We’ve put a number of initiatives in place to protect our communities, our employees and their families, and we’ve been able to run through this entire pandemic up to this point quite successfully. We haven’t had a single case in any of our divisions.”

The Spruceland division did have to reduce their production capacity in the spring because of a sharp downturn in the repair and remodeling (R&R) market, Veillette notes. “But we are actually increasing production in Spruceland right now and running overtime because of the significant demand on that business.”

‘A strong, bright future’
Despite the difficulties presented by factors such as fibre-supply pressures and COVID-19, Thompson and Veillette are optimistic about the future.

“Once the world opens back up and we get a better understanding of what the new normal is, I truly believe that the underlying demand is there and our industry is looking at a pretty bright future in new construction, in some of the high-rise initiatives in mass timber, and in the R&R market,” Thompson says.

Looking ahead five to 10 years from now, Millar Western’s commitment to its employees and modernizing their operations in preparation for the future puts the company in a good position, Veillette adds.

“We’ll continue on like we always do, and the innovation that our employees show will continue to bring benefits. We’re always looking for opportunities to grow our business, and we believe we have a strong, bright future ahead of us,” he says.