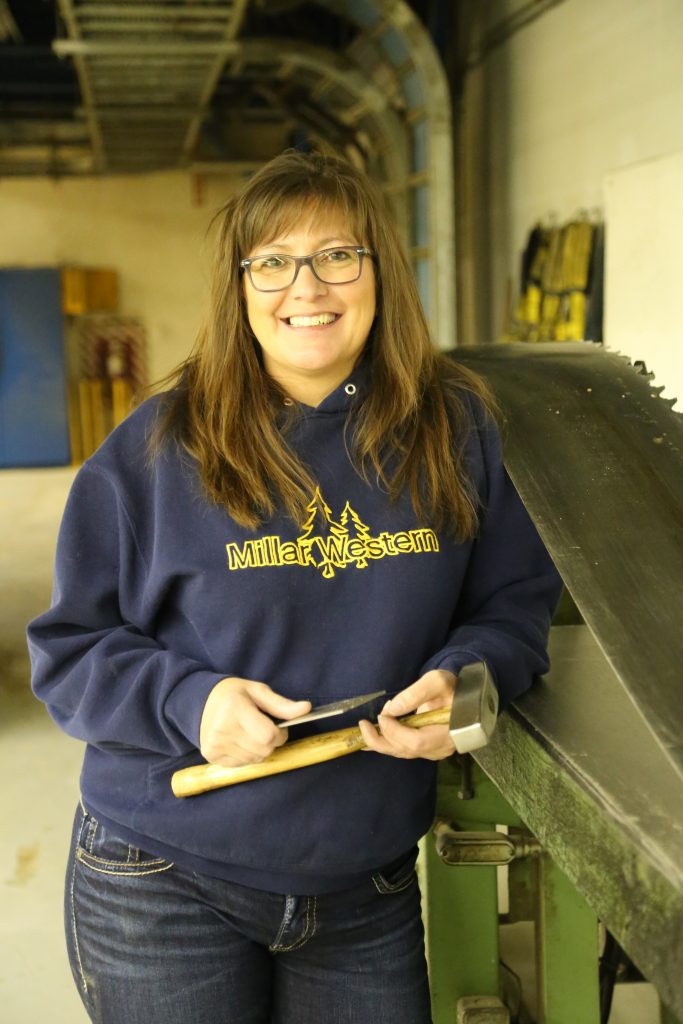 Stephanie Milburn, Canada’s first female journeyman sawfiler, originally had no idea she wanted to work in the industry.

After graduating from South Peace Senior Secondary school in 1989 she moved to Whitecourt, Alta., where Millar Western Forest Products was the largest employer. That was the main reason why she decided to join the company, and, happily, the fit was right. Milburn has been with Millar Western for 28 years now.

But, like her entrance into forestry, her introduction to saw filing was mostly about being in the right place at the right time.

“I started in sawmill production. After four years of sitting with the production guys in the lunchroom, it got boring,” she explains, laughing. “So, I started eating my lunch with an older fella in the sawfilers’ lunch room where it was quieter. During my time there I got a sneak peek at what the sawfilers did and I thought, ‘This looks interesting!’”

Soon after, she was recommended as a temporary replacement when a sawfiler became ill.

“Back then, few people were really interested in the saw filing trade,” Milburn says. “Not many of us went into the filing room – it was kind of their own little place. And were it not for me being in there, I would have never really known or seen what took place in the sawfiler world!”

Later, when a posting came up for a sawfiler apprenticeship, she jumped at the chance.

However, becoming a full-time sawfiler was a much more conscious decision that required a great deal of dedication, and, at the time, included four years of apprenticing and attending school to become a full journeyman. Milburn was the only woman in her class. In her final year of school, her instructor, Dennis Reid, told her she was the first female journeyman sawfiler that he knew of in Canada.

Milburn says her experience in school was largely positive, and everyone in her class seemed proud of her becoming the first female journeyman sawfiler. In fact, for the annual class picture, the other students brought her into the centre of the group and lifted her up high.

“They seemed pretty proud of me being there and becoming what we think was the first female journeyman sawfiler. The guys were actually quite amazing – they helped me out,” she says. “They were always offering advice and showing me how they fixed saws. I didn’t feel like I wasn’t wanted there. We went to the pub together after class, and I was just one of the guys.”

“In the filing shop, I wasn’t totally accepted right away,” Milburn explains. “It took a bit of time to show that I was capable of doing the work and to get to know the guys. The older fellas that worked there, they had no problem with me being in there, but for the younger guys it took some time for them to get to know me and for me to get to know them.

“I didn’t want any special treatment because I was a girl. I wanted the same as what the guys did – respect.”

Although the saws and knives were very heavy back then, Milburn made a point of not asking for help carrying them. “I felt that if I was going to do this job I needed to be able to do it physically,” she explains. “If I couldn’t, then there was no point in continuing with the trade.

“I remember at some points that I felt that I wasn’t wanted in there,” she continues. “Feeling this way actually just made me a better worker, because I made sure that everything that I did was 110 per cent, so that nobody could come back at me and say that I did bad work or couldn’t do the job.”

“The most helpful thing that I found was asking the guys for advice, watching how they did things and asking why they did it that way. Not once did I think that I should get special treatment because I was a girl,” she says. 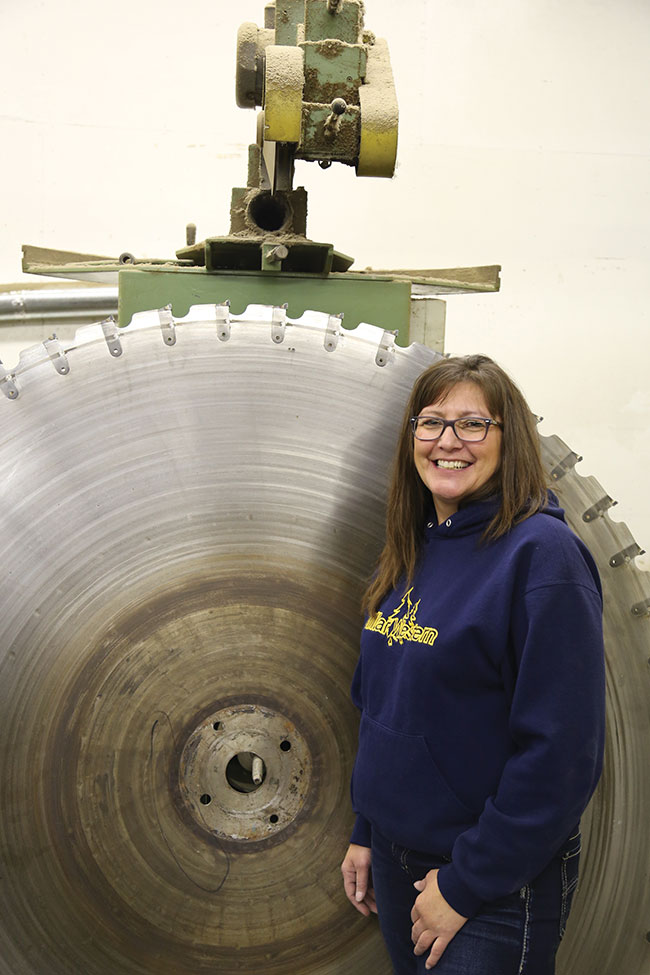 A different experience
Of course, today, the trades look very different from when Milburn started as a sawfiler. Women are still in the minority, but they are an ever-growing force that are accepted and welcomed by the industry.

Milburn’s daughter, Brittany, is an electrician at Millar Western, and when she began her schooling to become a journeyman in 2013, she was one of just two women in her class. But by the time she finished in 2017, there were 10 to 12 women taking the program.

To get more women involved in the trades – particularly in forestry – Milburn believes more promotion is necessary. For example, the Alberta Forest Products Association (AFPA) ran a social media campaign called #ForestryFamilies in late 2018, and is now running a social media campaign called #WomenInForestry. The first campaign consisted of five video profiles of families in Alberta’s forestry industry, including one about Milburn and her daughter, and the second profiles five women in different areas of forestry. And, this year, the Forest Products Association of Canada (FPAC) launched “Take Your Place,” another campaign aimed at highlighting opportunities for women in the forest industry.

Milburn says that these campaigns are a great way to promote the industry, particularly women in forestry.

“The trades are plunking along slowly, but as you can see, commercials are starting to include females with hard hats and coveralls, promoting that as well,” she says. “We’re still a little behind the times, but it’s definitely better than what it used to be.”

Back in 1991 when she started in the industry, women were often expected to become nurses or teachers, she says. “But if you had the gung-ho attitude or willingness to do it – to enter a trade – you could.

“I never would have thought back in high school that I was going to be a sawfiler or working in a sawmill, but it’s pretty cool and I’m so glad I did it!” she continues. “It always interests me to find out that there are more females becoming part of this and other trades. Because really, there’s no reason why we can’t do it, and especially with new technology that’s made it easier for us now.”

Automation
When it comes to technology, Milburn believes that increased automation to replace the physical work in the filing room is beneficial, but can be cost prohibitive for many mills.

She also says that there’s only so much that can be automated in the filing room. To be completely automated, “you’d need to be set up like a car manufacturer, where everything’s robotic. I don’t think that’s ever going to happen in our industry,” she says.

“When we were going to school, we were sometimes fearful because we thought, ‘Oh, they can automate everything to replace the filer.’ But at the end of the day, a machine can only do so much. You need that human person to do fine detail. You’ll always need that filer.” 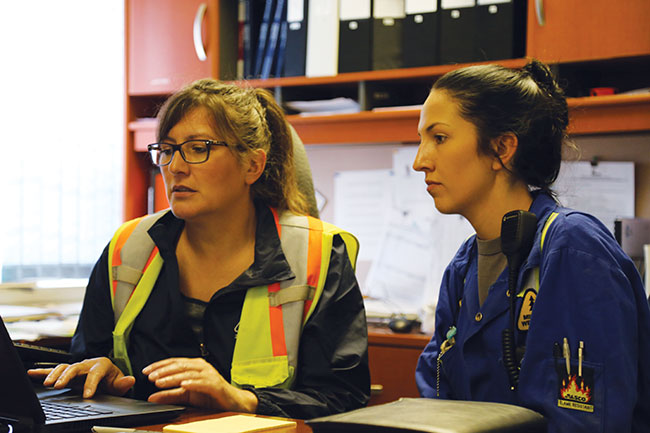 Education and safety
With technology playing an increasingly important role, filers also need to be educated on theory and new equipment. Milburn notes that attending sawfiler conferences is a great way to learn about new technology and to network with other filers.

“It was amazing the first time I went to the B.C. Saw Filer’s Association Conference,” she says. “I didn’t realize until I went there that our trade was that big.”

But there isn’t a lot of opportunity for formal education in this trade. The program Milburn took to become a sawfiler is no longer offered at BCIT, but is offered in Williams Lake at Thompson Rivers University.

“It’s beneficial to send the new generation to school, teach them the theory, then have them come back with that knowledge and put it to work,” says Milburn.

A key part of a sawfiler’s education today is safety. For Milburn, this has always been top of mind. Now, as loss control co-ordinator for Millar Western’s Whitecourt sawmill, it plays a major role in her life.

But how did she transition from sawfiler to head of safety? After about 20 years at the company, 16 as a sawfiler, Milburn began thinking, “I’ve kind of conquered this. I was ready for a change.”

When Millar Western posted a new job in the company’s stores, Milburn applied for the position and got the job.

After she had been in that position for a couple of years, Millar Western invited employees to apply for the safety role, and, given Milburn’s previous interest in safety, she immediately applied. She started in the role in summer 2012, and, with support from Millar Western, just finished her safety certificate from the University of Alberta. 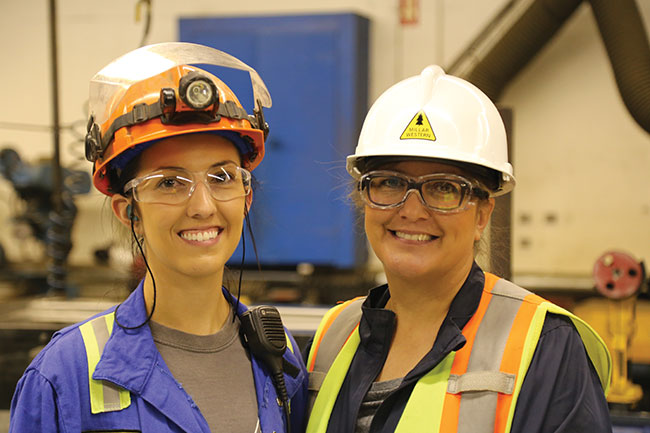 A family affair
Milburn says being in her current position is extremely rewarding, not only because she helps ensure the safety of all her Millar Western co-workers, but also because she can work with her daughter as part of the safety committee.

“It’s kind of neat to see her on the job – I’m really proud of the work Brittany has done to become an electrician, and even prouder of her commitment to safety. As a parent, you’re always fearful of your kid going to work and it’s comforting to see her working in a company that takes safety so seriously.”

The forest industry is truly a family affair for Milburn. Her husband, Jerry – whom she met at Millar Western – is head electrician at the company’s Fox Creek division. She also worked with her son, Cole, when he did a summer internship at the company.

Looking back at her career so far, “It definitely has been an experience,” Milburn says. “I’m pretty proud of where I started and what I did, from not knowing what I wanted to do after graduation to having a few things under my belt today. Becoming a journeyman sawfiler is an accomplishment that I am most proud of, from not having a clue what filers did to becoming part of the team. Now I know some secrets of the trade and being a part of that has been an amazing experience.”

Editor’s Note: We believe Stephanie Milburn is the first female journeyman sawfiler in Canada based on available information. If this is not the case, please send a letter to the editor at ecools@annexbusinessmedia.com.

Related
Welcome to File Week 2019!
‘The trade is evolving’: speakers talk automation at 2019 BC Saw Filers
Saw Filing 101: Open letter to a new saw filing apprentice
There and back again: A sawfiler’s journey