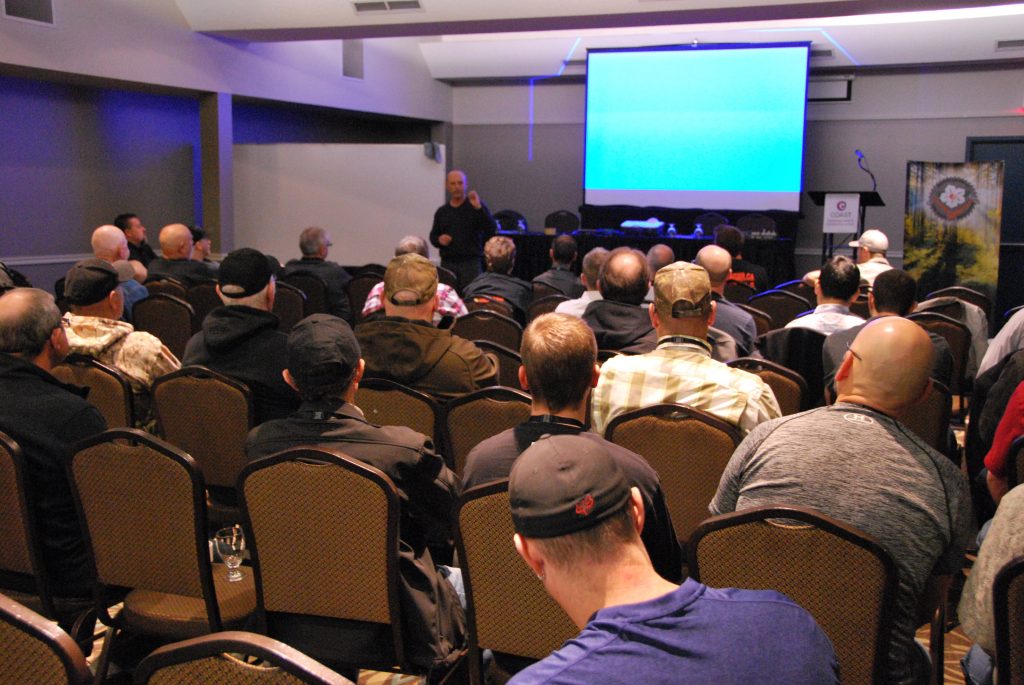 Brian Shale, Tolko’s maintenance leader and keynote at the B.C. Saw Filers Association 2019 convention last week, began his talk with a challenge: “I challenge you to get outside the filing room.”

“Everybody looks at automation and thinks, ‘Oh God, I’m out of the job.’ But you have to educate and reinvent yourself,” Shale said. And that goes for sawfilers, too. “You can evolve out the [filing room] door to become craftsmen in machine health management, participating with the operations guys,” he told the room of filers.

The sawfiler job isn’t going anywhere, “we can’t lose the knowledge you guys have,” but it is demanding filers learn new skills in addition to their basic trade, Shale said.

Shale’s message was a fitting start to the day of speaker sessions on Day 3 of this year’s convention in Kamloops, B.C., which followed two days of tradeshow where many manufacturers debuted new automated technologies and some reinventions of conventional products. Read about the products that caught our eye here.

Some of the industry 4.0 offerings were discussed in great detail during the sessions.

Precision Machinery’s Josh Bergen spoke about the company’s new saw temperature sensor, which is integrated directly into the saw guide to continuously monitor the health of the saws. By monitoring the saw temperature filers can predict failures and optimize water and oil usage. . (Watch a video of Bergen explaining the technology here.)

Saw-ADD’s Warren and Virginia Myrfield also presented on the latest results of testing the new anti-deviation device for round saws at Interfor’s Adam’s Lake sawmill. The device uses force sensors on the saw arbours to slow or speed the feed as required.

The result is average feed speeds 3.8 per cent faster than without the Saw-ADD device, according to Interfor head filer Marty Vatkin. Payback for the device was just six months, he said. 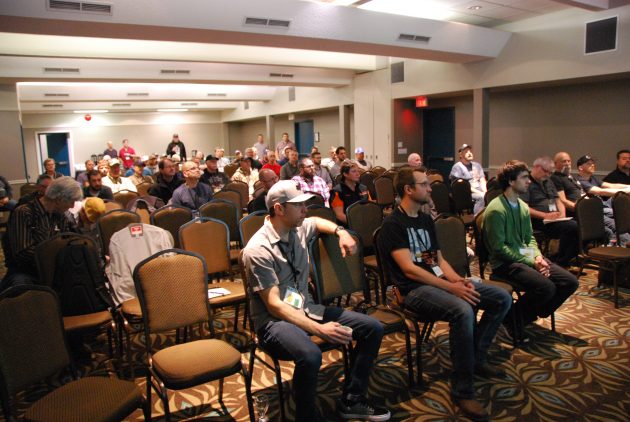 “Sawmills spend big bucks on optimization, but in the mill the machine centre isn’t properly aligned, so it’s not being used to the best of it’s abilities,” Addington said. “Whatever you use for alignment, just do it. It’s too often an overlooked or pushed aside aspect of our trade.”

Sawfiler instructor Tony Narciso ended off the day with an update of the Williams Lake saw filing training centre, run by Thompson Rivers University. The centre has held eight classes since it started up in 2013.

But there are still some challenges when it comes to recruiting new filers to the programs, Narciso said. For one, people can’t walk of the street into the saw filing school. The program requires 1,620 hours of filing room experience before you can apply for the Level 1 class – that’s about a year of steady work.

“You can’t learn filing from a book; you have to have the practical training before you can enrol. Then it takes three years minimum to complete the training,” Narciso explained. “It’s difficult, and one of the reasons we have a shortage, but it’s a good process.”

The school has a 90 per cent pass success rate with B.C.’s Industry Training Authority, which Narciso says is a positive sign. The four-week courses of levels one, two and three are held every spring and fall. Learn more at www.tru.ca/williamslake.