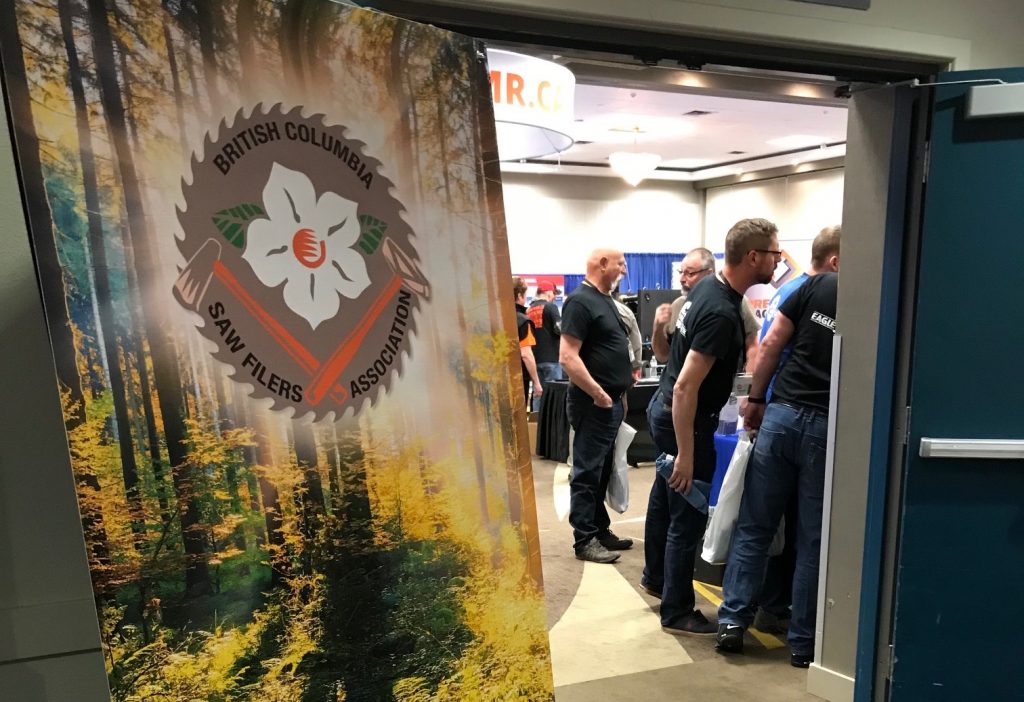 If the BC Saw Filers Association annual trade show is any indication – and we know it is – filing rooms are becoming more and more automated with new technology aimed at prolonging saw life and improving accuracy.

Filing room manufacturers are also stepping up to rethink conventional systems and parts.

Here’s a look at some of the new tech on display at the association’s annual trade show held last week in Kamloops, B.C.

Graphite saw guide pads
James Wankel, Simonds International’s vice-president of technology in charge of R&D, called this innovation the biggest thing to happen in saw filing in years. Burton Saw, a division of Simonds, introduced graphite saw guide pads as an alternative to conventional nickel babbitt saw guides. The graphite pads are long wearing and friction reducing, and use a new water flow modelling technology with patented damming channels to extend wear life and improve saw cutting accuracy. They are light-weight thanks to their fibre-reinforced material, and are designed to leave a small film of oil on the saw. Wankel said the comparison when it comes to labour costs and downtime is drastic between the new graphite pads and the nickel babbitt pads. The graphite pads are deep in the R&D process and already mills are expressing interest, he said.
www.simondsint.com

Contact temperature saw sensors harnesses IIoT
Williams & White’s debuted its SawSense Temperature Monitoring System at the BC Saw Filers trade show. The patented technology, developed in partnership with FPInnovations, accurately measures the temperature of saws using two contacted rim and eye sensors. The readings are transmitted over WIFI in real time for continuous monitoring. The technology allows for predictive maintenance, with an alarm system identifying performance issues in real time. The result is reduced oil consumption up to 40 per cent, decreases in saw deviation, higher chip quality and increased mill speed. Williams & White is presenting on the new technology at OptiSaw in Richmond, B.C., on June 13.
www.williamsandwhiteequipment.com

Saw-ADD takes on round saws
Saw-ADD introduced its new saw and guide force sensing system for circle saws at the show. The Round Saw-ADD measures the radial forces on the round saw blades from the tooth cut and the guide friction and, if excess forces are sensed, pre-emptively slows the feed speed to avoid deviation and saw damage.  Saw-ADD integrates force sensors on the saw arbors to sense the directional radial forces. These forces are detected nearly a half second before the arbor current increases which enables the feed speed to be reduced before sticking a cant, damaging saws or saw blade deviation. Round Saw-ADD is now running at Interfor, Adams Lake division on their Optimil 10-inch VDAG, producing better than expected results, with increased throughput of 12.6 per cent shift average cutting frozen Douglas fir.
www.saw-add.com

Automatic babbitt pad casting machine
Precision Machinery debuted its automatic babbitt pad maker at the show. The machine process is prompted through the HMI. Once started the machine brings the pot and die plate to temperature and begins moulding guide pads. The machine can be placed unsupervised in a ventilated room to reduce the hazards associated with fumes. Die plates can be changed, allowing the mill to produce pads for all guide centres with one machine. The entire automated process improves safety for all filing room staff, and eliminates the risk of steam explosions and fume inhalation.
www.pgmr.ca

CNC controlled levelling and tensioning centre
Newcomer to Canada, Thode Canada based in Chilliwack, is the Canadian distributor of Swiss-made Iseli sawfiling machinery line up, which they featured at the show. Thode Canada manager Phil Higgins highlighted the Iseli RZ 1, a fully automatic CNC controlled levelling and tensioning centre for band saw blades. The single-operation machine measures the entire blade using high-resolution sensors to level, tension and straighten in one go. The machine is fully enclosed and operated via touch screen monitor or a keyboard. VIDEO: Higgins details the Iseli RZ 1.
www.thodecanada.ca

Automated pitch removal
Supersaul Chemmex featured its Automated Pitch Prevention System at the tradeshow. Depending on your wood diet or climate, pitch build up on sawmill equipment can cause significant issues in a mill. If a log is not where the computer needs it to be it can reduce recovery, slow production and even damage equipment such as bandsaws. There are also safety concerns from manual pitch removal during maintenance times. Supersaul has developed a system that automatically introduces a solution to critical areas to remove the pitch and keep the equipment pitch free while the mill is running. VIDEO: Supersual’s Samuel Scheideman explains the pitch prevention system.
www.supersaulchemmex.com

Automated bench shows real-time saw conditions
Simonds International had its 095 AB automated bench on display at the trade show. The machine features an industrial touch screen with several interactive menus that show real-time results of the condition of the saw, which can be compared to a set standard. For tension changes, operators then enter a new value and the machine will measure the exact tension of the saw, allowing filers to produce a consistent saw. Selecting the gauge of the saw from a drop-down menu sets thickness of the blade. A newly integrated roller ramp makes it easy for one person to load a saw. VIDEO: Dave Purinton, vice-president of marketing for Simonds, outlines the features of the 095 AB.
www.simondsint.com

Enclosures built with filers in mind
Corbilt and Wrangler Engineering featured its fugitive dust containment systems at the show, which are designed with sawfilers in mind. The group of companies designs and manufactures bandmill enclosures, pickup systems for trimmers, edgers or any breakdown or residual equipment. The company focuses on capturing fugitive materials at the source, where the tooth exists the wood, says owner and president Cory Martindale. The systems control the sawdust while allowing filers and maintenance staff to perform their work easily and effectively.
www.corbilt.com

Laser tip sorting system
HMT Machine Tools Canada’s booth at the show featured the latest updates to the Gerling Sawmaster automatic tipping machine. The machine is designed for automatic brazing of pre-tinned carbide and stellite tips onto circular saw bodies for the primary wood industry. The Sawmaster is now outfitted with a laser tip sorting system that has allowed for faster

setup times and a more reliable method of sorting tips.  With a simple teach function you can setup the machine to sort standard and V top tips with ease.  This allows for about a five-minute changeover from one size tip and saw plate to a completely different size tip and saw. Watch a VIDEO of the sorting system here.
www.hmtcanada.ca

Armstrong releases ShapeUp Pro
Armstrong introduced its brand new ShapeUp Pro grinding wheel truing and shaping attachment at the BC Saw Filers Association trade show last week. The unit is the next iteration of Armstrong’s ShapeUp, which has been in sawmills for 40 years as an attachment for all Armstrong band and sash gang saw sharpeners. The unit features a template shape from your VariDesign tooth profile and #4 Cam sharpeners. The dresser disc is simply rotated to present a fresh cutting edge, and template release tabs allow for tool-free changes. VIDEO: Product manager Norm Brown outlines the features of the new unit.
www.simondsint.com