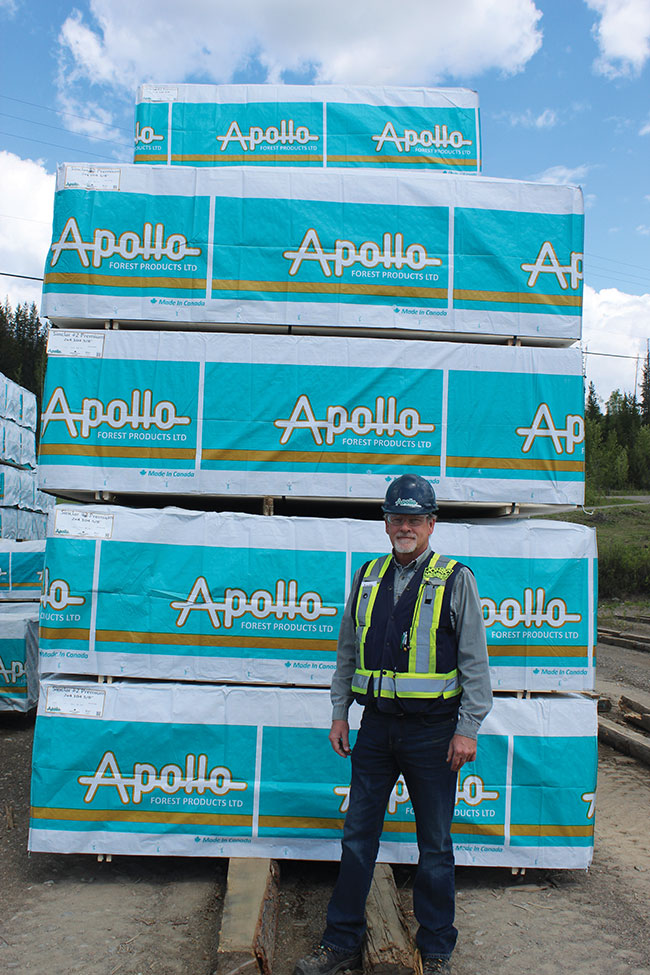 Not many sawmills can say they have weathered the industry’s ups and downs for over half a century, but Sinclar Group’s Apollo Forest Products can. The Fort St. James, B.C.-based mill celebrated its 50th anniversary last summer.

“As a business, we operate in a commodity market, and commodity markets are very competitive. So for Apollo to achieve 50 years is quite an accomplishment,” Sinclar Group general manager of lumber operations Dave Herzig tells CFI.

Apollo Forest Products started out producing railroad ties, Herzig says. But the tie market became difficult, so the company transformed the mill to produce products for the commodity market in 2004.

The mill’s agility and ability to transform along with the industry has helped it survive industry challenges. Although Apollo Forest Products took two weeks of downtime in August 2019 due to high log costs and difficult market conditions, their long history and Sinclar Group’s community-focused model will help it come out on top of the current downturn in the B.C. forest industry.

“Sinclar operates in small regional areas; as a mid-sized company, we have a long history of being community-focused, and our goal is to continue this community focus,” Herzig says. 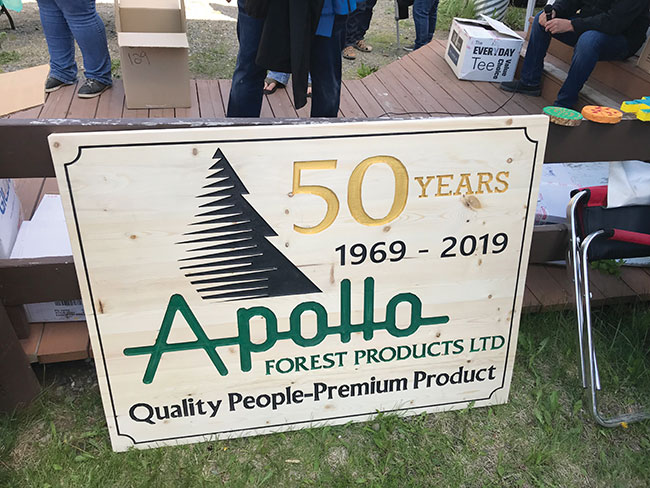 Logs are sourced from Apollo’s forest licence and purchased from the Fort St. James Community Forest, Nak’azdli and Tl’azt’en First Nation tenures, local woodlots and BC Timber Sales. The wood is harvested by local contractors and the average log diameter is approximately 7.5 inches.

Apollo Forest Products produces around 140 mmbf annually. The mill manufactures two-inch and one-inch material for the commodity market, as well as specialty products for the construction industry. These products go to various markets.

“Sinclar’s markets are as diverse as the products we produce, with 15-25 per cent of our products sold into Asia (Japan, Taiwan, China), and 75-85 per cent destined to markets in Canada and the U.S.,” Herzig elaborates. 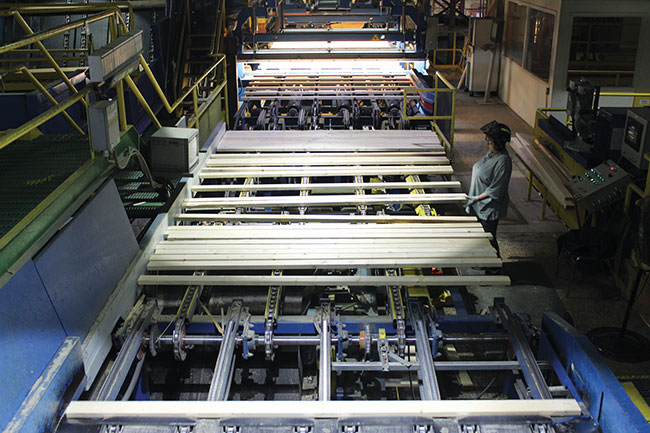 A railroad track runs through the mill to help transport products to the market. From the log yard, logs are put onto a deck and into a step feeder from Linden, purchased in 1989. They then go through a cut-off saw to trim them to the right length before being debarked through either a Nicholson or Cambio debarker.

“After being debarked, the logs go through a QM Industries slasher, which cuts them into eight or nine-foot blocks,” Herzig explains. “Once slashed, the blocks are scanned and sorted by diameter into two sorts – small or large.”

The small blocks are processed through the small log canter, where the sides are chipped off to make a cant; the cants then go to the Comact TBL2, a gang saw that cuts the cant into 2x4s or 2x6s. Cants that are too large are cut down to size go through twin saws.

“Large logs allow us to recover more product by producing sideboards off the sides, instead of chipping, and single or multiple cants. Sideboards are transferred to the edger, and cants are transferred to the TBL for further processing into products ranging from 1x3s to 2x6s,” Herzig says. “Occasionally, we process blocks that are too large for the canters; these larger blocks are processed through a bandsaw.”

The 2×4 and 2×6 products go through a trimmer before the 68-bin drop sorter. Once a bin is full, it travels by chain to a D02 stacker. Depending on the species and dimension, the bundle goes to the yard to air dry or through a Sultan or Wellons kiln.

“Dried lumber goes through a Wolftek feed table to a Yates planer, where it’s graded and trimmed to length, with a focus on grade, fibre recovery, and value. Once graded, it’s sorted, stacked, wrapped, and labelled before being shipped to our customers,” Herzig explains. 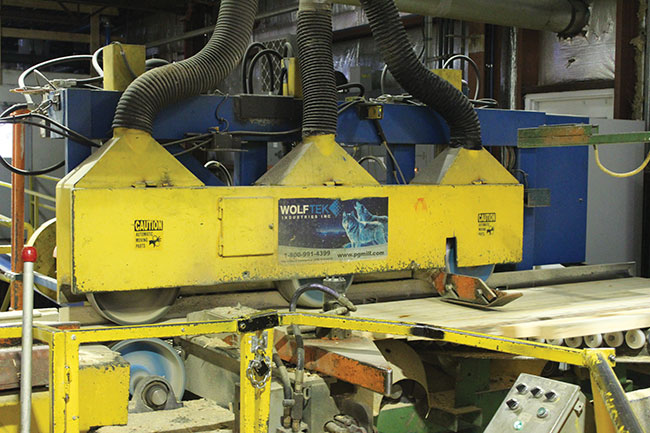 Dried lumber goes through a Wolftek feed table to a Yates planer, where it’s graded and trimmed to length.

Most of the mill’s equipment is Comact, which is part of BID Group. The sawmill’s scanning equipment comes from Comact or Porter, including a Comact EdgExpert. The planer mill features a FinScan transverse BoardMaster system, which was installed at the sorter in 2002 and then at the main line in 2005. The system helps optimize grading at the planer. The rest of the equipment comes from local suppliers or local machine shops. As Herzig explains, “sometimes it’s more effective and faster to utilize regional or local suppliers for equipment like conveyors and bins.

“As an organization, Sinclar is committed to utilizing the whole log. For example, Apollo’s hog fuel, sawdust, and dry chips are moved to Sinclar’s Nechako and Premium Pellet operations where the hog is used for heat and electricity production, and the sawdust and dry chips are used to produce pellets. Chips created in the production of lumber are sold to Canfor Pulp,” Herzig says.

“We still have opportunities to drive more value out of the parts of the fibre basket we currently don’t process and are exploring further opportunities,” he adds, hinting at future projects.

Apollo Forest Products has also been burning planer shavings to produce steam since the early 2000s, using an on-site 25 million BTU energy system and 16 million BTU system, both from DelTech.

Looking at the big picture

“Sinclar is looking towards the future, and has developed high-level capital plans for each of the operations; supporting our mission of enriching the communities we serve by being an environmentally, socially, and fiscally responsible leader,” Herzig says. “While markets are making capital investment difficult at the moment, we continue to invest in short-term projects that make good business sense.”

The company’s emphasis on using as much of the log as possible at their mills is partially due to the dwindling fibre supply and high fibre costs in the B.C. Interior.

“By spending wisely on investments that drive recovery, we can increase our output without increasing our fibre needs,” Herzig explains.

Herzig believes the Prince George timber supply area will decrease by five per cent in 2020, and it will shrink another five to 10 per cent the following year as a result of wildfires, the pine beetle, and now the impact of the spruce beetle.

“The forestry landscape will continue to change as a result of declining fibre supply, higher fibre cost, and legislative changes in B.C. like caribou habitat, the United Nations Declaration on the Rights of Indigenous Peoples, the Coast Forest Sector Revitalization Initiative, the Interior Forest Sector Renewal, and the Timber Harvesting Contract and Subcontract Regulation. While we believe the changes are positive and heading in the right direction, the unknown is how these changes will impact the industry over the next several years.

“There is no doubt the industry is entering a ‘new norm,’ and it remains to be seen how government, communities, First Nations, and businesses work together to find a balanced approach to the economic well-being that supports all parties,” he says.

But Herzig is optimistic that, despite the challenges ahead, Sinclar’s community-oriented model and resilience will ensure the business is a leading provider of integrated structural wood products.

The industry will grow and move forward, he adds.

“Wood is a sustainable building product, and with the changes to the B.C. Building Code and the 2020 National Building Code to allow for mass timber buildings up to 12 storeys, there is optimism.”