Thanks to its current capital expenditure program, the Vancouver, B.C.-based integrated forest products company has allocated approximately $39.5 million towards upgrades to the Canfor Radium Sawmill. These investments represent the first major component of a multi-year capital investment program aimed at enhancing productivity and cost performance in Canfor’s B.C. Southern Interior mill facilities and will include numerous projects, such as the building of a new planer mill, conversion of the energy plant from running on propane to bioenergy, along with sawmill upgrades.

The Radium project commenced in May 2012, explains Alistair Cook, Canfor’s senior vice president of wood products,  “We are moving rapidly with this project and we expect our Radium mill to be up and running again within a total of only six to seven months. The energy plant is on target for September completion, the planer mill upgrades will be ready in October, and the sawmill will be finished in November.”

The mill improvements will allow for a 20% increase in production over the facility’s historical numbers of approximately 200 million board feet, gleaned from the former three-shift basis.

“Our upgrade will ramp production up to 240 million board feet, with both the planer and sawmill running two shifts following completion of the upgrade project,” Cook says.

The upgrades are being handled by a set crew made up primarily of independent contractors that Canfor has relied on over the past several years, and which they anticipate using for any upcoming additional projects as well.

“The size of the crew fluctuates from a base of 20 to 30 people, upwards to as many as 90 who will be needed during the actual start-up phase, when the crew will be at its peak,” Cook explains.

The main contractor on the project is the Vanderhoof, B.C.-based BID Group of Companies, which has several divisions including Nechako Mechanical for fabrication work, and partner company, DelTech Manufacturing, who will oversee the biomass energy system installation.

A major portion of the $39.5 million capital expenditure budget is for the planer mill at $20 million; $9 million will go towards the energy system and kiln upgrades, with the remaining funds slated for the sawmill. The Radium mill has been completely shut down for the past three years.

“We went through a rigorous process in determining the upgrades needed at this specific site, beginning with a complete analysis of the fibre type available in the Kootenay region, and from that determining the best type of equipment needed to process it. Canfor has executed similar types of upgrades over the past two years – projects which we can now adapt for each new mill as we make improvements,” Cook adds.

Once the Radium mill is ready for start-up, mill flow will begin in the log yard where logs will arrive by truck before being sorted to length and then placed into inventory before moving to the cut-to-length sawmill infeed. Logs for the mill will be in 20-ft. and 16-ft. lengths. From the infeed, logs will go to the log-sort bins (pits) and then be fed into the debarkers.

Next in line is one of the small Comact primary breakdown line, the large Optimil canter line, or an older generic headrig line, depending on log size. Downstream, the sideboards will go to a Newnes (now USNR) edger. From there, the wood then heads into an older model sorter, and onto a brand new Prince George, B.C.-built SEC stacker.

As it leaves the sawmill, the lumber will be transported to the green yard where it will be loaded onto kiln carts. These carts will then be pushed into one of four new dry kilns. These kilns will be powered by Canfor’s brand new biomass energy system, which is being installed by DelTech Manufacturing, a primary manufacturer of biomass-fuelled energy systems for the forest sector.

Following kiln drying, the lumber heads to the planer mill. The major rebuild of the planer mill will incorporate a new infeed, a new high-speed Gilbert planer, a new trimline and a new stacker.

According to Comact, one of the project’s major suppliers, “The planer mill will house a Comact GradExpert line including a fence and 20-ft. trimmer, 20-ft. top sorter, and PLC for the 20-ft. and 14-ft. sorter lines.”

Following the planer lines the lumber is directed to a DelTech Auto paper wrap dispenser, where the lumber packages will be manually wrapped before being shipped.

The products leaving the mill will include dimensional lumber from 2x4 up to 2x10, in lengths ranging up to 20-ft., along with some Machine Stress Rated (MSR) lumber, used for projects such as trusses where specified engineered qualities are required. The planer mill will be adding an MSR system. MSR lumber was traditionally a staple of the central Interior region of B.C. prior to that region being significantly impacted by the mountain pine beetle epidemic. Ultimately, product from the Canfor Radium mill will be sold to Japan and other parts of Asia, in addition to North American markets.

“One of the biggest changes that will be realized at Canfor’s Radium mill is the vast improvement of our optimization system. No longer will it be handled by individuals, as everything will be fully optimized in both the planer as well as the sawmill, “ Cook says.

But what lies ahead in terms of challenges for this mill? The biggest challenge Cook sees is in recruitment – finding the right skilled people to run the mill. He says “We are recruiting today, and we are big on giving new opportunities to people within the company wherever we can.”

Once completed, Canfor’s Radium sawmill will employ nearly 170 people, and will have the potential of 170 indirect jobs in areas such as trucking and hauling.

“We are committed to building a very competitive facility with the world-class fibre from British Columbia, and we hope to provide long-term sustainable employment in the community of Radium. We are excited to get people back to work at this mill and keen to be involved in the community there,” Cook adds.

The infusion of this significant investiture into this small southeastern B.C. community is a welcome sign of better times to come. As for the soon-to-be-employed 170 employees and 170 indirect workers, they now have good reason to believe happy days are here again. 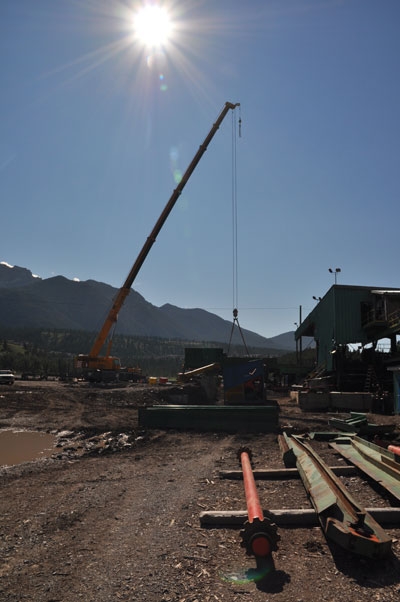