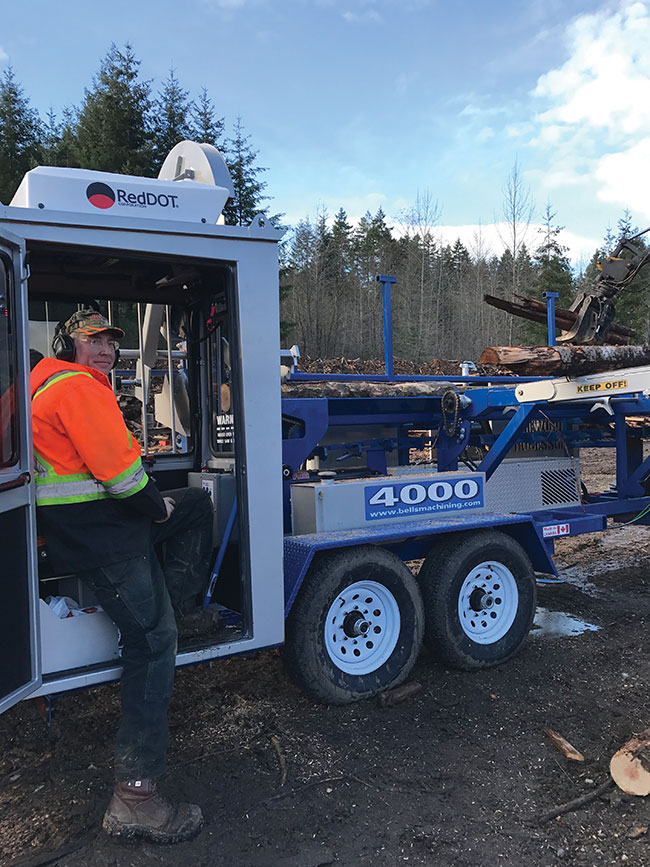 With the recent release of a new climate change report by the UN Intergovernmental Panel on Climate Change, many in the industry might be wondering what they can do to mitigate the impact of climate change.

Daniel Francoeur, owner and operator of Vancouver Island, B.C.-based Comox Valley Firewood (along with his wife, Chatrawee Sritip), believes he has discovered a way to make the industry more sustainable: salvaging wood from burn piles and turning it into firewood.

The company has been in the firewood business for 12 years, Francoeur says, starting as “just a chainsaw, a truck and an axe.”

Realizing the potential
However, in 2015, they began a salvaging operation, based in Courtenay, B.C., after signing a contract with a large B.C. logging company to salvage wood from the company’s burn piles for usable firewood. He pays a nominal fee in return for the wood, and also gets wood from a few other, smaller logging companies.

Since then, the couple has hired three employees and bought 1.2 hectares (three acres) of land on which they operate. One employee runs a John Deere excavator in the bush, taking apart the burn piles, while another runs the wood processor alongside Francoeur, and a truck driver moves the wood to the wood lot.

But the biggest change? Two years ago, Francoeur bought a wood processor that has almost doubled his production.

He purchased the processor “because the demand for the firewood locally grew bigger, and some of the smaller guys were getting out,” he explains.

“After the logging company opened the land for me, I had access to a fair amount of wood that was going to get burned. So instead of just burning it and wasting the wood – the biomass is huge – I started going after the burn pile with my excavator, which has got a grapple on it, and taking it apart,” Francoeur elaborates.

“I realized the potential that was sitting in front of the company,” he adds. “Then it was time to purchase the wood processor.”

A mechanized process
The processor is Bell’s Machining’s 4000 Series firewood processor, which has won awards at the Paul Bunyan Show two years in a row, according to Francoeur.

Made with a Cat motor and featuring an attached conveyor, the processor can be pulled behind a truck as needed, to move it around. 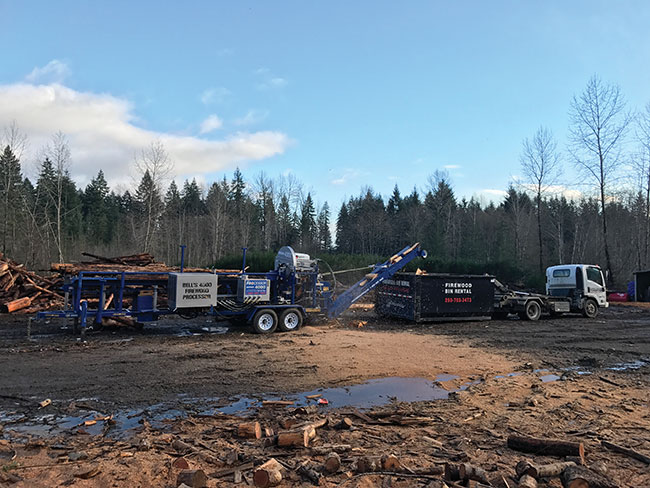 However, Francoeur has found the most efficient way of transporting wood is to keep the wood processor on his woodlot and bring his Isuzu bin truck to it.

“We put two bins side by side on the ground, and the conveyor, which is attached to the wood processor, moves right to left,” he explains. “So I load one bin, and we move it to the other side; we load the other bin.”

“The wood is not touched by humans anymore – it’s all mechanized,” he continues. “We’ve got a small skid steer from John Deere that loads the deck for the wood processor, and then the wood processor has an in-feed table, and a guy in the cab pushes a button, and the in-feed table feeds the saw. Then the wood gets cut, goes into a trough, and down there, there’s a splitter that splits all the wood. The wood gets pushed systematically to the conveyor, and from the conveyor to the bin.”

At the end, once the bin is full, Francoeur simply picks it up and puts it on the truck.

Consequently, the work is much more efficient and less tiring for him and his employees. And since they’re not as tired, they can produce more.

The processor requires a lot of maintenance, he admits.

“It’s wear and tear, right? The machine is working a lot of hours. It’s well-built, but it’s a different level of stress,” he elaborates. “Instead of stressing about tiring physically, you’ve got to be on top of it mechanically – change the oil and make sure everything’s safe.”

However, it’s “nothing we couldn’t handle,” Francoeur says, and the positives far outweigh the negatives.

Quality reigns supreme
In fact, thanks to this increased efficiency, Comox Valley Firewood will be producing over 1,000 cord this year – maybe even 1,200 cord of firewood, says Francoeur. 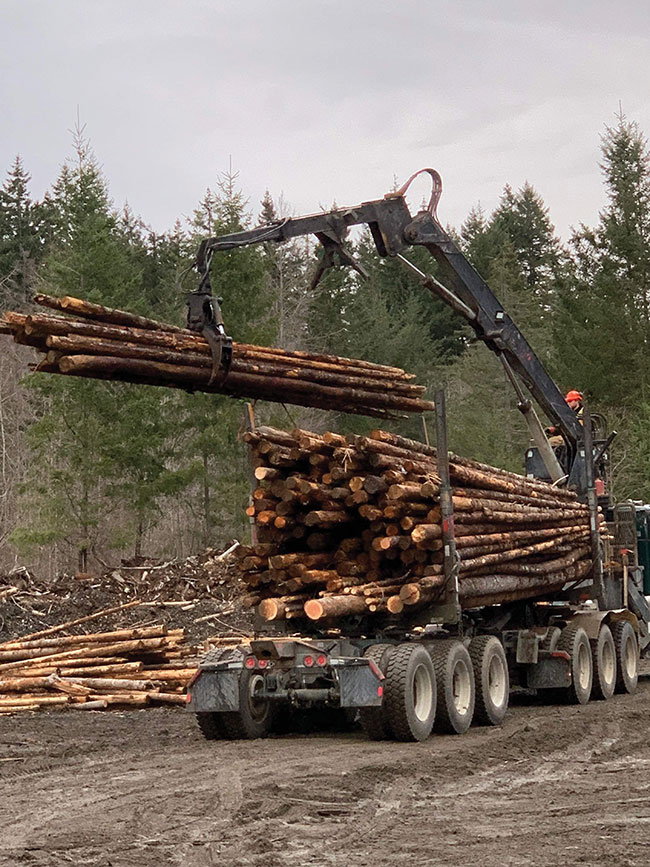 An operator loads logs onto a logging truck, to be moved to Comox Valley Firewood’s woodlot.

In comparison, before buying the processor, Comox Valley Firewood was producing 400 or 500 cord per year.

“I believe we are one of the biggest producers right now in British Columbia,” Francoeur says.

He expects to be able to pay for the excavator and processor within three to four years of operation, while also paying for his livelihood and his employees’ wages.

But who is driving this demand?

His customers are mainly local: local business people, homeowners and campgrounds (both provincial and private).

Yet it’s the quality of wood produced by the processor that has really driven demand in recent years.

“The product is the best, it’s all even, every piece that comes out of the wood processor is 15 inches or we do custom cuts, so every piece is the perfect length because of the way the machine is designed,” he explains.

Eventually, “Word came out about town, and the logging company let me season the wood on the land for one year. So all the wood is already pre-dried or pre-seasoned wood.”

“The wood is all even, so the people really like it, so we’ve gotten a lot more calls,” Francoeur continues. “I can barely handle my business right now. I’m getting 25 phone calls every day now for the last six weeks for firewood.”

What’s next?
To keep up with this demand, he will eventually hire more employees.

The same B.C.-based logging company has also offered Francoeur land further north on the island to set up the same business. But he hasn’t made his move yet.

“We’re just trying to find the right balance,” he says. “You go too big, you can lose everything.”

Before making any big changes, Francoeur wants to pay a few bills, he says, laughing.

But for him, one of the biggest payoffs is how the processor has helped him grow a sustainable operation and become an example for renewable operations in forestry.

“We’re really happy with preventing the waste of the wood, either rotting in the bush, or when we finish logging here, they put it in piles and burn it. So the biomass and the waste of our natural resources is minimized quite a bit now,” he says.

“I think that could be done in other places in Canada, too, because we all use firewood.”

“A lot of people want to say, ‘Oh, the industry shouldn’t be burning, they shouldn’t be wasting wood,’ but you’ve got to find a way to make money. So we finally found a niche here, in a way, that’s going to save a lot of that biomass,” he says. “Instead of burning all that debris at the end, we’re taking probably 50 per cent of it out of there, and salvaging it, cleaning wood and keeping people’s houses warm.”