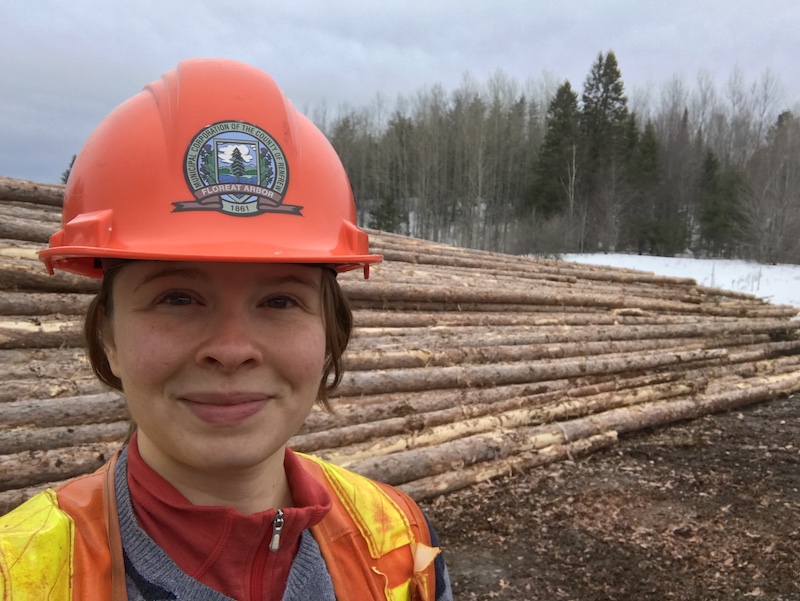 Lacey Rose is a forester for the County of Renfrew in Ontario. Raised in a northern mining town in Labrador, Lacey’s interest in the forest and wildlife led her to become a registered professional forester. Today, Lacey is a well-known advocate for the forest industry, doing education outreach and even hosting a YouTube video series called, “Mighty Jobs.” She is also the co-founder of Women in Wood, a networking group for women in the industry to share advice, information and encouragement.

When I was growing up, I didn’t even know what forestry was. So, it wasn’t really a career path that I saw myself taking. But, luckily, I had a biology teacher who recognized I liked to be outside and was interested in wildlife, and he asked if I had ever looked into forestry as a career. That’s when I looked into the program at the University of New Brunswick and it checked all of my boxes so I decided to take it. It was a five-year program and I got some cool summer jobs during that time, and I haven’t been unemployed a day since I graduated!

CFI: What is it about forestry that you enjoy?

I really love the people. I think it’s a really great community to be part of and the folks that I’ve met who have mentored me and taught me a lot of things along the way have been really great. I think that’s something that’s often overlooked about the sector, just how awesome the people are within it. I also love that every day is different and I continue to learn and see new things all the time, so it’s definitely not boring.

CFI: What is involved in your current role?

My current role is county forester for the County of Renfrew, and that means I manage about 6,500 hectares that’s owned by the county. We do everything in-house, so that means I’m out doing timber cruising, writing forest operation prescriptions, doing the tree marking, tendering the harvest sales, supervising the operations and doing any renewal work afterwards. I also do quite a bit of education outreach, which is pretty great.

CFI: Did you have any mentors that helped you out in your career?

There’s been a lot. I would say the most influential ones are the folks that took a chance on me when I didn’t have much experience. My first real forestry job was when I was still in university and a man named Chad Anderson hired me on a phone interview, sight unseen, to go work for him for Norbord in Cochrane, Ont. I had nothing on my resume at that point but he took a chance, and I worked my butt off, and I think I met all the expectations. He really helped me out after that as a reference and helping me further along in my career.

The first couple jobs I had, there were really great managers that hired me. Peter Nitschke was another really big one who hired me for a planning forester job with the Bancroft Minden Forest Company, where I wrote a forest management plan. He had more confidence in me than I had in myself at the time, and I think that was really helpful in helping me develop as a forester, and also be more confident putting my knowledge out there.

And then Jeff Muzzi was also a huge mentor to me. He was really patient with my thousands of questions working in the field, and he basically taught me all of my field skills. He really helped me develop that street cred that I needed to be a good operational forester.

CFI: As a woman, when you first started in the industry, did you find there were particular difficulties or challenges?

I don’t know if they were real or perceived for me. I didn’t really think about that or notice it at the time. I did have a hard time getting a first job while I was in school, and at the time I supposed it was because I didn’t have any experience, but looking back, face-to-face interviews didn’t really pan out for me for the first while. Obviously, I eventually got my foot in the door, and I worked hard at every job I had. I don’t know if I had to work harder because I am a woman.

But the one point that I could say is that when dealing with people who had never encountered a woman in my position before, sometimes I felt that I had to build up a level of trust before they would consider me a credible person. I think that they just weren’t used to having me around, and once they realized that I did bring the knowledge that was required, they were fully accepting. So, I’ve been really lucky in my whole career to have really great relationships and I don’t feel that I’ve been disadvantaged at all.

“Illustrating the fact that women can and are doing all of these jobs in forestry I think has been pretty impactful for students and young women that might not have considered a career in forestry.”

CFI: You and Jessica Kaknevicius are the co-founders of Women in Wood. What led you to create this organization with Jessica?

Jess and I met literally because we were the only two women often in the room for meetings or conferences. We didn’t work together but we were kind of in the same network of different things, and people said, ‘Oh, you have to meet Jess!’ So, we met. Then for a couple of years we joked that we should start a rebuttal to the “Old Boys Club.” So, we started Women in Wood, basically as just a way to bring together other women that we knew or supposed were in the sector. But we just started it as a networking group, and it really grew into a lot more than that. We realized pretty quickly that there was a real need and want for that kind of networking with women in the industry. And we really were not expecting for it to unfold the way that it did.

CFI: Women in Wood recently celebrated its fifth anniversary. What are some key takeaways from the past five years?

I think that we’ve learned that there’s a lot of power from having a good network. And also, illustrating the fact that women can and are doing all of these jobs in forestry I think has been pretty impactful for students and young women that might not have considered a career in forestry. That’s been the most rewarding part for me, when I hear from a young woman. I just got an email from someone saying “Oh, I just enrolled in the Masters in Forestry program at UBC because of the advice, information and encouragement I got from the Women in Wood group.” So, that’s a big win, I think, and that’s what it’s about, is just encouraging other women to join us.

CFI: Do you have any advice to share with women interested in a career as a forester?

The opportunities are there. It’s a really great time to choose a career in forestry. I think the most important thing is to set yourself up with good mentors, and to me, that’s been the most important part of my career – having those people who taught me, encouraged me and advocated for me. If you can find those folks, then you’re good to go. But also, hard work pays off, and if you’re someone who really loves what you’re doing, it won’t ever feel like work.

Related
Driving business: Q&A with log truck owner-operator Tiara Seitz
#EachforEqual: everyone has a role in supporting women in forestry
Women in Wood cutting down stereotypes
The CFI Podcast: Tanya Wick on women in forestry