Dec. 18, 2013 - Daryl Stastook is confident that a recent investment in optimized planer mill technology will pay off as expected.

Daryl is mill manager at Foothills Forest Products in Grande Cache. Nestled against the Rockies in northwestern Alberta, the Foothills mill was mothballed by Weyerhaeuser as that company reduced its role in Canadian forestry last decade. It was then acquired by C&C Wood Products of Quesnel, B.C., which has run it ever since. It produces 100 million board feet of SPF dimension lumber annually on two HewSaw lines installed by Weyerhaeuser in the mid ’90s – an R250 A.1 with moveable saw centre line handling logs to 20.5 inches, and an R200 A.1 with moveable saw assembly handling logs to 13.5 inches.

As the market recovers, mill management has been looking for ways to improve the bottom line. As is the case at many mills, optimized grading seemed a good place to start. In late September the mill started its revamped line, which includes a VAB linear grade optimizer handling both geometric and visual defects, as well as upgrades to some lumber handling equipment.

The project included rebuilding and upgrading an existing non-functional fence, including replacing simple cylinders with servomotors. This replaced a simple two-foot trim system with an optimized four-inch live fence. The project also saw the removal of two manual grade stations, including board turners. The entire upgrade, including VAB optimizer and displays, DO2 controls, and mechanical modifications, was managed by Wolftek Industries out of Prince George, B.C.

When Canadian Forest Industries caught up with Stastook in late October, he was not disappointed with the early results.

“We’re still playing with the system, so I’m sure we’ll see changes, but trim loss has been reduced by over 50 per cent. Our J-grade production, which is our best value, jumped from two per cent to as high as seven per cent, which obviously makes a big difference.”

Stastook also notes that overall planer mill throughput has been increased from the new smoother flow, an unexpected bonus.

“We were using board turners, which were responsible for over 40 per cent of the jam ups or slowdowns on the line. With the changes we’re seeing 30 per cent more throughput so far.”

Stastook describes the initial startup as flawless, with the system simply running as billed for the first two weeks. He adds that they have since been working on a few normal startup adjustments. “It’s been a good startup overall. I can’t say enough about the support, relationships and involvement we’ve seen so far.”

The VAB optimizer handles all geometric defects as well as most visual, although Stastook says they still use a check grader to manage knots. “We knew going in that VAB was working on its knot module, and that one is being installed in another mill this fall. For now we need someone monitoring the line anyway, so we just make sure they’re a grader. They are not intervening on many pieces anyway.”

VAB president Jean Berubé told CFI that the first knot module is ready to be installed in the first client mill when the timing is right, definitely before Christmas. It uses the well-established tracheid effect (difference in the way light plays over defected wood material versus normal fibres) to capture visual defects, such as knots, grain distortion and slope of grain.

“It’s not a new concept and is based on proven technology,” he explains. “As a result, we’re expecting a smooth rollout starting with that first mill.” It will then be made available to VAB’s current client list as an add on.

Back at the Foothills mill, Stastook is happy with the extra production, higher grade outturn, and reduced staffing requirements with the existing system. 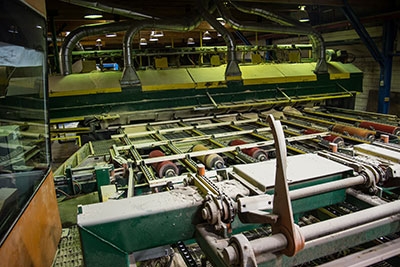 The project included upgrading an existing fence to servomotors. Removing the grading statins and board turners also rid the mill of a major lumber-handling headache. Daryl Stastook is confident that a recent investment in optimized planer mill technology will pay off as expected.
Print this page