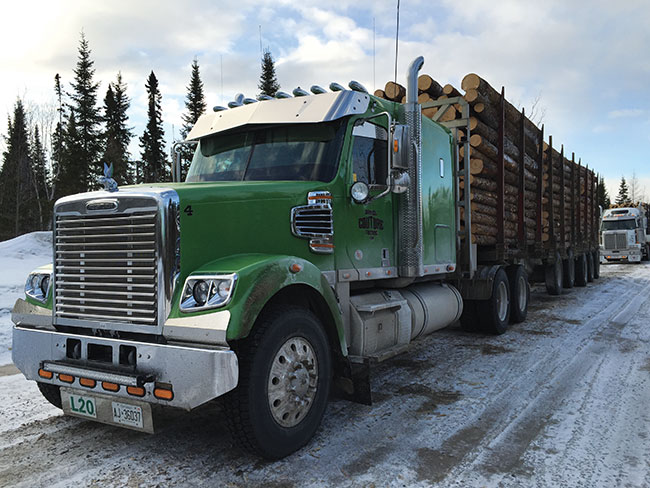 For years now, the forest industry has voiced concerns about a growing labour shortage, as more and more workers reach retirement age and fewer young people enter the sector to take their place. This shortage is particularly acute when it comes to finding truck drivers for log hauling.

To address this issue, multiple companies and organizations are testing the use of autonomous logging trucks. One such organization is the Nawiinginokiima Forest Management Corporation (NFMC), the Sustainable Forest License (SFL) holder for the Pic and White River Forest Management Units in Ontario.

The NFMC was formed in 2012, following the passing of the Ontario Forest Tenure Modernization Act in 2011, explains Carmelo Notarbartolo, general manager of the NFMC. Under the Act, the NFMC is considered a Local Forest Management Corporation.

The goal in establishing the NFMC was to provide economic support and development to the local communities, after many sawmills in the area shut down permanently in 2008 and 2009.

“There was a stop to basically any forest activities on the management area for a period of time,” Notarbartolo explains. “A working group was formed between the Ministry, the local communities, First Nations and industry to discuss a potential new tenure model to manage these areas that would try to provide local economic development opportunities while managing the forest.”

Sustainable management
Today, the NFMC is comprised of representatives from local and First Nations communities within the management area, along with representatives from local municipalities and ‘at-large’ members who provide expertise and support to the board of directors. The organization employs 13 people directly, and hires local contractors for harvesting and silviculture companies for reforestation work.

One of the NFMC’s goals is to manage the forest according to their forest management plan.

The majority of the trees that are harvested are SPF, although some poplar wood is also harvested for the Columbia Forest Products poplar veneer mill in Hearst, Ont.

Along with ensuring that the forest is sustainably managed, the organization generates revenues from the forest that they invest in local communities through various initiatives.

Testing technology
“In addition to that, we’ve also been looking at assisting the forest industry in any way possible using our revenues to try and make them more competitive or give them access to some new technology and ideas by being a pilot project. That’s where the idea of the autonomous vehicles came from,” Notarbartolo says.

The NFMC, like other forestry companies across Canada, is worried about the lack of log truck drivers. The shortage has meant that more logs are left at the side of roads for much longer than the NFMC would like, Notarbartolo says.

“We’ve tried fixing the issue through human resources – providing training, attempting to hire individuals to fill the positions – but it seems that the new generation just isn’t interested in that type of work,” he says.

“The truckers that we have left are older. They’re close to retirement age – some are past retirement age – and we’re worried that we’ll be unable to fill the seats with younger people,” he adds.

Consequently, the NFMC began to look at other options. They learned that other countries, such as Sweden and Finland, have been testing the use of autonomous trucks in the forest industry. So, last year, the company issued a request for proposal to find a Canadian company who would consider partnering with them to test the concept.

Provectus Robotics Solutions, based in Ottawa, responded to this request. The company will be providing the software and hardware technology for a pilot project testing the use of autonomous logging trucks.

“It’s a convoy of three vehicles, where the lead vehicle, through hardware and software, also controls the second and third vehicle in the convoy. If that is successful, then stage three would include using three full log trucks going into the bush, being loaded with roundwood and hauled to one of our local mills,” he elaborates.

In each stage of the trial, there will be drivers in the second and third trucks as a safety precaution. However, the intent is for those drivers to be hands off and allow the lead vehicle to control their trucks, Notarbartolo says.

All of the testing will be done in a closed environment on bush roads to ensure that the public is protected.

“The vehicles are going to look the same as any transport truck,” Notarbartolo adds. “They’re not going to look any different to the general public. It’s essentially buying new, current transport trucks and installing hardware and software in them that allows them to talk to each other.”

Improving competitiveness
If the pilot project proves successful, the impact will be substantial. It’s likely that truck drivers would need to be trained to use the technology, although it’s not yet known what that type of training would look like.

Notarbartolo believes that other sawmills and forest management companies should look into autonomous trucks as a possible solution to the driver shortage.

“I’ve already received calls from mills outside of our management area interested in how the project turns out, and possibly even coming on site when we do stage three of the project,” he says.

Implementing this type of technology will require capital investment from mills to buy the trucks, as well as the hardware and software that will go into those vehicles.

But, Notarbartolo hopes that in the future, the industry will use not only autonomous log trucks, but also autonomous harvesters, in an effort to boost productivity and combat the labour shortage in this area as well. In fact, the NFMC might turn its attention to testing autonomous harvesting once the current pilot project is finished, he says.

When it comes to the future of the NFMC, Notarbartolo says the organization will continue to find new and creative ways to make their mills more competitive in the world market.