Features Mills Sawmilling
‘We had to rebuild the trust’: How the BC Saw Filers Association got back on track

March 31, 2017 - It wasn’t that long ago that the BC Saw Filers Association was struggling to keep its membership. To be honest, things were looking bleak. But over the past six years, the organization has been in a rebuilding process and things have improved significantly; thanks largely to the hard work of a small but diligent group of filers. 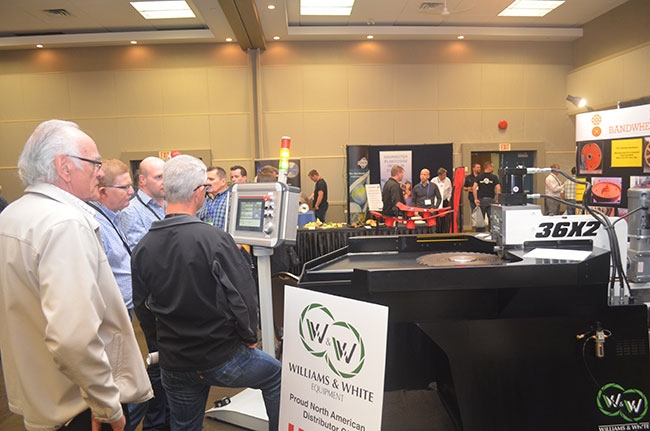 “For the last six years there’s been a succession of people working to build it up again,” says Trevor Shpeley, financial secretary for the BC Saw Filers Association and saw filer for Kalesnikoff Lumber in Castlegar, B.C. “Counting associates we’re getting 250 to 260 people at the annual conference… the association is definitely back on track.”

In its heyday, the BC Saw Filers Association’s annual conference and trade show was once known across the industry as the event to attend. Shpeley hopes to see the association return to its glory days.

“Back in the day, the filing AGM and tradeshow was the social event of the year for all the filers; people looked forward to it,” he says. “There was a big production, it was quite a thing; and the filing association did a lot better job representing the filers back then.”

Now that the membership is healthier again, one of the initiatives the association plans on tackling in the future is recreating its magazine, Point Up.

Although the magazine is high on the priority list for the association, there are several other initiatives it would like to tackle in the coming years. These include standardizing training for saw filers; trade-sponsored scholarships for students; and helping with the structuring of the trade in general. Shpeley adds that tacking issues like standardization of the trade could prove near impossible without the support of the majority of the filers.

“We have a pretty good voice,” Shpeley says. “I’d like to build it back to what it was before…the main goal is always to be a representative group for the trade.”

That said, one step at a time.

“We’re definitely still in the rebuilding phase,” Shpeley says. “Without having more people to be involved, it’s hard to take farther. We need to get more people involved.”