Workers take their time at Interfor’s Hammond Cedar Mill in Maple Ridge, B.C. The log mix is 100 per cent Western Red Cedar and it’s the largest cedar facility in the world. When working with these expensive giants, it pays to take the time to scrutinize each log.

Of all B.C. coastal tree species, cedar, and its products, create the most jobs per metre cubed and return the highest consistent prices. The region has approximately 20 sawmills that cut cedar and over 200 remanufactures working with cedar, but over the past decade, nearly 40 per cent of the remanufacturers have gone out of business. In 2014, remanufacturing cedar drives $1.6 billion in revenue and 3,100 jobs.

Located on the Fraser River in Maple Ridge, B.C., Hammond is on a 28-acre site that has housed an operating sawmill for over 105 years. The current mill was built in 1982 and acquired by Interfor in 1991.

The mill hosts three lines and a two-shift-rated capacity of 180 MMbf. When Canadian Forest Industries visited the site, however, it was running one shift to produce 86 MMbf with 151 workers at the mill and supporting 979 jobs in its Coastal Woodlands Division.

Interfor’s Coastal Woodlands Division supplies 80 to 90 per cent of the logs cut at Hammonds with the remaining fibre purchased on the open market. The Coastal Woodlands has two million m3 of Annual Allowable Cut of which 24 per cent is second growth. The species mix is Hemlock, Western Red Cedar, Douglas fir and spruce. The Western Red Cedar logs are sent to Hammonds while the Hemlock and Douglas fir go to Acorn sawmill or sold to competitors, traded or exported with the spruce.

It takes one year from the planning, harvesting and transporting of the logs by coastal waters to the Hammond mill for processing. “If we’re going to load a barge with logs, typically by the time we load the barge, it ends up at a dryland sort on the coast, you’re looking at about two weeks,” says John Straw, the Mill Manager.

Though the sawmill was set up in 1982, there haven’t been many improvements in the machinery and if the mill were to be rebuilt from the ground up, it wouldn’t be much different. “Because of the inherent nature of the cedar log and the products we make, a lot of our decisions are operator-knowledge based. We rely heavily on operator knowledge,” Straw clarified by email.

Interfor invested $6 million in capital investments in the sawmill in 2014; but the money was spent on supporting structures, scanning technology that increases the efficiency of how the lumber is measured and on improving the speed of the quad. The mill relies on USNR for most of its optimization. This includes the B-rig (which is a standard head rig), Quad maxi-mill, the main board edger and the trimmer scanner.

“We want to produce as much lumber as we can but the money is made in getting everything out of the log. You’ll see the sawyers turn the log, turn the log, so we work on that every day. You’re not going to see 500 feet a minute. You’re going to see a 1982 mill, but if we were to build a brand new mill, it would have the same basic equipment because this is the best way to break down a high quality log.”

Cedar is the most expensive species to log, and when it comes to cutting it, every log is different. Rot is inherent of Western Red Cedar but the logs are so big that the mill is able to trim it out and still extract high value products from the surrounding fibre.

“If you’ve got a really sound log on a rig, it’s a young log so there’s not necessarily a lot of clear in it – you’ll get a lot of knots,” says Straw. But the story is different on an older log even if the centre can’t be used. “Even though in the middle of the log the pith is rotted out, the value on the outside of that log is huge.”

Walking the floor, we come across some huge Flitches of clear wood. “This would be our highest value product. We’ll enter this back into the mill when we’ve got enough of it, turn it into 5/4x10.”

The Flitches will be sliced into 5/4 inch depths and sent to a remanufacturer in Washington State where it will be turned into siding to fetch a market price of $4,500 to $5,000 a thousand.

The journey through the mill
The logs are water-fed from the Fraser River and debarked on two older style Nicholson debarkers. Then they’re brought into the mill where they are sent to one of three lines: the A-rig is for logs that average 40 inches in diameter and larger, B-rig handles logs that range from 25 to 40 inches, while the quad prefers smaller ones that average between 14 to 15 inches.

The cants then go through the main breakdown number three flow. “This guy’s like traffic control at an airport – literally. He’s seeing wood from A-rig, B-rig and the quad and he’s sending it where it needs to go.”

On the day of the tour, the mill was processing 8x8s, 6x6s and some 6x12s. These may be sold out the door in that form or sold to remanufacturers. “Red cedar in a clear form is a beautiful wood. So you’ll see a lot of it on siding, a lot of it on decks, a lot of it on headers on decks.”

According to Straw, the market for 6x6 posts is a big market. But the mill will produce square posts from four inches up to 12 and anything in between from 8 to 20 feet long. These posts would often be used for decorative purposes.

Grade and value
Because the focus is on value and appearance, Hammond has four graders in the sawmill. Sixty to 65 per cent of the products shipped out of the mill are sold rough so it is important to have the product graded in the sawmill before it is shipped out. The graders are looking at the appearance of the lumber only. There’s an USNR optimizer that will grade the wane or for other defects. The graders put a mark on the wood, then it gets scanned by the optimizer that will scan the dimension and wane of each piece. The optimizer will determine where to make the cut to get the best value out of the product.

Once the piece goes through the optimizer, it is sent to the trim saws. A live fence positions it depending on where it needs to be trimmed so that it meets the required cuts from the right trim saws. There are 20 saws set up in one-foot increments.

The optimizer is calibrated twice a week and is checked daily. There are three quality control personnel who verify that the product is the highest grade possible and that the mill gets the highest return on each log processed. Each log that is processed is measured for thickness and deviations with all the data sent to a project logic control (PLC) interface. The data is processed and returned to the optimizer so that if there is a deviation, it will automatically be adjusted and corrected.

“I come from a dimension mill so after 18 years at dimension mills, it’s different to get used to extracting value versus production. Of course, we want to produce as much as we can and we want to lower our conversion costs but the main thing is value. It’s all about value.”

It’s that focus on value that informs the decisions at each step of the process. 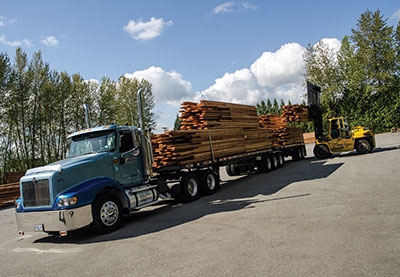 Sixty to 65 per cent of the products shipped out of the mill are sold rough so it is important to have the product graded in the sawmill before it is shipped out. Workers take their time at Interfor’s Hammond Cedar Mill in Maple Ridge
Print this page