Small Log Conference 2011
Sawmillers, loggers and biomass producers with an interest in small log processing converged on the lakeside city of Coeur D’Alene, Idaho, in late March for the Fifth Small Log Conference. Produced by the Montana Community Development Corporation, the event attracted approximately 175 attendees who heard presenters speak about a number of issues and topics, including forest health, the Mountain Pine Beetle epidemic, the challenges of harvesting and transporting biomass, and of course, small log processing.

Murray Hall, a fibre supply consultant from Duncan, B.C., on Vancouver Island, Loren Rose, the chief operating officer at Pyramid Mountain Lumber in Seeley Lake, Mont., and Mark Mathis, the president of Confluence Energy in Kremmling, Colo., made up the panel for the Pine Beetle discussion, which covered the challenges and the opportunities related to the beetle epidemic.

When it came to small log processing, the presenters included two Swedish sawmillers – Claes Backlund of Veisto Sverige AB in Sundsvall, Sweden, and Fredrik Nilsson of AB Karl Hedin in Kryblo, Sweden, Bruce Delicaet of Brudel Corporation in Bathurst N.B., and Mike Lipke of Turbo Wood in Newberg, Ore. The presenters discussed a number of topics from making the right investments when retooling your mill to the key ingredients needed to succeed in small log processing.

In addition to the presentations, the conference included a trade show where the latest technology advancements in forest harvesting, sawmilling, planers, scanning and optimization were showcased by some of the forest industry’s major equipment manufacturers, including Comact Equipment, Gilbert Products, HewSaw Machines, John Deere Forestry, Metriguard, Nicholson Manufacturing, Optimil Machinery, Porter Engineering, and USNR. HewSaw Machines was the Title Sponsor of the event, while Wastewood Recovery Systems and Rawlings Industrial were Gold Sponsors. Comact Equipment was a Silver Sponsor.
The next Small Log Conference will be held in the spring of 2013.

Wood Markets Conference
Many of the top executives from the forest industry were in Vancouver the week of May 9th for the Global Forest Products Leadership Summit 2011. The five-day series of events and conferences focused on the global pulp, paper, wood products and fibre-based packaging industries. The organizations participating in the Summit 2011, included the Pulp and Paper Products Council (PPPC), International WOOD MARKETS Group (IWM), PricewaterhouseCoopers (PwC), and the BC Bioenergy Network.

China was a major topic of discussion throughout the week, but especially during the IWM Global Wood Products Conference. Presenters, talked of a “super cycle” that is expected to include soaring lumber prices in a few years as North American timber supplies tighten in conjunction with rising Chinese and, eventually, U.S. demand.

However, the news wasn’t all good with presenters noting that in the short term things could still be challenging and that it may be the 2013 to 2015 period before prices really heat up. That’s when IWM says an imbalance in supply and demand created by increased consumption in Asia and improvements in the North America and European markets will create much higher log and lumber prices.

The Mountain Pine Beetle epidemic along with reduced harvests in Quebec and Ontario and the role of timber investment management organizations will all contribute to significant supply constraints in North America by mid decade, noted IWM.

When summarizing the comments from the speakers, IWM’s Russ Taylor said, “Every speaker mentioned or addressed the role of China as one of the major stimuli in increasing log exports and creating higher log and lumber prices. China’s growing appetite for logs and lumber will continue to increase exports from supplying countries around the world. As the U.S. and European markets start to significantly improve in 2013, the issue of which country will pay the highest price to get the wood appears inevitable; according to may speakers, there could be a collision course ahead.”

Lumber prices were also discussed in detail with most of the analysts and industry experts quizzed on the topic achieving estimates of $500 to $550 per thousand board feet within the next two to three years when the market peak was projected to occur.  They also predicted share prices of Canada’s major lumber producers would increase.

Another topic that drew a significant amount of interest at the IWM session was a talk on the state of the Russian forest industry. Gerry Van Leeuwen of IWM delivered the presentation, which covered the impact of the Siberian and Russian Far East log and lumber sector has on global markets. Recent news reports have eluded to a 40% increase in Russian softwood and hardwood log exports for the first few months of 2011 compared to the same time period in 2010, with most of the logs heading to China, Japan and Finland. However, Van Leeuwen disputed these numbers for China and Japan, noting that for the first three months of 2011, Russian log exports to China were only up by 2.7% when compared to the first three months of 2010, with only very small volumes being exported to Japan.

The IWM conference, which attracted about 200 attendees from 20 different countries, featured 11 individual speakers and another eight speakers that were part of two panel discussions that covered all continents in terms of major issues and trends impacting the supply, demand and trade of logs, lumber and other wood products.

McIntyre, who was the chair of this year’s conference and has been involved in the annual event since day one, said this was one of the best conferences yet. “The last few years have been challenging due to the circumstances the industry has been faced with, but we persevered and I think it has paid off.”

As with the previous day’s International WOOD MARKETS Group conference, almost all of the PwC presenters talked about Asia, and in particular, China. “As the solid wood side takes hold, we look to Asia,” McIntyre said. “This is an important emerging market for the industry moving forward.”

McIntyre said the industry’s return on capital employed (ROCE) provides evidence of improvements, noting that from 2009 to 2010, ROCE in the industry had done an about face. “For the Canadian industry, ROCE in 2009 was about negative 3%,” he explains. “While in 2010, our preliminary analysis shows that ROCE was close to positive 4%. It’s a major improvement, but the ROCE is still not where it needs to be as the cost of capital for the industry is in the neighborhood of 10 to 12%.”

Topics covered at the PwC conference included: fluctuating exchange rates, and in particular the impact of a stronger Canadian dollar and Euro against the U.S. dollar; emerging markets in addition to China, such as India; the lower cost structures of production facilities in South America; and the challenges of attracting employees to the forest industry as it is estimated that 50,000 people will leave or retire from the Canadian industry in the next decade. The presentations can be found on PwC’s website at: www.pwc.com/forestconf11.

The keynote speaker at the conference lunch was Hideki Ito, the Consul General of Japan in Vancouver. He made a presentation on the impacts of the recent Tohoku earthquake and the subsequent tsunami in Japan, and thanked a number of countries, companies and organizations, including several Canadian forest industry companies, for their help and support.

Following the success of this year’s “summit,” PwC’s McIntyre said the same participants have agreed to partner in a similar format for the next two years. “When we put on a one-day event, it is difficult for senior executives that have to travel some distance to justify the time commitment,” said McIntyre.“However, if we can offer more content, they get a much better return on their time and that was the strategy this year. We are very pleased with the outcome and all four conferences had outstanding attendance.”

Next year’s Summit will be held the week of May 7, 2012, and the venue will change to Vancouver’s Hyatt Regency Hotel.

Wood Composites and Veneer
Approximately 200 attendees and presenters from the United States, Canada and overseas came to Seattle, Wash. in early April for the 2011 Joint International Symposium on Wood Composites & Veneer Processing and Products.

In past years, the wood composites symposium has been put on by Washington State University’s (WSU) Composite Materials and Engineering Center, while a separate veneer conference held every two years was mainly organized by Canada’s FPInnovations. This year, the two events were combined and the WSU team was joined by FPInnovations and APA – the Engineered Wood Association, in putting on a larger symposium.

“Collaboration with our friends at both FPInnovations and APA – The Engineered Wood Association was tremendous,” said Robert Tichey, a research engineer at WSU and a co-chair of the event. “They were a great help in reaching out to a broader audience. We hope to have similar collaborations going forward.”

Chunping Dai, wood composites leader at FPInnovations Vancouver and a member of the 2011 joint symposium organizing committee, was also pleased with the outcome of the joint symposium.

“Because we attract many international participants to both symposiums, we wanted to make it easier for people coming from a distance by combining the two events,” he explains.

“It’s a great opportunity to share ideas and network with colleagues from all over the world,” adds Dai. “The product is now globalized and there are a number of common issues and challenges. It’s a great way to share information.”

Day One of the symposium, which was held at the Edgewater Hotel and Conference Center on the Seattle Waterfront, started midday with welcome speeches from co-chairs Tichey and Vikram Yadama, who is also from WSU. The Keynote address followed and was delivered by Alan Potter, the Vancouver, B.C.-based vice president of FPInnovations. Potter also presented later in the day, covering “Future Trends in Forest Products R&D,” where he discussed a number of initiatives, including multi-story wood frame building and other construction methods, green building, life cycle analysis, better use of small and low grade logs, and maximizing fibre value.

Another FPInnovations Vancouver-based speaker was Jennifer O’Connor. The group leader, energy and environment, provided an interesting talk on “Environmental Product Declarations: The Next Generation of Ecolabels.”

With more than 600 ecolabels worldwide, O’Connor told the audience the system is confusing for consumers and frustrating for suppliers. She also said the labels are usually non-transparent, meaning the buyers don’t see the data, and that they are non-comparable.

Environmental Product Declarations, or EPDs, are already happening in Europe and Asia and they are coming to North America, says O’Connor, and she adds  they offer transparent data, are comparable, life cycle based, non-judgmental, multi-criteria, standardized and when you put all of this together “they are a credible way to communicate environmental information about a product.”

Other speakers at the event included Craig Adair, director, market research at APA – The Engineered Wood Association. He discussed several topics, including the U.S. housing market and how it can get back on track. APA forecasts predict housing starts (single family and multifamily) will increase going forward with a peak at 1.5 million in 2014. The APA forecast then shows starts dropping again through 2016 before turning north and peaking again in 2019 at 1.875 million starts.

In addition to the main sessions, there was also a welcome reception on day one, a technical forum poster session and networking reception at the end of day two, and an optional tour with visits to APA in Tacoma, Wash., and FPInnovations in Vancouver, B.C. 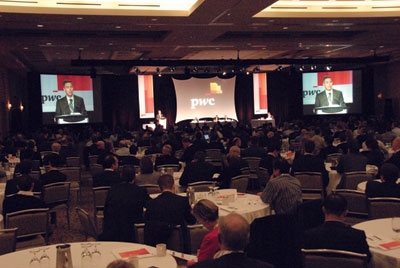