FPInnovations and partners Tolko Industries, Tsi Del Del Enterprises and San Jose Logging Ltd. are working to bring reliable high-speed internet to forest operations by as early as the spring. 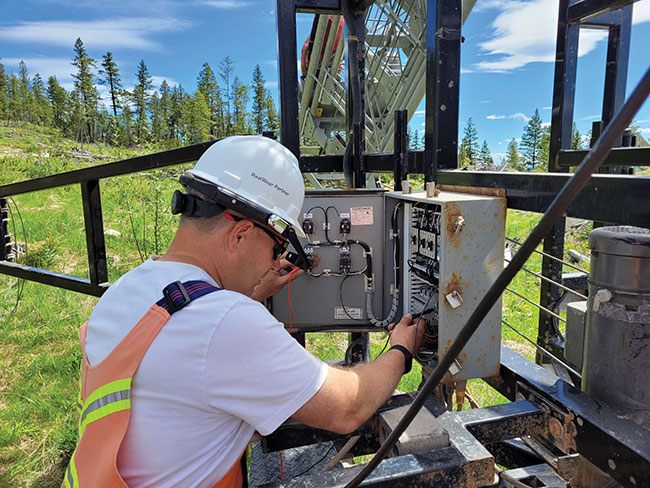 A few years ago, it seemed like bringing high-speed internet connectivity to remote parts of the forest was a pipe dream; one that wouldn’t come to fruition for another decade at least.

But that dream will soon be a reality. For the past three years, FPInnovations and its partners have been testing the use of mobile, private LTE networks in the forest. Based on the results of the latest trial, which took place in the winter of 2021 in the Williams Lake, B.C., area, in partnership with Tolko Industries, Tsi Del Del Enterprises and San Jose Logging Ltd., high-speed internet could be in the forest by springtime.

This will be a massive departure from the current information-sharing technology used in remote forests – namely, GEO-based satellite technology and very high frequency (VHF) radios, which is not enough for transferring large amounts of data back and forth, says Mithun Shetty, senior researcher for FPInnovations’ Transportation and Infrastructure group.

“The lack of connectivity in the forest prevents the timely flow of information between the forest and the data centre,” Shetty explains. “Currently, 60 per cent of operations are without cell coverage, so we cannot use the productivity tracking technology that’s being used in other sections, such as agriculture, in forest operations.”

Bringing mobile, private LTE networks to the forest will address these issues, in addition to improving worker safety in remote areas, he says.

“Also, the work we are doing can support Indigenous communities in remote areas, forest workers in remote camps, wildfire agencies, and others who are still unconnected and don’t have access to high-speed internet currently,” he adds. “The infrastructure implemented in forest operations could also be useful in the case of emergency response or natural disasters when the existing telecom infrastructure gets impacted.”

This project is part of FPInnovations’ larger Forestry 4.0 program, which is working to bring about the digital transformation of forestry. Tolko had also been working on a similar project for the past three years with two of their logging contractors: Tsi Del Del First Nation and San Jose Logging.

“Both of these contractors are already familiar with telematic devices. They were using the devices to help them in their business, and they were interested in this technology, so it seemed like a good fit,” Travis Kiel, Tolko’s manager, woodlands improvement, tells CFI.

Tolko then reached out to FPInnovations to partner on the project, as they “provided a depth of knowledge and additional resources,” Kiel says. San Jose Logging was brought on-board through FPInnovations’ Indigenous Forest Sector Technical Support program.

The companies first began testing the private LTE network technology in 2020, using a high-throughput GEO-based satellite backhaul. More recently, in the winter of 2021, they decided to test an LTE system with a new high-speed satellite backhaul, which has higher data speed and much lower latency, meaning shorter delays in sending the signal back and forth, Shetty explains.

For this trial, FPInnovations and Tolko partnered with technology providers to set up an LTE base station at the edge of a cut block. Tolko purchased its own 30-metre portable cell tower, which featured a five dbi gain omni-directional antenna on top, along with a tower-mounted amplifier (TMA) to increase signal strength for extended coverage. A satellite backhaul terminal connected the LTE system to the internet. 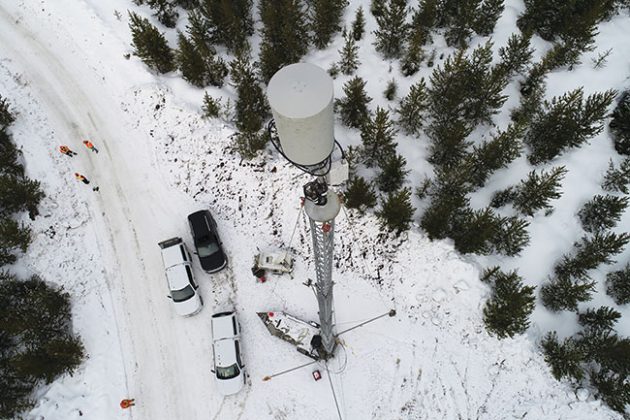 But how exactly does the LTE system work? LTE – long term evolution – technology follows 3rd Generation Partnership Project (3GPP) specifications for communications, which is the standard for providing network coverage for a large area, Shetty says. In this trial, one cell tower covered a 10-kilometre radius. Devices within this radius, including cell phones, tablets and telematics, can then communicate with the cell tower even while in motion.

For this to happen, “the LTE base station at the cell tower needs a microwave or satellite backhaul that connects the station to the internet,” Shetty says. “The microwave backhaul does not seem to be feasible, as it requires long-distance interlinks. The satellite backhaul is preferred as it improves the ease of deployment, skill level required, and cost.”

As part of the latest trials, San Jose Logging had its feller bunchers and skidders equipped with FPDats. The operators were given 10 phones, which were connected to the private LTE network, to use during the trial.

Overall, the trial was fairly successful, with the operators able to connect to the network on their devices, like a regular phone can surf the internet at 4G speed, Shetty says. The bandwidth and signal strength allowed for calls, texts, streaming video and accessing the internet.

“With a signal tower, we got the non-line-of-sight coverage to about ten kilometres and download data speed was more than 10 Mbps, which meets the requirements of advanced connectivity,” Shetty says. “The tested system was easy to deploy; forest field personnel could deploy this system with minimal training. And the system is portable, so it requires a smaller footprint for installation (depending on the height of the tower) and has low power requirements.”

The equipment operators and foremen were excited to see the data come in during the trial, Kiel adds.

“We were able to make phone calls and connect to the internet where no one really imagined we would be able to without satellite phones, which are inconsistent and not reliable,” he says. “We do still have some improvements to implement, and need to ensure the contractors see the true benefits of the data.”

As part of this trial, the partners used a Voice-over-IP app to make calls, which required some set-up that Shetty says might not be preferred for deploying the system in the future.

“One learning from this trail was to have a calling feature that uses the native dialer app,” he says. “For this feature, we would need telecom carriers’ support as this could be done with Voice-over-LTE-type technology.”

Another challenge was that the signal tower was set up off-site, upwards of ten kilometres away. While there were no big problems in terms of logging equipment interacting with the tower, there were some challenges when it came to the topography and logging equipment potentially going outside of the tower’s radius and line of sight, Kiel says.

Since the satellite backhaul is fixed to one location, it also meant the system could not move as easily as logging operations do, Shetty says. However, the satellite terminal will soon be mobile, which means the whole system will be able to move easily. 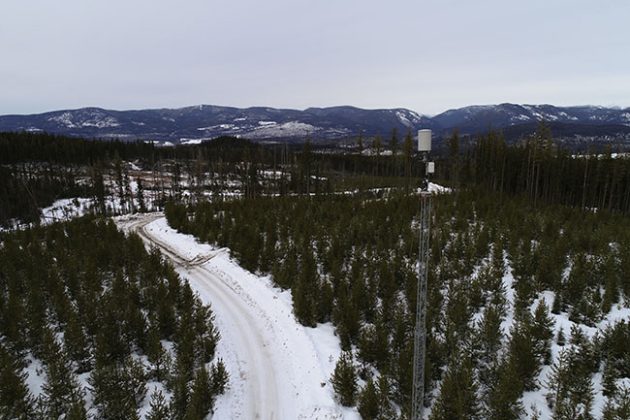 View of the cut block near the tower.

‘Revolution in our industry’

Ultimately, the private LTE networks will help advance the forest industry to have connectivity in remote areas, Shetty says.

Moving forward, FPInnovations and its partners are evaluating the long-term performance of the LTE system in different weather conditions.

“The system is almost ready; we’re just waiting for the satellite backhaul system to be mobile. It is expected to be mobile very soon, so we anticipate the loggers could use the whole system by spring of 2022,” he says. “To use the LTE system, they would need access to frequency, and we also have to make sure the devices they are using are certified.”

“Based on the expertise gained, as well as the network of partners we have developed, FPInnovations can now support our members to assess opportunities related to better connectivity, identify the best combination of technology, and guide the financial evaluation.”

Kiel adds that Tolko is very interested in using the technology once it is commercially available, and hopes that logging contractors will also see the benefits of the system.

“Much of the new tools and technology developed today are more reliable and are just better on the LTE network, compared to the satellite-based technology,” he says. “By having the real-time data, contractors can manage their equipment more efficiently – ordering parts, troubleshooting issues on equipment in the field can happen more quickly, rather than sending a mechanic out that didn’t bring the right part, for example.”

This type of technology “opens the doors to things like bringing automation to forest operations, for which advanced high-speed connectivity is a critical element,” Shetty adds.

“This is the right time to bring a revolution in our industry with the advanced connectivity.”