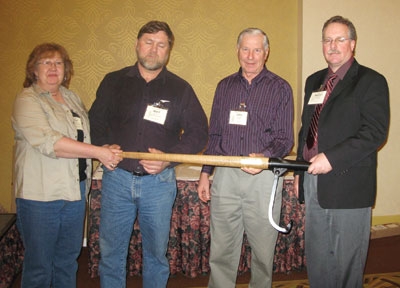 Regional Winners (left to right): Marilyn Leopold and Ward Weare were presented with the Peavey award by John Higgins from ALICA and Steve Mason Approximately 200 members of the forest industry descended on Moncton

“Attendance was probably down by about 25 per cent over last year but we still retained a good core group that represented a wide cross section of our members,” added Robichaud while noting that most attendees were “very realistic” about what is going on in the industry today. “Our members are of course not really happy about the current situation, but they realize this is a cyclical industry and many of them have been through this before. This particular round may be tougher than in the past, but looking forward we are all excited about the future, although it is with cautious optimism.”

Keynote speaker Peter Hall, vice president and chief economist with Export Development Canada (EDC), told the audience, “I’m not looking at sugar coating anything.” He went on to offer his opinion on what might be on the horizon for the next year or two saying there could be some positive signs in the economy by mid-2009, but he cautioned it would be mid-2010 before we might start to see improvements. His presentation covered numerous topics including currency values, markets in North America, Europe and Asia, and housing starts and inventory in the U.S.

Key Issues
Following the keynote address, a “for contractors roundtable” forum covered a number of relevant topics including key issues around harvesting, silviculture, road construction, trucking operations and equipment repair and maintenance. A concurrent moderated session aimed at the manufacturing side of the business covered topics such as creating value by innovation, the current pellet markets, and forest diversity and wood supply.

A number of other concurrent sessions were held over the next day-and-a-half with the Atlantic Outstanding Logging Contractor of the Year awards luncheon being one of the highlights. The awards were sponsored in part by Corner Brook Pulp and Paper Ltd., Wallace Equipment Ltd./John Deere and Atlantic Land Improvement Contractors Associations (ALICA). Based on the nominees received, the provincial winners were Noble’s Lumber Yard from Newfoundland and Ward Weare Logging from Nova Scotia with the latter selected as the overall winner.

“We try to run a number of sessions and events that will attract and interest people from all facets of our industry,” added Robichaud. “We always have a lot of interest in the contractors roundtable session as this is where everyone can share information and learn what their industry colleagues are doing. This year, it was also a great opportunity to find out about new technology, human resources issues, and data management, which can help our contractors learn how to compile and analyze data
and then use that data to make informed decisions.”

Attendee Comments
Steve Mason, woodlands manager for AbitibiBowater in Grand Falls –Windsor, Nfld. and now the past chair of the CWF after he passed on the role to Mike Shea at this year’s meeting, was pleased with the event. “Considering the tough economic times and the problems people had getting to Moncton because of poor weather, I was really pleased.  I think it was a well rounded meeting and I really liked the presentation by Peter Hall as it showed some light at the end of the tunnel.  I also  found Bryan McNamara’s presentation on ‘The Echo Boomers’ very interesting as this is something we are all going to be facing over the next few years as younger people joining our industry  have different expectations and views than someone who has been in the industry for a while.”

Neil Kenney of NR Kenney Logging Ltd. in Pictou County, N.S. and a CWF board member found the event useful, especially in light of the current economics. “It was good to get together with a bunch of guys in the industry that have the same problems and issues that I have and understand what we are going through,” he explained. “The sessions were also helpful as they provided the opportunity to learn about new equipment, share ideas, and pick up new information. It was well worth taking the time to go.”
In addition to the CWF events for members, the organization held its spring board meeting and annual general meeting. CWF has several events planned over the next year including an annual teachers tour that attracts 40 to 50 teachers to the woods for four days, the “Cutting Edge Dinner Series” which is in conjunction with FPInnovations and the Canadian Wood Fibre Centre, field trips and next year’s Spring Meeting, which will also be in Moncton and will coincide with the Atlantic Heavy Equipment Show in early April.