June 10, 2014 - The British Columbia forestry sector saw two dust explosions at sawmills in 2012, and in each explosion, two people were killed and others were injured. These terrible events spurred the creation of an industry-led Manufacturers Advisory Group (MAG), which has the goal of providing the industry with a better understanding of (and improved ability to manage the risks created by) combustible wood dust.

The MAG task force created an ‘auditable standard’ that can be used to provide independent assurance of mill safety, explains James Gorman, president and CEO of the B.C. Council of Forest Industries (COFI). A mill’s equipment, systems and processes are audited from a wood dust mitigation and control perspective – with input from employees, supervisors, management and others on site. The physical scope of the audit extends from raw material handling areas through to loading and shipping. It also includes the development of action plans and follow-up.

Early this year, B.C. government Minister Shirley Bond (Ministry of Jobs, Tourism and Skills Training and Minister Responsible for Labour) warned sawmill owners that they must comply with new dust control regulations or they will face consequences. The regulations (which the MAG auditable standard tool helps companies comply with) require that there be less than 1/8 inch of dust on no more than five per cent of any given work area.

The Minister’s actions were in response to a WorksafeBC report on dust safety in sawmills issued in February. Between November 2013 and January 2014, WorksafeBC inspected 144 mills and found that only 83 of them were in compliance with regulations at the time of inspection. A new round of inspections commenced in April.

Gorman notes that companies have had the MAG audit tool available to them since January to measure their own performance relative to dust control before a WorkSafeBC inspector arrives. However, sign-up for the tool has been poor so far: only 55 of 144 sawmills have signed up, and those 55 are all MAG members.

Gorman does not speculate as to why some companies have not yet adopted the tool. He notes that COFI is in the process of making sign-up a requirement for membership, but that there is: “a huge number of independent companies out there that don’t belong to associations.”

“Industry organizations like COFI are encouraging large and small operators across the province to fully commit to adopting the audit tool,” he explains. “MAG members – who represent about 75 per cent of lumber processing in B.C. – are also encouraging other companies to fully implement the tool in their operations, and some are extending it to their operations outside of Canada. We have made all of the associated materials available on the WorksafeBC website to anyone in the industry.” Gorman expects more companies to begin using the tool as the year progresses.

United front
On March 28, a meeting about dust safety was held in B.C. A cross-section of industry associations including COFI, some independent lumber manufacturers, organized labour representatives and WorkSafeBC staff met with Minister Bond as well as the Minister of Forest and Range to develop a joint work plan to ensure all companies meet the government’s dust control regulation.

A joint press release was issued afterwards, which Gorman considers important because it shows a united front from those in attendance. It states, “We had a frank and open discussion on sustainable compliance at this meeting and the result is an aggressive co-ordinated plan to accomplish a number of specific outcomes in the next 90 days.” For example, a team of technical experts established by industry and supported by WorkSafeBC will be created to help all mills with compliance.

Additionally, at organized labour’s request, the joint work plan includes a review of the MAG audit tool by all parties to evaluate it as an enforceable standard. WorkSafeBC has agreed to lead that analysis moving forward.

Sawmill employers, organized labour and WorkSafeBC will also launch an awareness campaign about the rights of workers to refuse unsafe work. A toolbox kit relating to this topic will be provided by WorkSafeBC to employers and health and safety representatives in all sawmills.

Inspections and compliance
Before the meeting on March 28th, we asked WorkSafeBC what strategies it is using to achieve regulatory compliance among sawmills, and how close it is to shutting down mills because they do not have adequate dust control. WorkSafeBC’s Senior Media Manager Trish Knight Chernecki directed us to a statement, which explains that “where prevention officers find issues that can cause an unsafe environment for workers, officers will educate and consult, and as necessary, write orders to oblige the employer to address those safety issues. As required, WorkSafeBC may also apply administrative penalties.”

As mentioned above, from November 2013 to January 2014, WorkSafeBC found that only 83 of the 144 inspected locations were in full compliance. The organization notes that many of those locations had dust control plans incorporating significant engineering controls to augment and mitigate the amount of manual dust cleanup required. Gorman confirms that sawmill companies have spent millions on better dust control since the tragedies in 2012.

Over the inspection period, WorkSafeBC handed out 93 orders related to combustible dust, most for unacceptable levels of dust accumulation outside normal production areas (for example, basements, crawl spaces, overhead areas, areas hidden behind motor control centres or cabinets and outside areas). The organization handed out 13 stop-work orders relating to unacceptable accumulations of secondary dust and other significant violations, which posed an immediate hazard to the health and safety of workers. However, WorkSafeBC states that: “In most cases, the areas noted were cleaned the same day, allowing production to resume by the next shift. These locations are subject to frequent ongoing inspections to ensure compliance is maintained while mill operators address the challenges noted.”

“Two locations inspected during the initiative received a second stop-work order and have been directed to participate in a closely-monitored compliance plan that includes weekly submissions to WorkSafeBC prevention officers regarding their dust management process. Officers are inspecting these locations at an increased frequency during this monitored phase to ensure the workplaces remain in compliance with WorkSafeBC requirements and expectations.”

There were 17 warning letters given out during this inspection phase. “Warning letters and penalties are tools used by officers, as necessary, to motivate certain employers to comply,” says WorkSafeBC.

As part of the ‘joint work plan’ created at the March 28th meeting, WorkSafeBC will double the size of the designated inspection team to 20 and launch further sawmill inspections (‘Phase 4’ of its inspection initiative in this sector). The focus of this phase will be on companies which have been found to be out of compliance, but all sawmills will be included.

In addition, WorkSafeBC will continue to review its Occupational Health and Safety Policy with a focus, at this stage, on high-risk violations and the consequences for non-compliance. The elements that can lead to a dust explosion will be included.

Gorman is positive about all that is happening in relation to dust in B.C.’s sawmills. “Government, industry, and safety authorities are working closely together to address the risk of combustible wood dust,” he says. “The necessary steps are being taken to achieve sustained compliance with the regulations.” 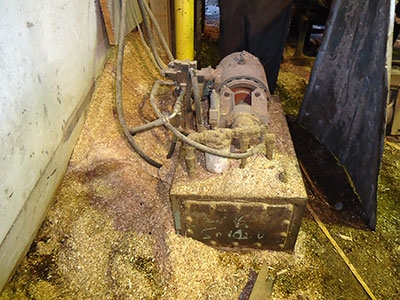