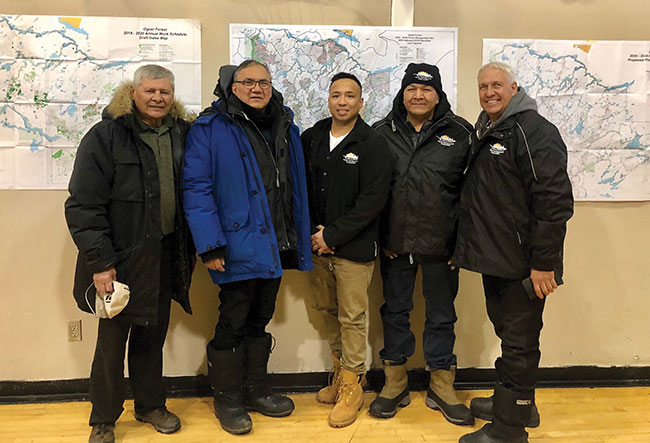 In northwestern Ontario, near the municipality of Greenstone, three First Nations are working together to increase Indigenous participation and ownership in the forest industry. The First Nations – Aroland, Eabametoong and Marten Falls – jointly own the Agoke Development Corporation (Agoke), which manages the Ogoki Forest.

The Ogoki Forest is located within the three First Nations’ traditional lands, but a sawmill held the Sustainable Forest License (SFL) for the area until 2008, when it went bankrupt. The license then reverted back to the Crown.

In 2011, the Ontario Ministry of Natural Resources and Forestry identified the Ogoki Forest as a priority unit for tenure modernization, explains Jason Rasevych, Agoke’s business advisor. At this point, the three First Nations were discussing the opportunities that forest management would bring their communities.

After consulting their respective communities about forest management, the venture’s Indigenous values and First Nations’ historic use of the Ogoki Forest, they decided to proceed with an SFL.

“A lot of the community members are familiar with the place called the Ogoki Forest – it’s really a sacred area for them, a place where they’ve gathered, hunted and fished since time immemorial. They wanted more say as stewards of the land,” Rasevych says.

So, in 2015, the three First Nations signed a co-operation agreement to work together on forest management and economic development in the area, officially creating the Agoke Development Corporation.

“The name Agoke came from a group of elders, and it is the true way of pronouncing Ogoki,” Rasevych explains. “Agoke, what it means in Ojibwe is ‘hidden land’ or ‘sacred land.’”

A success story
The next step for Agoke was developing a business plan and negotiating with the Ontario Ministry of Natural Resources (MNR) for a forest license.

In September 2017, the MNR approved of the plan and directed the Nipigon district MNR to negotiate an agreement with Agoke for a two-year interim forest resource license (FRL) for the Ogoki Forest. On April 1, 2018, Agoke started managing the Ogoki Forest.

In their negotiations with the MNR, one of the biggest challenges Agoke faced was identifying a market for the logs, Rasevych says.

To address this problem, between 2016 and 2018, the Agoke board met with consuming mills in the region. Ultimately, they signed a joint venture agreement with Nakina Lumber Inc. for the Nakina Sawmill in June 2018.

“This was the first time a group of First Nations or a First Nations entity had ever done anything like this, to be able to be a co-ordinator of wood fibre going into a sawmill,” Rasevych says.

The joint venture agreement included commitments to increase Indigenous participation in forestry, such as hiring at least 75 per cent Indigenous people to work in the mill. Today, the sawmill employs 85 people, and over 80 per cent are Indigenous, Rasevych says.

As a result, Aroland First Nation (which is approximately 10 kilometres from the sawmill) reduced its Ontario Works welfare program because so many community members began working at the sawmill.

“It started to become a success story for a lot of the families and a lot of the younger folks who have never held a job in their life,” Rasevych says. “It really was an awakening to the local First Nation community and it provided an economic boost to the municipality of Greenstone as well.”

“This is huge for the area because that hasn’t happened in the past,” Rasevych says.

In fact, when forestry operations were underway in the Ogoki Forest in the 2000s, the Indigenous people didn’t see much benefit, he says.

“They didn’t have access to opportunities as much; there were a lot of barriers to enter as either a contractor or, because of the union that was in place, at the local sawmill. They didn’t have much of a say in the forest management process,” he elaborates. “They were really minimized, and they took a back seat, and this was a chance for them to drive the process, which was really exciting.”

To help ensure Indigenous people are better represented at the mill, a working committee made up of non-Indigenous mill management, three First Nations employees and Agoke board representatives was also formed.

The committee meets monthly to discuss some of the challenges and successes with regards to creating a productive workforce, training and more. For example, they brought in an expert to deliver cultural awareness and sensitivity training for the sawmill employees and management team.

“[It] pretty much opened the eyes of a lot of Indigenous and non-Indigenous folks that may not have had that type of training or that type of education in the mainstream curriculum. It was meant to provide a better understanding of the challenges Indigenous people go through,” Rasevych shares.

‘From the tree stump to the sawmill’
Agoke has also been focused on training local Indigenous people in other aspects of forestry management to give them the skills and knowledge needed to be successful in the industry.

Their efforts have been so effective that the Ontario Forest Industries Association (OFIA) named Agoke Forest Sector Champion of the Year for one of their training programs, Agoke Forestry 101. Agoke also received $500,000 in funding from Natural Resources Canada for the program.

The 10-day program took place in a contractors’ camp one hour north of Aroland First Nation in the summer of 2019. Twenty First Nations individuals from the three communities attended the camp, where they learned about the industry from registered professional foresters and specialists. Topics included forest licenses in Ontario, identifying tree species or terrain for road building, silviculture, harvesting operations, compliance and monitoring.

Participants toured a harvesting block and spoke with equipment operators. On the final day of the camp, they visited Nakina Sawmill to see the logs go from the forest through the mill to become lumber.

“It was kind of an executive MBA in forestry,” Rasevych says. “It’s a program that we haven’t seen put on in northern Ontario before, that focused on all of the different components, right from the tree stump to the sawmill.

“But, it wasn’t just technical forestry. We also brought out elders and others to talk about what forestry has meant, what the land means and the spiritual connections to the land of the people in the area,” he continues. “There are a lot of presentations in post-secondary schools related to natural resources programming, but they don’t really focus on the Indigenous lens or perspective.”

Agoke has also arranged training on harvesting equipment for local community members. They worked with regional training institutes who received funding from the Ontario Ministry of Training, Colleges and University to train Indigenous people on a feller buncher, skidder, processor, grader, log loader, bull dozer, log truck and sand truck. This type of training has not been available for the First Nations in the past, Rasevych says.

In the bush
Under their two-year interim license (which was renewed in 2020), Agoke has an annual allowable cut of 410,000 cubic metres of spruce-pine-fir. Their target is 300,000-350,000 cubic metres per year for Nakina Sawmill,. So far, they are well on their way to this target and increasing their capacity for harvesting, Rasevych says.

As part of the joint venture with Nakina Lumber, Agoke negotiated first right for contracting in the Ogoki Forest.

This year, COVID-19 posed a challenge, as mill operations slowed down during the early spring.

“But, we’ve really seen a resurgence of contractors in the area and a commitment to be able to knock down more of that fibre to bring it to the Nakina mill,” Rasevych says. “We’re confident that we’re going to easily be able to meet the 300,000 cubic metre target, and in the future, we’ve got room to grow to bring in our own lines of equipment and more training programs for our community members.”

In fact, Agoke recently secured financing for a line of harvesting equipment: a buncher, skidder and processor from Brandt Tractor and John Deere.

“We feel that they gave us a lot more options to work with, with a lot of the bigger machines,” Rasevych explains when asked why they chose those suppliers. “Because the Ogoki Forest has a lot of rugged uplands and lowlands, we were looking for a machine that can handle those terrains and types of conditions.”

Agoke also has a road funding agreement with the Crown to manage and administer the provincial roads fund for the Ogoki Forest unit.

“Each year, there’s a certain amount of dollars that are provided to each forest management unit and we identify a road in the maintenance budget and plan for the specific unit based off of where we’re going to harvest,” Rasevych says. “So, now there’s an opportunity for Agoke to sole-source those contracts to Agoke to be able to carry out that road construction and maintenance plan.”

But, for now, Agoke contracts out the road building. The company is focused on maintaining the primary and secondary forest roads using two Volvo road graders.

Long-term goals
Looking ahead, Agoke’s main goal is to get a long-term license from the Ontario MNR.

Currently, the organization has an interim license, which will last until 2022. But, this makes it difficult to get financing for equipment that needs to be used for five to seven years, Rasevych says.

“We know that there’s potential [to grow]. We know what our needs are. But to get the financing and capital to meet those needs, we need a long-term license.”

Agoke plans to negotiate with Ontario Minister of Natural Resources John Yakabuski for this license.

Another challenge is the lack of a pulp market in northern Ontario, something that other forest industry players are also struggling with. But, Agoke sees bioheat as an opportunity to build a market for low-grade wood while also addressing communities’ heating needs.

The company is exploring the possibility of a bioheat project that uses wood waste from the Ogoki Forest in two nearby remote communities. Those communities are currently using diesel generators and have high heating demands, which is not economical, Rasevych says.

If that project is successful, Agoke will look into creating a district heating system, and, eventually, the communities may invest in a combined heat and power system.

A rising tide
Despite Agoke’s success and plans to grow, there are still barriers to more First Nations getting involved in forestry.

“Part of the challenge is we’re stuck in a colonial forest tenure system,” Rasevych says. “The province drew lines on a map with all of these forest management units and created legislation, the Crown Forest Sustainability Act, created forest management planning manuals, governance bodies of Crown corporations and the process to get into forestry. For many years, First Nations had to fight their way into the industry.”

While things have changed since then, Rasevych says that there are still consuming mills that hold SFLs that may not want to work with an Indigenous community because of concern for “changing the guard” or setting a precedent.

However, this doesn’t fit with the country’s changing mindset, because the Truth and Reconciliation Commission of Canada calls for the corporate adoption of the free prior informed consent of communities, he says.

“It’s just a matter of time before First Nations have a stronger footing in the forest sector, and there’s going to be a need for consuming mills and those operating in the forest sector to respect Indigenous, Aboriginal treaty rights,” he explains. “It’s not just a process where First Nations identify their values that forest companies then try to create buffers around to try to protect them.

Related
The Straight Goods
Treaty rights are key
The CFI Podcast: JP Gladu on the future of Indigenous forestry in Canada
Bridging the gap: how simulation training can help attract, retain younger operators