When forester Gord Chipman talks about what makes Alkali… 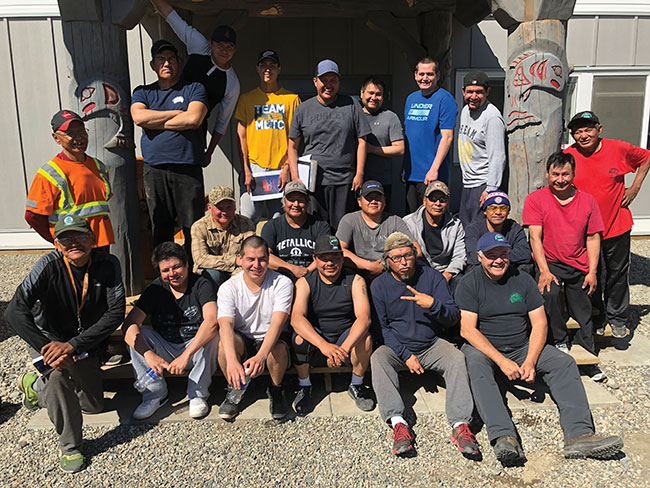 “These four things really differentiate us from other forest companies,” Chipman says.

Chipman is the forest manager for ARM, the arms-length company owned by the Esk’etemc First Nation that manages around 80,000 hectares of land on some of the band’s traditional territory just south of Williams Lake, B.C.

As a forest company owned and staffed by the community, ARM considers a lot more than just the bottom line, Chipman says.

“We’re not one of the big companies managing the resources. It is run by the people and it’s where they’ve lived, and have always lived for thousands of years, and where their future generations will live. So, there is an inherent responsibility to manage the land at a sustainable level and deal with problems we have in the forest,” he says.

Land management
ARM was created in 2005 to manage the Esk’etemc’s forest tenures. Today those tenures include a 600-hectare wood lot, a 30,000-hectare community forest, and a First Nation woodland area-based tenure that is around 50,000 hectares.

Trees are harvested full tree in 16- or 20-foot lengths, cut at the landing or roadside with a dangle-head processor. Mainly skidders are used, but one contractor, Daryl Pope, uses a Valmet forwarder. Piece sizes range drastically from 15 to 70 centimetres in diameter.

The forests on the Esk’etemc’s territory are classified as dry belt Douglas fir. Annual rainfall factors in heavily to the forests’ growth, and dry periods commonly cause the trees to go dormant.

“Our forests are too dense and when precipitation is the most limiting factor, what happens is you have these really thick forests and they sit there stagnant until they are thinned out. The natural way to thin out these forests used to be frequent, low-intensity fires,” Chipman says.

But decades of wildfire suppression have allowed the forests to continue to thicken, overtaking former grasslands and building up the fuel load. In 2017 and 2018, the Esk’etemc’s territory was heavily hit by massive, out-of-control wildfires that levelled the forests. Stands that weren’t decimated by the mega fires are battling insect infestations like the spruce budworm, Douglas fir bark beetle, and, most recently, the tussock moth, Chipman says.

“It’s challenging for us because it seems like all we do is salvage dead trees,” he says. That salvage mentality means there is little time or money spent on forest planning for the future.

“We have so much dead timber, most of the planners don’t know where they are going to be five years from now because the trees haven’t died yet. Every year everyone is reacting to salvage and that creates bad decisions from a cumulative-impacts perspective or business-development perspective or sustainability perspective,” Chipman says. 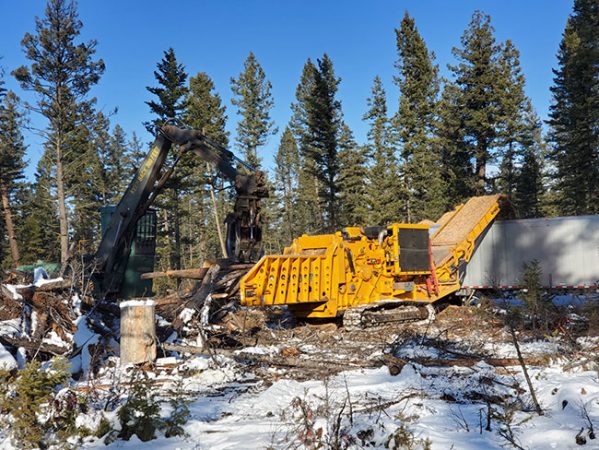 Biomass harvesting
Recently, ARM has begun to take advantage of a silver lining from salvage operations.

While the company has been doing tree thinning for decades, it’s an expensive treatment and the residual slash piles were either left in the bush, or, when feasible, burned. Recognizing the need to clear out that biomass to prevent future high-intensity forest fires, ARM applied and was granted funding from the Forest Enhancement Society of B.C. (FESBC) to support a biomass harvesting project.

ARM also assisted one of its contracted haulers – JMax Enterprises – to purchase chip trucks with 53-foot walking floor trailers in order to transport the chips out of the bush.

Some of the chips will soon be heading directly into the community for fuel. In 2018, Esk’etemc began a project to install a biomass district energy system to heat community buildings. The project, which was up and running last spring, fulfills the community’s desire to reduce its dependence on fossil fuels.

The district energy system consumes about 500 tonnes of biomass a year, which is a fraction of the volume harvested by ARM. Last year, ARM signed agreements with Pinnacle Renewable Energy – a wood pellet producer with several plants in B.C. – to provide 25,000 tonnes and has agreed to enter into an agreement with Atlantic Power’s biomass generating station in Williams Lake, to supply 10,000 tonnes of biomass.

Capacity building
The on-reserve community of the Esk’etemc First Nation is about 450 people, located 50 kilometres south of Williams Lake, just east of the Fraser River.

“We have a lot of history of forest management in the community. There are a few families here in their third or fourth generation of being involved with forestry,” Chipman says.

Over the past 10 years, nine community members have graduated from university or technical school in resource management and most are now working for ARM in various roles.

Funding through FESBC, the provincial and federal governments over the years has gone a long way to help build up more capacity in the community to keep people employed and actively engaged in forestry, Chipman says.

“That’s the only way we’ve weathered the storm with the bad economy and sawmills not accepting wood or shutting down – we went to the trough and got funding, which is a good and long-overdue investment,” he says.

Over time, as their capacity builds, the company will be able to more proactively manage the entire Esk’etemc territory, which is also long overdue.

“The goal is to increase the value per hectare out of our forest and get rid of the wasteful ways that we manage our forests, but we need to get out of the cycle of salvaging trees. We need to get back to where we are managing the forest instead of just reacting to it. We need to do more density management, whether it’s around the communities for fuel reduction or out in the hinterland because they are over grown,” Chipman says.

“There’s a lot of conversations going on right now between the five Secwepemc communities here to establish what the forest should look like. Hopefully that will lead to action and different management,” he says. “That’s going to be the future – people-based, long-term solutions to the health of our forest.”

ARM’s loggers use a variety of equipment to harvest the mainly salvage wood in the Esk’etemc’s tenures.