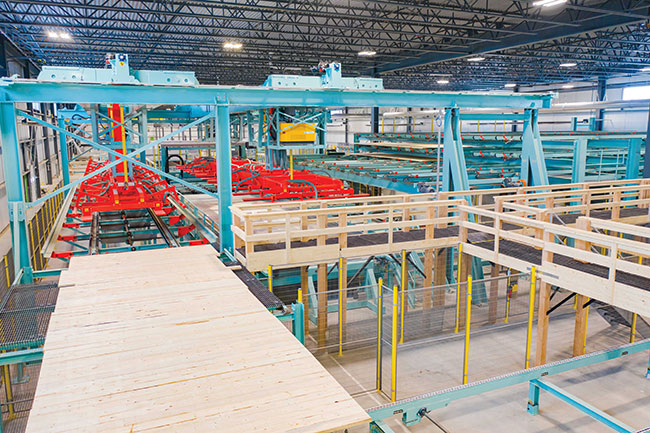 As governments and companies around the world recognize the need to invest in green projects and initiatives, the mass timber industry is taking off as a more environmentally friendly building alternative.

Patrick Chouinard, founder and vice-president of business development of mass timber manufacturer Element5 Limited Partnership, recognized the potential of prefabricated off-site mass timber manufacturing for the commercial construction industry early on. And now with Element5’s new mass timber facility in St. Thomas, Ont., up and running, the company is well-positioned to capitalize on this shift towards building with wood.

Chouinard founded Element5 in 2015. In 2016, the company purchased the assets of a small cross-laminated timber (CLT) manufacturing company in Ripon, Que., and began producing CLT, nail laminated timber (NLT), and other wood building components, explains Sarah Hicks, Element5’s marketing and communications officer. Over the past few years, the company has built up experience in the industry, delivering more than 40 projects.

In 2019, the company decided to expand its operations, announcing plans to construct a $50 million mass timber facility in Ontario.

“The Ontario expansion was always part of the plan,” Hicks says. “Patrick had identified the Ontario market, which is responsible for nearly 40 per cent of all construction in Canada, as the natural location for a mass timber facility. With the growing demand for mass timber, an abundant and sustainable fibre supply from northern Ontario, close proximity to key Canadian and U.S. markets, and no other CLT and glulam manufacturer in the region, the real question wasn’t, ‘Why?’ but, ‘When?’”

Construction on the factory began in November 2019, and was completed a year later, with all equipment installed.

Despite the pandemic, the company did not run in to any issues during construction. Installing the equipment was also a smooth process, as Ledinek – who supplied the majority of the equipment – had a team on-site throughout the commissioning process, Hicks explains.

“From a building type perspective, our focus is on buildings that can benefit the most from a prefabricated, mass timber structural solution,” she adds. “Structures with an optimized, repeatable grid, such as offices and multi-unit residential buildings, can save a lot of time and money by pursuing mass timber construction.”

The products are destined for the construction markets in Ontario, Manitoba, Quebec and states in the central and northeast U.S.

Once the St. Thomas plant is fully operational, it will employ 25 people for just the production process. According to Hicks, after six months, Element5 plans to employ closer to 50 people at the facility. 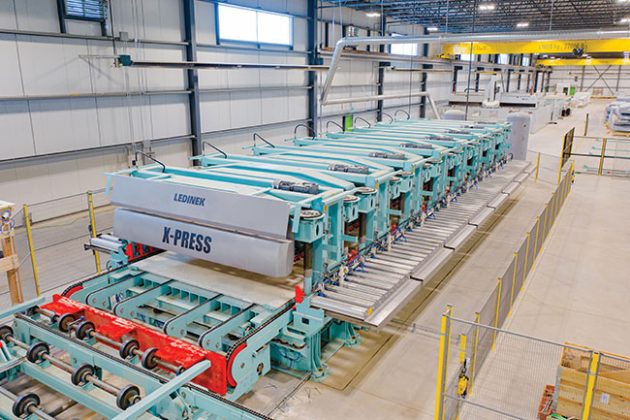 The plant now is the most fully automated mass timber manufacturing plant in the world, Chouinard tells CFI.

To produce the CLT and glulam products, SPF lumber is first received and sorted. The lumber then spends approximately three days in the Cathild conditioning kiln in order to bring all the lumber to a consistent moisture content (MC) of 12 per cent, the optimal level for CLT and glulam manufacturing.

Once the lumber reaches 12 per cent MC, it is loaded into the production line, and then enters the finger jointing station to create longer lamella for the CLT panels, Hicks explains. The finger-jointed lumber rests while the adhesive cures, and then lumber is planed to square edges and uniform thickness. After that, the lamella are edge-glued at the glue press to create a layer. The CLT panels are assembled in three, five, seven or nine layers, with adhesive applied between each layer.

The assembled panels then move into the pneumatic press to be cured. Once cured, the panels proceed to the sander for finishing. Finally, the panels go to a CMS North America CNC machine, commissioned by CncTech+, where service channels, window openings and other cut-outs are made.

To help move the 3.5 x 16 metre CLT panels in and out of the CNC machine and onto trucks to be shipped, the plant recently bought two 10,000-kilogram-capacity Zelus cranes.

Growth opportunities
Although Element5 is still ramping up production at their St. Thomas plant, they are already considering adding a third shift if demand warrants it, Hicks says.

“We see huge growth opportunities,” Chouinard adds. “In all likelihood, we will build another plant in the St. Thomas area. The current plant will take the major components that we manufacture in CLT and glulam, and the second plant will be a prefabrication plant that takes those core components and adds value to them. So, we will start to design and prefabricate our own solutions.”

Chouinard and Hicks believe demand for mass timber will increase as more and more people recognize its benefits.

“There’s no question that the wave of using these materials in construction is upon us,” he says. “It makes sense to build in this way for so many reasons – there are really no negatives for anybody.”

But, there are some barriers to expanding the use of mass timber in Canada. One such barrier is public misperceptions about the strength and durability of wood, as well as fire safety.

“A general need for more education and experience amongst construction professionals is a limiting factor,” Hicks says. “Although the landscape is changing, at this moment in time, there aren’t enough architects, engineers, quantity surveyors, building officials and contractors that know how to design, engineer, price, evaluate and assemble mass timber buildings.”

Leading the way
Despite this, mass timber represents a big opportunity for the wood products industry.

“Supplying lumber for mass timber production can help insulate primary producers from extreme fluctuations in the price of lumber,” Hicks explains. “Additionally, by having a strong forestry value chain, with strategic ties between the northern mills and southern manufacturing facilities, we can capitalize on our natural resources and advanced manufacturing capabilities to turn this industry into a major economic engine for the province and a key pillar of a new green economy.”

And, thanks to Canada’s strong forestry supply chain and its mass timber manufacturing capacity, “Canada is in a fantastic position to be able to lead the industry,” Chouinard says.

“Whereas Europe had an advantage in that they had these really evolved manufacturing facilities to be able to produce mass timber efficiently, we now have, here in Ontario, the most fully automated mass timber manufacturing plant in the world,” he adds. “So, we’re no longer at a disadvantage.”

As such, Chouinard believes that Element5 will continue to be one of the leaders in the industry.

“We believe in innovation and leadership. We’re not just a commodity supplier in the traditional way that the wood products industry has been. We believe in innovation, research development, and testing and certification of new products,” he says. “We’re constantly trying to introduce new products into our overall scope of what we do, and that’s going to put us in a leadership role.”