June 16, 2014 - In rural New Brunswick, a couple hours north of Moncton, a former logging contractor has sold his forest machines to invest in a green technology that will give local wood products the durability to compete with exotic hardwoods. The technology was developed in Finland where wood product manufacturers have found that simply heating lumber at very high temperatures changes the chemical composition of the wood to make it rot resistant.

Pierre Friolet worked in the forest for 20 years, but in 2008 he decided to give up the forest side as it became harder for the contractor to make a good wage. “It’s all about how fast you’re cutting it now and the technology that’s coming out is just to cut faster and faster.”

As wood prices go up, the sawmills are recouping more of the costs but the logging contractors aren’t benefiting from the market improvement, Friolet explains. “I always loved the wood; we don’t add enough value to our resources.”

Finding more value in the woods
Value is what Friolet and his partner, Robert Lennon, are now adding to the lumber they’re treating at Thermalwood Canada. Building on experience in the local wood products industry, they have carved out a niche to complement rather than compete with other local wood manufacturers. The method they use, thermal modification, can be used on any species, but Thermalwood Canada is narrowing in on hardwoods such as ash and maple.

“We’re going to help to bring more value to the private woodlot owners in the area,” explains Friolet. “We’ve gone down the road of hardwoods, which nobody else has really done - it has allowed us to open up a bunch of other niche markets.”

How the process works
Experimental research on thermal modification of wood was carried out in the 1940s and 50s in the U.S. and Germany, but the industrial application of the process was developed in the 1980s. Research and development on industrial uses has resulted in the development of many thermal modification treatments including: Perdure (Canada), ThermoWood (Finland), Retification (France), Thermoholz (Austria), Intemporis (Switzerland), Iwotech (Denmark), and others.

The kiln Lennon and Friolet use was built by Valutec (which uses the technology developed by ThermoWood) completely out of stainless steel to resist the stress caused by high temperatures, acids and other compounds that evaporate from the wood. Using only heat, steam and water, the wood temperature is raised quickly to around 100 degrees Celsius.

Once the wood’s moisture content is reduced to nearly zero, the actual thermal modification stage begins by bringing the temperature up to a level of 185 to 215 degrees Celsius depending on the wood species. The wood is kept at this temperature for a couple of hours in low oxygen and steam to prevent the wood from burning and to initiate chemical changes.

The temperature of the wood is then reduced using water to cool it and return some moisture to the lumber, for a moisture content between four to six per cent.

The whole process takes about 65 hours in the kiln and doesn’t allow for any shortcuts. If shortcuts are taken and the thermal modification process is initiated before the wood has been completely dried, any moisture that is not removed in the first step of the process would become trapped within the wood’s core as the lumber is heated from the outside in. As the temperatures increase and heat penetrates the wood, the moisture can result in stress and damages to the wood.

But cracks might not be immediately apparent. “If you sold it to somebody in a rough form, then they get it and they want to split it in half, the issues will start to show up then.”

If thermal modification is done properly, however, the heat changes the molecular structure of the wood, improving the dimentional stability, improving its resistance to fungal decay and changing the colour of the wood throughout. Heating the wood to these temperatures results in the degradation of hemicellulose with water-binding properties and lignin reticulation indicating the formation of molecular chemical bonds.

The end product can last as decking for over 25 years and as a siding for over 50 years. Unlike pressure-treated lumber, nothing is added to the wood and the product can be made from local wood rather than imported exotic hardwoods. The end product, however, is less resistant to impact and abrasion, and the chemical changes in the wood accelerates discoloration when exposed to UV radiation or rain. Research in Finland has also found that thermal modified wood remains vulnerable to termites.

Developing a niche
Thermally modified wood requires no stains to protect it from the elements, though it will turn grey without it. If thermal modification is done slowly and carefully, there is very little shrinkage or warping during the treatment and the process blends any visual flaws that might have made the wood less desirable before modification.

“We’ve taken a product, like pine, that if you left it outside, you might get five to 10 years out of it and through this process, you’ll get 25 plus. I have used this product for raised garden beds and three years later I pulled it out and washed it just to see how it was. It was just like it was brand spanking new,” says Lennon.

Lennon explains his decision not to compete against pressure-treated lumber, which is much cheaper to make than thermal modification. Because of the price, “people are going to pick the pressure-treated lumber versus the thermally modified right away,” says Lennon. “So we focus more on the hardwoods to be able to compete with the exotic hardwoods, like the mahogany and stuff like that that people are using for decks. Now we can offer white ash or maple for exterior decking whereas people would never have used it before.”

Focusing on underutilized wood, Thermalwood Canada buys bird’s-eye maple that has mineral stains that would reduce the wood’s value for any other application. Instead, after the wood has been thermally modified, it has been darkened and the stains are subtle. The wood that would have previously been used to make pallets is now a premium piece of siding, decking or can be used for interior finishes.

Space to share
At the Canadian Woodlands Forum Spring Meeting in April, Elizabeth Beale, President and CEO of the Atlantic Provinces Economic council told attendees that the forest industry in New Brunswick shrunk by over 40 per cent since 2004. But since April 2013, export growth to the U.S. of Atlantic forest products has been up 20 per cent. Thermalwood Canada is setting itself up to take advantage of the improving economic conditions and support others who want to do the same by sharing warehouse space and wood-processing equipment.

“Our business model has evolved so that we’re building partnerships with people who want to manufacture a product using our wood,” says Lennon. “And if we can set them up here within our facility, it removes a lot of the waste of transporting that material. Once we’ve set up these different companies within our facility, we work together as a cooperative or a cluster format.”

To this end, Lennon and Friolet have bought some conventional kilns and dehumidifiers from a failed sawmill to provide some local drying systems. Using underutilized hardwoods and local species is the company’s aim but they’ve had to go far and wide to get the supply of wood that’s in demand in their markets. Rather than continuing to import from Maine or New York State, the company is making an investment to make it easier to buy directly from a neighbourhood supply.

“If you’re a private woodlot owner, and you’ve got all this wood that you’d love to saw and sell, you can’t because you can’t kiln dry it,” says Lennon. “And their only option today if they want to make some money with the wood on their land is to send it down to Miramichi to get it chipped up for OSB.”

The company currently has partnerships in place with two companies and is in discussions with a third to move it into the warehouse and make use of both the wood and the equipment Thermalwood has on site.

He is quick to correct the common misconception that the wood takes on inert properties after thermal modification. “Thermally modified wood is not a dead material, there is still water adsorption, swelling and shrinkage [that] can still be observed with variation of the climatic conditions. The higher the temperature of treatment, the more stable the material will be.”

According to his research, there are currently four variations of thermal modification in use in industrial application in Canada with six kilns in production and a fifth kiln manufacturer in Ontario that has closed temporarily. But Tremblay has had enough inquiries into the technique to keep a list up to date so he can send it off quickly and easily when curious investors come calling. “In the last six months, there has been a new wave of interest,” said Tremblay.

The manufacturers process different species for different markets, many of which are exporting to Europe. But despite  increased interest, the kilns are not currently running at full capacity.

Forming partnerships and educating architects is working for Friolet and Lennon, however. “We just got a purchase order for nine thousand square feet of maple siding for a building in Newfoundland. So we’re very happy we got that.” 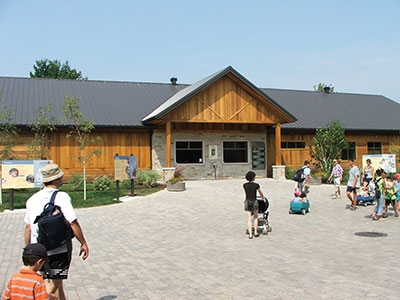 The chemical changes in thermally modified wood accelerates discoloration when exposed to UV radiation or rain. In rural New Brunswick
Print this page