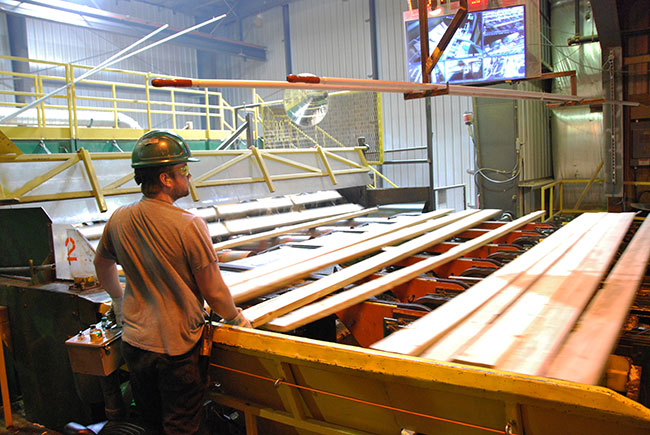 “I think it’s a game changer on many fronts,” Larouche said in an interview with CFI. “It’s raised the ceiling of opportunity for all our employees because we’re now part of a family of 30 mills. We’re the largest producer of Canadian lumber and the fourth largest in the world.”

“We’re the fastest growing lumber company right now; that company was half of what it is right now three or four years ago, which is phenomenal,” he said.

Interfor will be implementing a professional operational platform to continue its growth in eastern Canada. “This is exciting. Interfor is coming with a track record of fixing assets,” Larouche said.

At the same time, he said Interfor comes with a “light touch” to work with the existing people and teams. “We need to continue what we’re doing well,” he said.

“Both companies are alike – what I mean by that, is that the how matters for them and for us. How we do things defines who we are as a company, who we are as a manager, and who we are as an individual. We will continue fostering those relationships and the how over the coming weeks and months and continue to develop this eastern platform,” Larouche said.

Yesterday Interfor announced a welcome bonus of $500 for all former EACOM employees.

“I want to acknowledge all of the good effort that’s been done over the past two years – managing covid and the restrictions and working with a mask and the foggy safety glasses,” Larouche said.

“Our group of employees have been, not good, they’ve been phenomenal. They’ve been phenomenal about the way that they do things and the way that they interact with each other. That’s why we work so hard to create such a unique and special working environment and we want to continue to foster that unique and special work environment. For all of that, thank you very much from the bottom of my heart.”

Larouche has 20 years of experience in the forest industry, including 10 years with Cascades and two years with Tembec. He has served as EACOM’s vice-president of human resources for nearly three years.

“I’m excited about what the future holds for us,” he said.