Two years ago the Ontario Trucking Association (OTA) shocked the industry when it unveiled a controversial policy that would require the activation of speed limiters on all heavy-duty trucks operating in the province. Two years later, the provinces of Quebec and Ontario appear poised to act on the recommendation, and have taken steps to legislate the use of speed limiters. 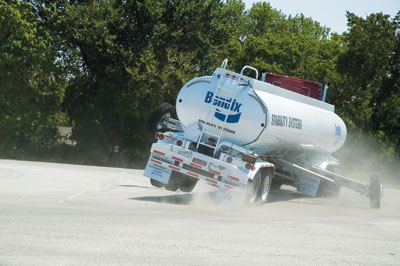 This year, the OTA (and by extension, its national umbrella organization the Canadian Trucking Alliance) again made a surprising, and bold, policy announcement, this time pushing for the mandatory installation of anti-rollover technology on all new trucks sold in Canada.

The association developed its new policy in response to what was dubbed the “Summer of the Rollover” in the Greater Toronto Area. Several high-profile truck rollovers made headlines this past summer, snarling traffic on major highways and causing several fatalities. In most cases, it was the four-wheelers who were at fault, but it’s no secret that trucks are prone to rolling over when making drastic avoidance manoeuvres.

“Our members are convinced that the current anti-rollover technology performs well with all types of tractor-trailer configurations, and should become part of all standard new vehicle packages,” announced OTA president David Bradley at this year’s convention. The association has written all truck manufacturers, asking them to make the installation of anti-rollover technologies standard on all new trucks. Volvo and Mack already have done so, making the technology a non-deletable option (it can be removed, but no credit will be rewarded for doing so).

Proven Systems
Anti-rollover systems are proven to mitigate the risk of a rollover. The technology exists, it works, and in the OTA’s opinion, it behooves the industry to make use of the technology if it means that lives will be saved as a result.
That sound you hear is the collective groan of fleet managers and owner/operators, who are already coming to terms with the increased purchase price of new trucks, sparked by increasingly stringent emissions standards. But more on price later. First a few words on what anti-rollover systems exist and how they work.

There are currently two manufacturers of truck stability systems: Bendix and Meritor WABCO. Between them, they offer several anti-rollover solutions which can best be split into three categories: roll-only; full-stability; and trailer-only systems. Haldex is also a player in the trailer-only stability system market.

However, Barrie Montague, senior policy advisor for OTA told me that “At this time we have only approached the truck manufacturers to request they install the sensors and an ECU (control module) on the tractors.”

Roll-only stability systems, such as Meritor WABCO’s Roll Stability Control (RSC) system, are designed to detect conditions that precede a rollover and then intervene to take corrective actions, including decelerating the truck and applying the brakes to selected wheels as required. Full-stability systems, like Meritor WABCO’s Electronic Stability Control (ESC) and Bendix’s Electronic Stability Program (ESP) take it a step further with the use of yaw and steer angle sensors that can also protect against jackknifes. These systems also work on slippery surfaces like snow- or ice-covered roads. Simply put, it’s a more advanced form of anti-rollover technology with increased functionality, protecting against a wider range of scenarios.

However, Bendix officials argue the OTA should have taken its proposal a step further and called for the mandatory installation of full-stability systems, which also address directional stability.
I’ve had the chance to test both the Meritor WABCO and Bendix electronic stability systems. You’d be hard-pressed to step out of the cab following a demonstration without believing it can be an effective tool for reducing truck rollovers.

In the demos, the companies equip a variety of configurations with outriggers – training wheel-type devices that protrude from the sides of the trailer. When the tires on the outriggers touch the pavement, you’ve crossed the vehicle’s rollover threshold and would have ended up on your side had the outriggers not been in place. With the system turned “on” and then “off,” there’s a
remarkably different experience. Stability systems widen the margin of error for drivers who may take a curve a bit too fast. They also allow you to make a high-speed evasive manoeuvre without ending up shiny side down.

They do not, however, replace a good driver, stresses Fred Andersky, marketing manager of electronics with Bendix. Every system has its limits and if you take a 30 km/h corner at 80 km/h, no system is going to save you.

The anti-rollover technologies available also have limited effectiveness for log haulers when running on smaller access roads or severe terrain. The systems will work as advertised on the highway or major gravel roads, but they’ll do little to prevent off-road, low-speed rollovers where ground instability may have been a factor. But it’s worth noting the systems were initially designed for the tanker truck market, which shares some similarities with logging; most notably dynamic loads with high centres of gravity. In the end, they will help prevent that worst of forest industry scenarios – an on-road, loaded logging or lumber truck rollover involving community casualties.

Priced Right?
Now, back to price. The good news in all of this is that the technology is remarkably inexpensive, considering the sophistication of these systems.

The Meritor WABCO RSC system is listed in the databook at US$750. Its more advanced ESC system costs about double that. Bendix’s full-stability system is about US$1,900-$2,100, with the truck manufacturers ultimately setting the price.

“When you figure that into the total price of the vehicle, it’s less than 2%. And when you take discounts into effect, it’s less than 1% when it comes down to it,” Andersky points out. “If you look at the list cost of a chrome bumper, it’s about $1,700-$1,900. So if you’re willing to put something shiny on the front, it might be nice to have something that keeps the shiny side up, and doesn’t cost a lot more.”

And then there are economies of scale to consider as well. When Volvo made the Bendix stability system standard on all highway trucks in 2005, it was for the most part able to mitigate a price increase thanks to its higher volume purchases and improved productivity on the assembly lines as installers became more familiar with the system.

Right now, OTA is playing the waiting game, as it patiently anticipates responses from truck manufacturers. If the truck OEMs don’t take it upon themselves to make stability systems standard, then it appears the association is poised to ask government to mandate the use of the technology. Considering how doggedly the association has pursued the speed limiter issue, it’s safe to say this issue won’t be going away any time soon.

James Menzies is executive editor with Trucks West, and writes this column exclusively for CFI Magazine.