Features Opinions
Language matters: The way we speak shapes the way we think 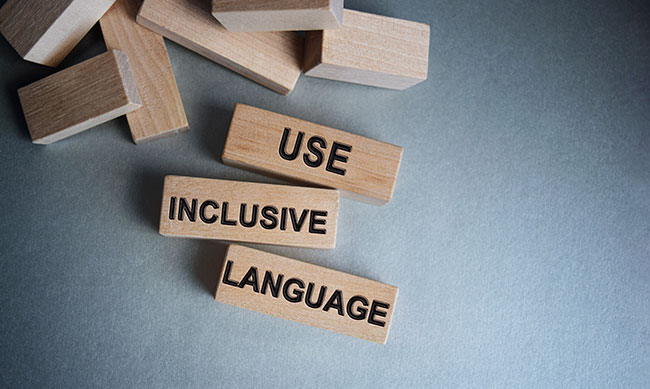 The way we speak shapes the way we think. It also offers validation and acknowledgement of different people in our community. One way to create psychologically safe and inclusive workplaces is to be aware of inclusive language, why it matters, and how to use it.

What is inclusive language? Most basically, inclusive language respects all people as valued members of society. It does not exclude, or stereotype based on individual characteristics such as race, sexual orientation, age, ability, or gender identity.

We all have biases, both conscious and unconscious. Many of us are not aware when these biases leak into the language we use. For example, using the term “guys” to address a room full of men might seem fine. But if the group is diverse, other people in the room may not feel acknowledged or seen.

For some people – especially those who have never faced marginalization for their identities – the importance of inclusive language may seem minor compared to other workplace issues. But it is a big deal. Understanding and using inclusive language plays an important role in promoting higher employee engagement, better customer service, and increased productivity. Most importantly, we live and work in diverse communities, so it is important to make everyone feel seen and included.

Before we get into examples of inclusive language, we need to understand a few basics.

It is common for people to confuse sex, gender expression, and gender identity. But they’re all different things. Understanding the difference is critical when learning about the importance of inclusive language.

Sex is a label – male or female – that you’re assigned at birth by a doctor, based on external sex organs, sex chromosomes, and internal reproductive structures. While the sex you were assigned at birth is a fixed category, your gender identity and gender expression could be a much more fluid combination.

Gender identity is how you feel inside. It’s your deeply held sense of being male, female or another gender. This is separate from birth-assigned sex.

Gender binary is the mistaken notion that there are only two sexes (male/female) that align with two gender identities (man/woman) and gender expressions (masculine/feminine.) The gender binary creates cultural expectations and pressures that marginalize those that don’t fit into gender binary.

Sexual orientation is your physical, emotional and/or romantic attractions to others. It is not a preference or a lifestyle. Inclusive language does not assume that sex, gender, and sexual orientation fit neatly into the binary model of male/female, man/woman, and straight/gay.

One simple way to be more inclusive is to use the gender-neutral pronoun they, when speaking about a hypothetical person, or when you don’t know a person’s gender identity. You should also avoid terms like sir, ma’am and miss when addressing people.

When addressing mixed gender groups, use terms such as folks, friends, or everyone, instead of guys and ladies and gentlemen.

The first principle when dealing with someone directly is, when in doubt, ask. Do not make assumptions about a person’s identity based on their appearance or our cultural biases. You can create a safe conversation by starting with self-identifying, for example, “Hi my name is Chris and my pronouns are he/him.”

It’s also important to be aware of your internal biases. The terms we use to describe various professions is often gendered – like policeman, mailman, or stewardess. Pause and think before you speak about a particular profession – it’s just as easy to use the term police officer, flight attendant, or mail carrier.

When someone’s gender is unknown, many people will make assumptions. For example, referring to an unknown CEO as he/him, or an unknown nurse as she/her. If a person’s gender is not known, it’s best to ask – or use the term they.

It’s also important to not make assumptions about marital or family relationships (for example, use spouse or partner instead of husband and wife.) Even seemingly harmless phrases like mom and dad can pose difficulties, as they fail to acknowledge that many households do not have two opposite-sex parents. Refer to someone’s parent or parents instead.

Inclusive language is about acknowledging that people are complicated human beings – they are not defined by their gender, race, religion, or physical or cognitive condition or circumstance.

When speaking about a person’s medical situation, illness, or injury, only do so if it’s relevant to the topic – and always put the person first. For example, saying “a person who uses a wheelchair” is inclusive. Saying someone is “confined to a wheelchair” or “wheelchair bound” is not. Similarly, for cognitive conditions, say “a person with autism” rather than referring to someone as autistic.

When referring to a person’s race or ethnicity, use adjectives, not nouns (for example, say an Asian person, not an Asian.)

Similarly, use descriptors of gender identity or sexual orientation as modifiers, not as nouns. For example, say a lesbian woman rather than a lesbian. When speaking about professions, refrain from saying a female judge or a male nurse, as this implies certain professions have a default gender.

The effort is worth it

At first it may take a bit more energy to be mindful of the language you use – but it’s worth it. In doing so, you’re retraining your brain, setting an example for others, and contributing to a supportive work environment.

There are other ways to promote inclusivity in your workplace – but being mindful and deliberate about the words you use is a simple and easy way to start.