Features Features Women in Forestry
Logger life: BC log hauler Tiara Seitz paves the way for women in the industry 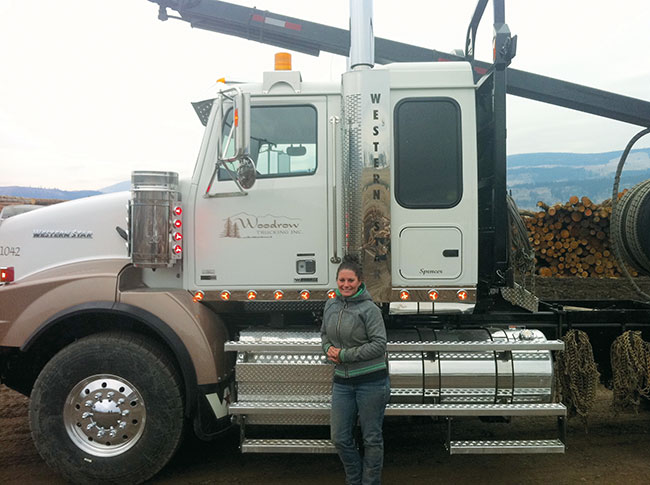 Tiara Seitz has been a log hauler for over 20 years now, and says she loves what she does. But her start in the business wasn’t a traditional one. In fact, she “kind of stumbled into it,” she says.

“An opportunity came up, and I just decided from there to buy a truck, to give it a whirl. I never in a million years thought it would become what it has become for me. I definitely didn’t think I’d have the longevity that I’ve had, so it was a good choice for me,” she says.

The owner of Woodrow Trucking in Lower Nicola, B.C., Seitz says log hauling gave her the opportunity to take her two young kids on the road with her. This also influenced her choice in truck: she initially bought a Western Star because it had a bench seat.

“My children were very young when I started and I needed a truck that could fit car seats. That’s probably not the reason why anyone chooses a specific logging truck, but that’s why I chose it,” she explains, laughing.

Since then, she has remained loyal to the Western Star brand because of the amount of room it provides. Today, she drives a 2019 Western Star front drive with a quad trailer.

Seitz’s love for her family also influenced the name of her company, named after her grandfather Woodrow Melvin.

“I just thought it was such a unique name, and I idolized him. He passed when I was a teenager. I feel the name reminds me of him every day, and I think that’s just so very important,” she says.

Today, the number of loads Seitz hauls per day varies depending on where she is hauling. She has spent the past five months hauling away from her home in Merritt, B.C. On average, she hauls two loads per day.

But when CFI spoke to her in April, she was hauling one load per day, since the nearby mills were shut down for break-up. Seitz was also hauling pulp, which has been in high demand given its use in personal protective equipment (PPE) for frontline workers, out to the B.C. Coast.

A typical day in the life for Seitz involves waking up at midnight or 1:00 a.m., then working for 15 hours, she says. Then, she’ll go home and work on the truck with her boyfriend. Afterwards she’ll take care of typical household chores, make dinner, and then go to sleep by 7:00 p.m. On the weekends, Seitz says she typically dedicates one day to maintaining her truck, and one day off if she can.

Don’t take no for an answer
Although Seitz quickly fell in love with log hauling, she admits that as a woman entering the industry, it was difficult in the beginning.

“There weren’t very many women. There were a few gals that hauled; their dads hauled and I think they did it with their dads – they were drivers. As an owner/operator, I think it was hard for me to start, for sure.”

Initially, Seitz had to prove she could do the job. She learned how to do things differently, like throwing her wrappers and putting on chains in a way that works for her and her body. Over the years, she has faced some prejudice from people who think log hauling is a man’s job. Ten years ago, a male loader refused to load her truck because she’s a woman.

Although there are still some people that aren’t as accepting as others, today “it’s definitely accepted a lot more and it’s a lot easier now than it ever was,” she says.

“There are quite a few women in the industry that I see now, and I love that. But I remember the first time I saw a woman out on the road that I didn’t know. I’ve never been so excited in my life! I don’t know why I didn’t think me doing it was unique, but seeing a woman I didn’t know out there, that was so cool,” she shares.

Her advice for women looking to get into the industry?

“Don’t take no for an answer. Don’t let anyone tell you that you can’t,” she says. “There will be people still in this day and age telling you that you can’t as a female. But I’m just thankful I never listened to that.”

Market challenges
Seitz’s favourite thing about the job is that every day is different and brings its own challenges. But today, things are particularly difficult for the industry.

Like any other log hauler in Canada, she is facing a number of challenges thanks to multiple compounding issues, such as policy changes, the downturn in the B.C. forestry sector and COVID-19.

With regards to policy changes, the federal government has mandated the use of electronic logging devices (ELDs) for all trucking companies starting this year.

In Seitz’s opinion, requiring ELDs is a good idea, but it’s far from perfect.

“So, I think it’s good for safety reasons, but then I also wonder how is it going to work on a day when you’re sitting on the Coquihalla behind an accident and run out of hours?”

For her part, Seitz has found a simple ELD to use: the Keep Truckin’ app. So far, she hasn’t run into many issues using it, although she admits there’s the odd day where she runs over the time limit because of an unforeseen issue, such as an accident on the highway.

“Other than that, I run a very legal business, so for me it doesn’t affect me in a negative way,” she says.

However, the downturn in B.C. has had a significant impact on her business.

“It’s a tough struggle. I’ve been fortunate – I’ve had a very loyal contractor that’s taken care of me, but it’s tough for everyone in our industry. It’s very sad, actually,” she says. “For me, this isn’t a career – it’s my life, it’s a lifestyle, and it’s sad to me to see so many people struggling to survive.”

When asked what needs to change in the industry to ensure another downturn like this does not happen again, Seitz admits that she’s at a loss.

“Everyone has their own opinions, whether it’s government-related or a shortage of wood, but I don’t know,” she says. “I have a son now that’s hauling, and I feel grateful that he had 20 years traveling with me to see what it can be and hopefully what it can be again. I hope for him now that things will look up.”

Unfortunately, COVID-19 did not improve the situation in B.C.

“This past summer was just such a struggle to keep your head above water, and it felt like you were just surviving, and then this is another kick,” Seitz says.

In the spring, at the time of writing, COVID-19 had caused weak markets, forcing multiple mills – particularly in B.C. – to take downtime.

“The market is downhill, which in turn means sawmills are shutting down. So, that has greatly impacted me – we don’t have any sawmills around here running right now, and it’s all market driven because of COVID. So, it’s impacted us hugely,” Seitz says.

Despite the difficulties, Seitz still sees Woodrow Trucking being successful in five to 10 years, although she is less optimistic than she would have been two years ago.

“Today, I’m just so grateful for what I have and the opportunity I have to work because I know so many people have lost that opportunity. For me to sit here and say, ‘I see myself here in five years,’ is kind of sticking my neck out,” she says.

When it comes to the industry as a whole, Seitz hopes to see it recovered in a few years.

“I hope it continues the way we were a year-and-a-half ago. It’s a day-by-day struggle right now, and you don’t want to think negatively, but you’re also hesitant to think overly positive,” she says.

Yet, through all of the challenges, she still loves what she does.

“For myself, I can’t see any other life.”


Related
Women in Wood cutting down stereotypes
Editorial: Learning from women in the forest sector
The CFI Podcast: Tanya Wick on women in forestry
‘Poised for growth’: Q&A with Jason Krips, AFPA’s new president and CEO