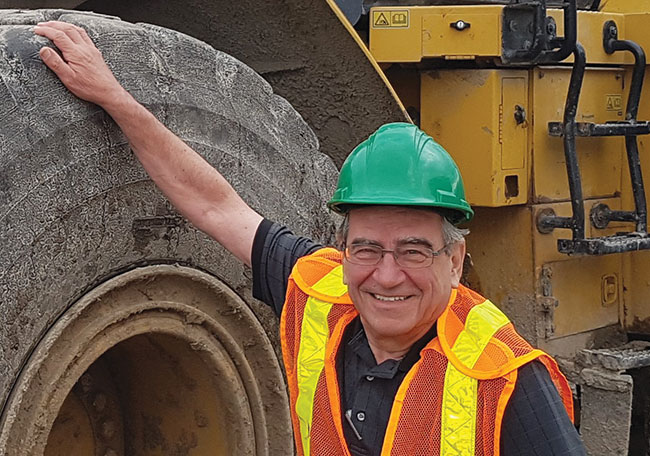 Frank Dottori is a well-known figure in the forest industry. The founder of Tembec Inc., he made a name for himself as an entrepreneur and passionate advocate for forestry.

Despite having “retired” in 2005, he has continued pursuing opportunities in the industry, most recently as the CEO of White River Forest Products (WRFP) and WRC Timber.

The sawmill, based in White River, Ont., was shut down for seven years before WRC Timber (the mill’s parent company) bought the mill in 2013. As a result, “it wasn’t in particularly good shape,” Dottori tells CFI. But Dottori and WRC Timber saw potential in the mill, largely because of the nearby available fibre supply.

WRFP has access to more than 500,000 cubic metres worth of SPF and aspen trees, located within 90 kilometres of the site, Dottori explains.

“It’s a well-roaded site, so our wood costs are probably some of the lowest in eastern Canada,” he says.

To run their operations, the mill employs approximately 160 people, working 100 hours per week.

The mill currently produces SPF dimensional lumber and stud lumber, ranging from 2x3s to 2x6s, eight to 16 feet long. The mill also produces some wood chips and hog fuel, and is looking at the possibility of producing hardwood aspen lumber.

When it comes to markets, the mill is limited by its location. As a result, the majority of the products (60 per cent) are sold domestically in Ontario, while the remaining 40 per cent goes mostly to Michigan, in the U.S.

Inside the mill
The mill itself is set up in a way that prioritizes efficiency, featuring new automated equipment to help boost production capacity.

First, two new Sennebogens and one new Volvo LH180 wheel loader unload the logs and take them from the wood yard to two infeed conveyors and an unscrambler. From there, the logs go to two new Nicholson A8 debarkers.

After debarking, the wood goes to one of two conveyors. One conveyor takes logs to be sorted by size into three reservoirs, which feed a step wave feeder. The logs then go to the primary breakdown line – a new, fully automated Comact line with a TBL3 designed to run up to 40,000 board feet per hour.

But, “we’re not there yet because we have a bottleneck in our trimmer and our infeed, which we have to address as part of our capital expenditures going forward to raise the capacity of the mill,” Dottori says.

The other conveyor takes eight- and nine-foot logs to a HewSaw stud line. Log sizes at the mill run from four to 18 inches in diameter.

The company is in the midst of constructing a second line that will directly feed the Comact line and eliminate a major production bottleneck, Dottori says.

Lumber then goes to a USNR trimmer and stacker, and then out to the yard. WRFP also plans to upgrade the stacker in order to handle higher production capacity.

From there, the lumber goes to one of four dryers, including three COE kilns. Two of the three COE kilns have recently been upgraded. The fourth kiln is a new Cathild mobile dryer, which “moves up and down the railway tracks rather than the other way around where you push the lumber in and out,” Dottori shares.

The lumber then goes to a USNR planer and a trimmer, and is then sorted into 52 sorting bins. After packaging, the lumber is taken out to the yard, and then shipped to market by truck or rail.

Maximizing potential
To bring the mill up to speed after lying dormant for seven years, the company has carried out multiple upgrades, part of a three-phase investment program.

The first phase focused on replacing the two old sawlines with the new Comact line, for a total of $12 million, including installation.

The second phase is the installation of a new infeed and two new Nicholson A8 debarkers, for approximately $6 million. One of the debarkers is now running, and the other will come online in a few months, Dottori says.

The third phase is the completion of the new mobile dryer. This project will cost around $3 million, and the dryer will start up this summer.

On top of these investments, the company has spent an additional $4-5 million streamlining the old mill, replacing obsolete equipment. All told, WRC Timber has invested more than $20 million to modernize the mill, Dottori says.

But, they don’t plan on stopping there: “To get the full potential of the mill, we probably have to spend another $10-12 million,” Dottori shares.

Ultimately, these investments will increase the mill’s production capacity from 120 mmbf per year to 160-170 mmbf, which ties in with the mill’s wood reserve.

“When we get there – I suspect over the next 18 months – we will have, I think, one of the best mills in eastern Canada,” Dottori says. 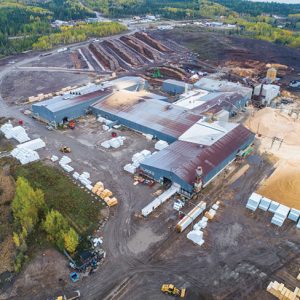 An aerial view of the WRFP site and yard in 2018, where 160 people are employed making SPF dimensional lumber and stud lumber. Photo courtesy WRFP. 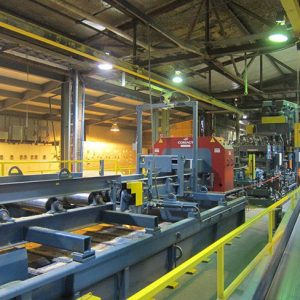 The new, fully automated, Comact line with a TBL3 designed to run up to 40,000 board feet per hour. Photo courtesy WRFP.

‘Room for growth’
Given the recent boom in the lumber market, these investments are coming at the right time for White River Forest Products.

“I’m optimistic that the prices will stay very strong over the next three to five years,” Dottori says. “I think there’s going to be a tremendous opportunity for housing in Canada and the U.S. in the next six to seven years, and I think that’s going to be great for this industry.”

Dottori also believes the industry will soon see the benefits of the transition to a greener economy, as more members of the public become aware of lumber as a sustainable resource and a carbon sink.

As a result, “I think we’re going to see a pretty good return on any investment that goes into this industry,” he says.

“When we were looking at investing in this new equipment, the average price of lumber was around $500 [so] we targeted returns of 10-15 per cent. I think it will probably be nearer to 20-25 per cent in the next few years,” he adds.

But in the long-run, there are some areas the industry needs to improve upon in order to create more stability, Dottori says.

That’s one of the reasons why WRFP installed the new Comact primary breakdown line – to increase the yield at the mill, Dottori says.

When WRC Timber first bought the mill, its yield was approximately five cubic metres per thousand. The Comact line brings that number down to three-and-a-half.

“That’s a huge reduction in fibre costs and demand is offset even more because of the extra return and yield you get,” Dottori says. “I think that’s the kind of technology that should be coming into the industry where you get much, much better recovery. So, I think there’s room for growth in Canada.” 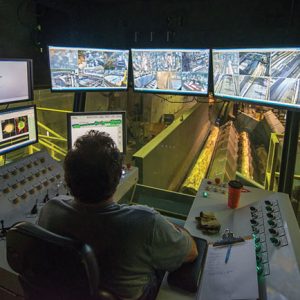 Inside the debarker infeed control room, before logs are processed on the Comact line. 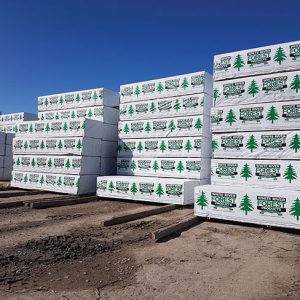 WRFP lumber stacked and ready to be loaded for transport by rail line or trucks to customers in Ontario and the United States.

An industrial rebirth
But in order to make the most of this opportunity, the industry needs to attract more young workers, Dottori says. This is one of WRFP’s main challenges, especially given its location in a small, rural community.

“The problem is that nobody wants to take the risk of building a new home in a small community, and so it’s extremely hard to attract families,” he explains.

There’s also increased competition for skilled trades people because the government prioritized training for “social skills” over technical skills in the 1980s, he says. There is more focus on trades skills today, but “there’s a gap there of about 20-25 years where you can’t find middle-aged tradesmen.”

On top of that, when WRFP shut down in the mid-2000s, many of the skilled tradespeople in the community relocated to other areas, leaving a particularly large gap in White River, Dottori says.

The Ontario and federal governments have launched programs providing training opportunities for young people in forestry, to encourage them to enter the industry. In September 2019, the Ontario government announced $2.4 million in funding for two SkillsAdvance Ontario training projects in forestry, including in White River.

These efforts are a step in the right direction, but Dottori believes more still needs to be done.

Despite this, he is optimistic about the future – not just for White River Forest Products, but for the industry as a whole.

“When I started my career, we were the leading industry in Canada, before the petrochemicals took over. But, I think this industry is going to go through a rebirth and become one of, if not the, major industries in terms of manufacturing new products,” he says.