Aug. 16, 2016 - While harvesting fibre for Downie Timber in the Revelstoke, B.C. area this past winter, Mattey Bros. owner Dan Mattey Jr. – better known as Danny to his friends, family and co-workers – realized his operation could benefit from a few upgrades to deal with the bigger wood his crews were harvesting. 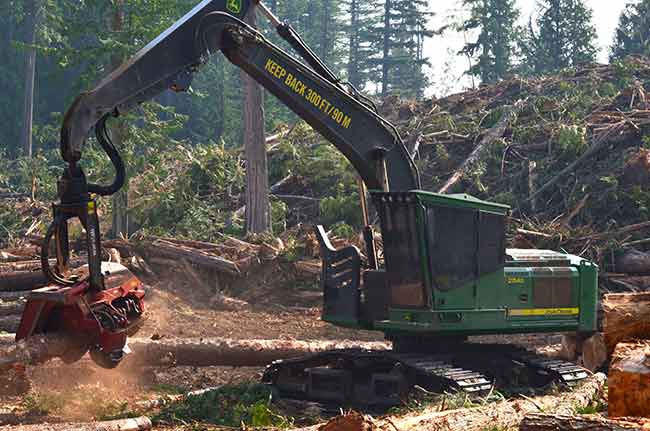 While harvesting fibre for Downie Timber in the Revelstoke

“We were into some bigger wood so we went with the bigger heads,” Danny explains while sitting down with Canadian Forest Industries to discuss his latest investment at his company’s office in Chase, B.C.

Mattey Bros. is far from a stranger to running Waratah machines. The 80-plus-year-old logging contractor purchased its first in the mid-1990s, a 620 Warrior.

“We’ve had good luck with the Waratahs,” Danny says. “All the guys are really comfortable with them. We get good service out of them, they’ve looked after us really well.”

Danny’s son Daniel, who runs one of the company’s processors and supervises operations out in the bush, says he’s noticed a big upgrade in swing power with his company’s latest equipment.

“Compared to the older stuff, the 623C seems to have a lot of power,” he says. “It’s a little heavier and a little slower than the 622C for feeding but the swing power is way more than the 621C – especially with the bigger wood. I’m getting through the bigger wood a lot faster.”

Daniel says the limited downtime he has experienced over the years with his Waratahs has been another reason for opting to go with them over the years.

“They’re reliable. We don’t get many breakdowns, that’s the biggest thing with them,” he says. “And the computer systems have come a long way, too.”

Troubleshooting
When it comes to the harvesting heads, Danny says his crews are able to work with Waratah to diagnose and tackle most of the issues they experience in the bush.

“Our guys phone them for troubleshooting and they do well,” he says. “They get back to you when you call and they usually have an answer.”

Another advantage of the Waratah equipment is that many of the parts are interchangeable from one harvesting head to another.

“With the Waratahs we still have parts that are interchangeable and know the products,” Danny says. “When the guys are used to something they can fix it.”

The fleet
Mattey Bros.’ harvesting fleet is mainly composed of John Deere equipment in the bush and Western Star trucks for hauling logs.

All of Mattey Bros.’ harvester heads are Waratahs, including the new HTH623C, one HTH622C and three HTH622Bs.

Mattey Bros. typically harvests about 350,000 cubic metres annually, selling most of the fibre to Canoe Forest Products in Canoe, B.C., which trades them for cedar logs to supply its plywood plant; or to North Enderby Timber in Enderby, B.C.

With the latest upgrades to their harvesting equipment, Danny and Daniel Mattey are ensuring that their third-generation logging company will continue to feed the local mills and offer employment to its 45 employees for years to come.