Nov. 25, 2016 - Tolko pressed its first board at its oriented strand board (OSB) mill in Meadow Lake, Sask., in the fall of 2003, and for the most part has been pressing boards 24 hours a day, seven days a week ever since. 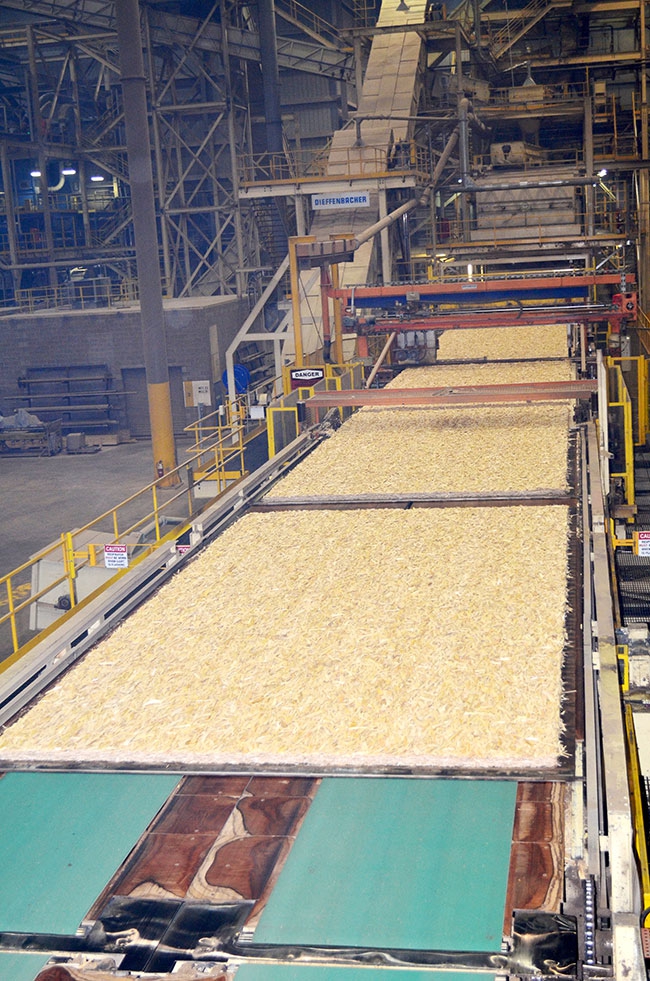 The OSB plant currently employs about 170 people, which makes it a major employer for the 5,000-person town of Meadow Lake, which acts as the main trading hub for northwestern Saskatchewan. This doesn’t include all of the harvesting, hauling and road building jobs related to the logs required to fuel the plant’s need for fibre. And the plant needs fibre – in 2015, the plant produced 640 million square feet of OSB.

As for the plant’s employees, they come from near and far to make their livings in Meadow Lake. It’s not unusual for some of their employees to commute from Prince Albert, Sask., which is more than 250 kilometres away. They even have one employee who drives in from a small town in northern Alberta that is about eight hours away from the plant (he stays in town during his shift rotation and drives home for days off).

As a result of the market conditions created by the economic downturn, Tolko was forced to make the hard decision of sizing its OSB capacity to match the market, and shut down its mills in Slave Lake, Alta, and High Prairie, Alta. When the shutdown took place, the Meadow Lake location became Tolko’s one-stop shop for OSB.

“As Tolko’s only OSB plant operating in the market, we made a lot of products for a lot of people,” explains Greg Johnston, plant manager for Tolko’s Meadow Lake OSB Division. “ This meant a lot of short runs that can hurt productivity.”

The plant was filling hundreds of different orders on a built-to-order basis.

“If you look at a product as a thickness and a grade, we probably make 20 or 30, but when you parcel that up with different wrapping, edge treatment, package sizes, etc., it multiplies pretty quickly,” Johnston says. “Our role as Tolko’s OSB mill has changed now.”

The change came when Tolko decided to re-open the Athabasca mill in Slave Lake in late 2013. Athabasca’s OSB plant has an eight-foot wide press and Meadow Lake operates using a 12-foot-wide press, so each plant is better at producing different dimensions.

“The Athabasca plant is good at making some products and we’re good at making other products, so there’s an opportunity to optimize both operations,” Johnston says. “[For example], if they were going to make a six-foot wide panel, they would have to throw away two feet; while we would need to throw away nothing.”

In addition to optimizing its OSB operations through the use of the two different presses, Tolko invested approximately $14 million in the Meadow Lake operation in a dry fines screening project.

“To make panels we need to achieve a certain test strength and the strength comes from the big strands that we make,” Johnston explains. “The dry screening project classifies the strand and then sorts it and allows us to control where we put the various sizes of flakes in the panel so that allows us to optimize the construction of the panel and how we apply the resin to it.”

This is a vital step in the OSB process because the resins used in the production phase “spot weld” the strands together, unlike the plywood process, for example, where a veneer is covered in a layer of glue.

“The problem is when you put the full range of stand size in the blender the smaller particles have a lot of surface area for the weight of them and they consume more resin than they need in the blender,” Johnston explains. “So we sort these fines out and  put them through a turbo blender, which is a different way to put resin on the small strands… it allows us to reduce our resin consumption and optimize the construction of the board, which allows us to reduce the amount of wood and resin that we have to put in to make the required test strength.”

Tolko worked with the IMAL-PAL Group for the project, which supplied most of the equipment for the upgrades. CMA Engineering managed the installation.

The biggest advantage of the project was that the company was able to increase efficiencies by two to three per cent.

“We spend about $5 million a month on raw materials with wood, wax and resin use,” Johnston says. “So when you talk those large numbers, a few per cent off that is big dollars. We have to get the core of the board up to a certain temperature to get the board to set. The less dense you can make the board, the less mass you have to heat up, and the faster you can run it since the press needs to be closed a shorter period of time.”

Fibre supply
Last year, the log volume consumed at the plant was approximately 900,000 cubic metres, largely made up of aspen. The harvesting operations typically run from June until mid-March.

“One of the wonderful things about OSB is it’s very flexible when it comes to species,” Johnston says. “The woodlands group really deserves a lot of credit both on the contractor side and on the woodlands side. We’ve got contractors that rotate crews in all the way from Atlantic Canada”

This is where Michelle Young, Tolko’s woodlands manager for the plant, and her group come into play.

Young leads a team of people responsible for the operation’s long-term forest management plans and annual plans, including where they’re going to log, doing stakeholder work, getting permits, renewal responsibilities and SFI certification.

“We have about 760,000 cubic metres tenured to us, so then we have to look for the remainder,” Young says.

The Meadow Lake mill is currently consuming about 900,000 cubic metres of logs annually.

The Prince Albert forest management area (FMA) is comprised of 3.4 million hectares that Tolko shares with seven other industry and First Nations partners. Young and her team of planners spend about 40 per cent of their time talking to stakeholders, working with them to create plans that will benefit them and the mill.

“It’s a balancing act,” Young says. “There’s both a softwood and a hardwood user for each piece of land. Wherever we operate we’ve got softwood incidental we send to one of the softwood mills. There’s lots of balancing for us…. It takes a lot of co-ordination between a lot of different people.”

After the debarking process, the logs move via a conveyor through a Metal Shark metal detector and onto the slat conveyor, which pushes the logs into a storage bin.

A Tanguay grapple then picks up the logs and drops them into one of two CAE Stranders, which process the logs into flakes for the OSB boards. The flakes then travel up an inclined conveyor to the wet bins.

When they are ready to be used, they are sent through the plant’s two Buettner dryers, which are fuelled by hot gases generated from burning a combination of wet hog fuel and dry fines from the OSB process in the plant’s GTS energy system.

After hot gases from the heating system enter the dryers, the strand is introduced and are tumble-dried as it is moved from one end of the dryer to the other.

After leaving the dryers, the flakes are separated from the gas stream in large cyclones and are fed onto a conveyor and hauled up to the dry bins for use on the forming lines. The flakes from the dry bins are fed onto a weigh scale and into  COIL Manufacturing blender that applies atomized wax and resin onto the surface of the strands. The resinated strands are then conveyed up the top of the forming station where they are diverted to one of four metering bins. Pivot screws are used to allow the flakes to drop evenly into the metering bins to help ensure proper density. The strands are then metered out for the required thickness of the boards being created and are sent to orientation rolls that orientate the direction of the flakes into the mat. Four separate bins are used: surface layer bottom, core layer bottom, core layer top and surface layer top.

The flake then travels back onto the forming line, through a metal detector. The formed up mats are cut into 24” lengths by a flying cut-off saw and placed onto caul screens. The caul screens are then loaded into the loading cage, which can hold twelve 12’ by 24’ mats. All the mats are transferred simultaneously into a Dieffenbacher press.

The 12’ x 24’ master panels then travel down to Globe Machine Manufacturing OSB trim lines where the first four saws trim and cut the boards into three 4’ x 24’ boards. The three boards are then sent through the second-pass saws where they are trimmed further and cut down into nine 4’ x 8’ boards and are sent to stacking bins.

Once the stacking bins are filled, the boards are sent to the paint booth where an edge seal is added to the bundles. The bundles then travel to the stencil conveyor where the Meadow Lake OSB logo, dimensions and piece counts are applied before entering the strapping line and being stored in the company’s warehouse.

With a focus on producing high-quality OSB with a quick turnaround, Tolko’s is ensuring the future success of its OSB mill and a bright future for the inhabitants of the Meadow Lake area.