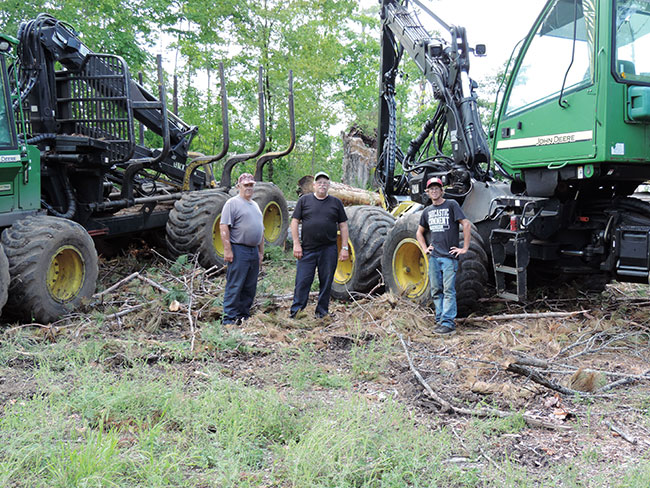 Although the term “family-owned business” may call to mind visions of small mom-and-pop shops with a local focus, family-controlled companies play a huge role in the Canadian forest industry, and are a major driver in the Canadian economy.

Statistics Canada’s most recent data on family-owned businesses states that in 2019 these enterprises accounted for 63.1 per cent of all private sector firms in the Canadian economy and generated 48.9 per cent of Canada’s real GDP in the private sector, or $574.6 billion.

One such family-run enterprise is Herrington Logging, a multi-generational forestry and harvesting company working within Ontario’s Quinte, Frontenac and Peterborough regions – and the surrounding areas – on private, county, and Crown forests. Its owner, Stacy Herrington, 54, beams with pride while telling Canadian Forest Industries about the multiple generations of the Herrington family involved in the business.

Being around for over 40 years, Herrington Logging started off as a one-man-show founded by Herrington’s father, David.

Little did David know he was establishing himself as the first-generation owner of what would be a successful multi-generational family business.

“My dad started the business in the early 1980s. At that time, he cut by hand and used a tractor. He cut mostly cedar,” Herrington reminisces. 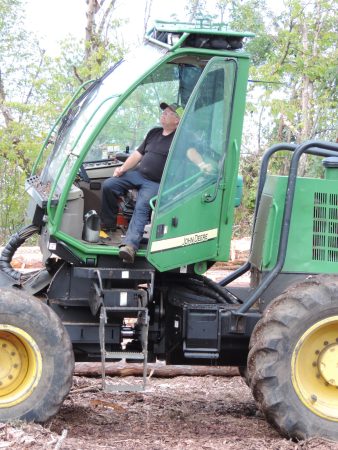 Herrington Logging started off as a one-man-show founded by the grandfather, David (pictured). Photo courtesy of Herrington family.

It took a decade for Herrington to be involved, initially on a part-time basis. It took another 10 years before he devoted his time fully into the business. Then a little short of a decade after, Herrington’s son decided to get in on the family venture.

Herrington recalls that at first, they logged only hardwood for quite a while, selling mostly to Chisholm Lumber.

“We bought our first skidder in the mid-1980s, and our first harvester around year 2000. We had our own log truck for a few years, but found it too difficult to cut and deliver at the same time, so we sold it,” he recollects.

“We just try to keep up with the work and expand slowly. We have just last year bought our second harvester and a second forwarder early this year.”

Like a real family enterprise, when it comes to decision-making, the grandfather, father, and son exchange ideas and decide as a team.

These days, Herrington’s 77-year-old dad, David, still works part-time, running the Puma forwarder, while his 27-year-old son, Derek, operates the John Deere forwarder, the Fabtek harvester, and temporarily forwarding the logs he cut until Herrington can find somebody to add to the team.

Herrington’s wife, Christine, 57, manages the books and provides administrative support to the team.

Herrington Logging’s specialty is working with white and red pine stands and plantations, but the family-run logging company can harvest hardwood and mixed-wood lots as well.

“Most of our work is for Quinte Conservation Authority, with the rest being private and some for the Ontario Woodlot Association (OWA),” Herrington explains.

“It’s very important that we have a logging contractor like Herrington Logging, who has the experience and know-how, during the establishment of our pilot projects,” Pineau explains.

“Stacy’s work is top-notch and really helped us to do a good job,” Pineau adds.

Herrington shares that before beginning harvesting, they work with a certified tree marker to assess and mark forests, ensuring that they meet the highest levels of ecological and sustainable forest management practices.

“We pride ourselves on doing a good job and following the best forestry practises, causing as little damage as possible to any bush we process,” Herrington says.

“A strong and healthy forest is the legacy we strive for,” he adds. 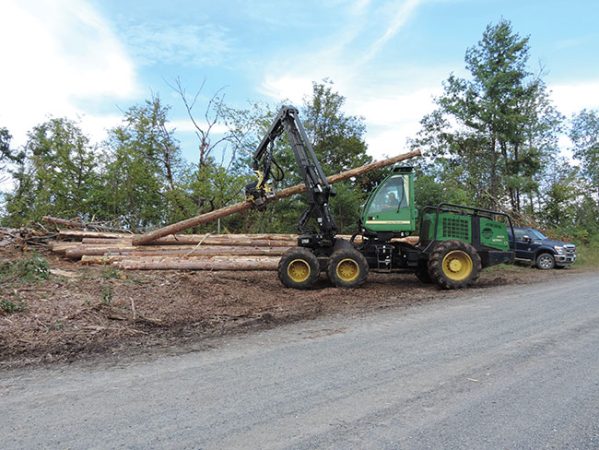 Herrington takes pride in the fact that their clients are all over Ontario.

“The pulp (poplar) that we do get goes to Cascades Containerboard Packaging in Trenton, to become cardboard and paper,” Herrington explains.

“The red pine is taken to Laverne Heideman & Sons in Eganville, to be made into squares and pressure-treated lumber. Any hardwood logs we get go to Chisholm Lumber in Roslin,” says Herrington.

“Fuel wood gets sold to local customers within hours drive … we find the buyers for the firewood, and the log trucks from Laverne Heideman & Sons deliver the wood for us,” he adds.

Every generation that runs the business faces a unique set of challenges.

For the founder David, the biggest challenge at the time was the changing mode of operations – from cutting by hand and using a tractor, to making the big and expensive shift to using mechanized equipment and implementing the use of technology.

For the current generation, just like the rest of the Canadian forest industry, Herrington says the biggest challenge is finding workers to employ.

“I think we are not alone in this struggle. The mills and other loggers also have a hard time finding workers,” Herrington explains.

“It seems like every firm is looking to find workers of any type right now,” Pineau sighs.

Pineau says OWA is working with colleges and universities across the province to engage with students and promote the forest industry.

“I have high hopes with the future grads – the next generation – to carry on the work in this significant industry.”

As for the next generation of Herringtons, it is still too early to tell if they will have an interest in taking over the family business from the previous generation, but Herrington is hoping that a family member would want to play a part in the venture when it is time.

“My grandkids … my three-year-old grandson and my nine-month-old granddaughter – maybe they are the next generation to run the business one day.”