September 21, 2022  By Government of Saskatchewan 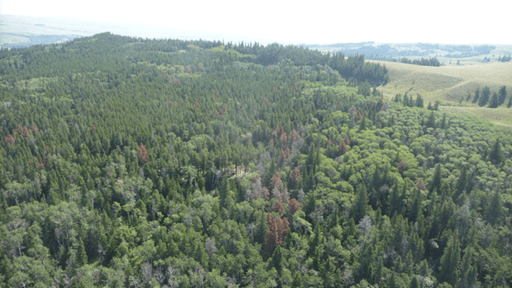 The Government of Saskatchewan recently approved up to $1 million to fight mountain pine beetle in Alberta. The funding supports the third year of a three-year agreement with the Government of Alberta to work together to keep the beetle from spreading into Saskatchewan’s northern forests.

“The mountain pine beetle outbreak in Alberta continues to be the most significant insect and disease threat to our northern pine forests and the northern Saskatchewan economy that depends on them,” Environment Minister Dana Skoropad said. “This funding builds on the long-standing and successful co-operation between our provinces, acting as an investment that ensures our forests stay healthy, while continuing to protect Saskatchewan’s forestry sector.”

The mountain pine beetle outbreak in Western Canada has killed more than half of the merchantable pine in British Columbia and has spread across Alberta. There is an established beetle population in the lodgepole pine forests in the Cypress Hills that is managed jointly by the ministries of Environment and Parks, Culture and Sport.

For more info: Government of Saskatchewan.