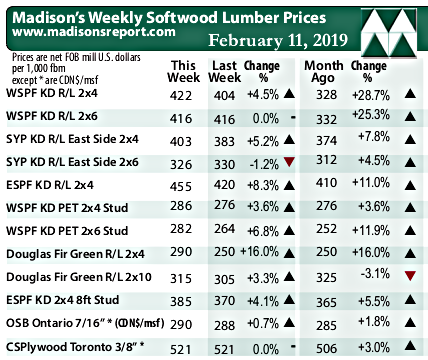 The spectacular rebound of North American construction framing dimension softwood lumber prices in the first week of February continued last week as prices rose yet further in response to transportation problems, mostly on the Canadian railways. Severe weather hit many parts of Canada and the US, causing delays of shipments from softwood lumber suppliers. Customers, already low on inventory as they had been waiting for prices to come down, were forced to buy specific items for immediate fill-in needs. Sawmills responded by raising prices and by going off-the-market on the most popular items, because they didn’t want to quote too far into the future in case prices rise more.

Wholesaler prices for benchmark lumber (net FOB sawmill) commodity Western Spruce-Pine-Fir KD 2×4 #2&Btr started this week at US$422 mfbm, an $18 or +4.5% increase from $404 the week before.

A respite from recent terrible weather, meanwhile, in several target markets helped to ratchet up demand while field inventories among customers remained lower than optimal if not outright depleted of some items. Wholesalers and distributers continued to clean out older inventory at prices lower than replacement levels, yet sawmills were frequently off market for 2×4 and 2×6 #2&Btr and #3/Utility only to come back at boosted asking prices. Rail service in the Western US began to be a problem for everyone from producers to buyers, as pockets of cold weather exacerbated slow and late cars.

Producers of Eastern Spruce-Pine-Fir dealt with a number of swirling factors including: pokey rail service; sporadic buying patterns; pockets of icy cold weather; and, yo-yoing lumber futures. Eastern Canadian sawmills were booked to mid- or late-February for the most part, while secondary suppliers often sold a little below replacement to snatch orders from hungry retailers with waning inventories.

Sales and construction activity slowed down markedly in the US Northeast thanks to a spate of serious winter weather. This week everyone was battening down the hatches in preparation for more frigid fronts in the forecast. A general lack of wood in the pipeline – as well as cross-country shipping problems – kept inventories low.   — Madison’s Lumber Reporter